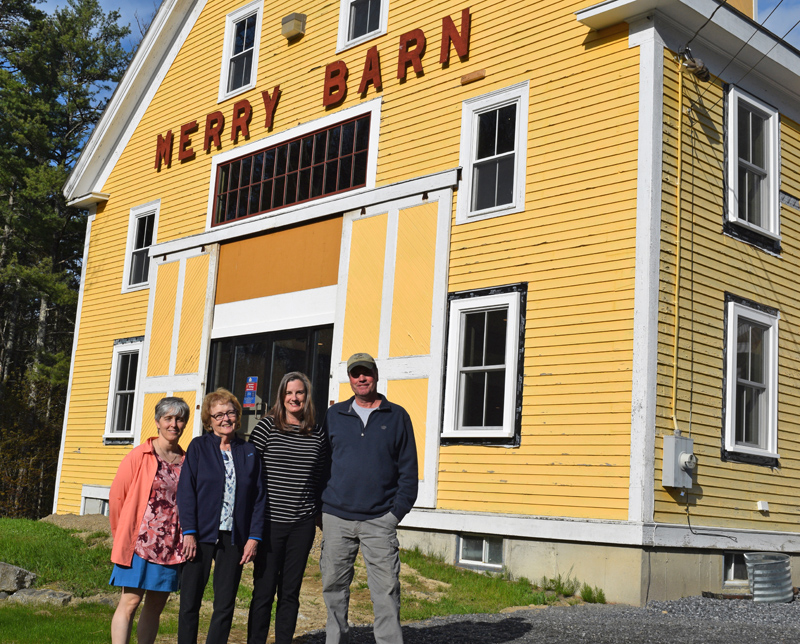 From left: Heather Webster, Ruth Davison, Stephanie McSherry, and Laroy Ellinwood outside Merry Barn. Webster and Davison are the daughter and widow of Howie Davison, who ran a dance hall in the barn; McSherry is the current owner of the barn; and Ellinwood’s parents owned the barn before the Davisons. (Jessica Clifford photo)

From the early 1950s to the mid-1970s, Edgecomb’s Merry Barn was a dance hall where as many as 600 concertgoers would literally make the building shake. Later it was a workshop for a steeplejack business. Now, after months of renovations, the barn is entering a new chapter in its history – as a literacy center.

After months of renovations, the current owner of the Merry Barn, Stephanie McSherry, a literary specialist and teacher in New England schools for more than 20 years, will host her first event June 9.

“I hope this is a place that can become a real haven for our community again, in a little bit of a different form,” McSherry said. “It’s a place that has already brought me so much joy, and I think we all need a little refuge like that.”

The multiple-story barn will be used for summer writing retreats for children, literacy workshops for educators, and a rental space.

Walking into the newly renovated Merry Barn, there is an open space filled with community tables; big, plush couches; a small kitchen; and an enclosed classroom space in one corner.

In the basement is a reading room, with large bean-bag chairs and shelves of children’s books.

The third floor, which will not be renovated for another two or three years, will serve as a rental space for wellness workshops and small concerts, McSherry said.

“The point was to renovate, but to keep it as much of a barn as possible, and to pay tribute to everything that came before. I feel like we did that,” she said.

Neal Groton, of Boothbay Harbor’s Groton Construction Co., was the general contractor and had assistance from area carpenters. Dan Phelps was the architect for the project and received support from Michelle Phelps. The pair owns Phelps Architects Inc., of Damariscotta.

Work began in late November and was mostly complete by early May.

Groton loved working on the Merry Barn because of its ongoing history.

“With any project, I really get kind of romantic and passionate about (it), and just because I love what I do, but here I can actually pause and I could almost hear the music, the square dancing, and the laughter,” Groton said.

McSherry and Grotton came up with the basic concept for renovation of the barn.

Some of the major improvements include building two means to access the upstairs, creating the classroom, and making the basement and main floor Americans with Disabilities Act-compliant, with a ramp and two bathrooms.

The original beams and hardwood floor continue to hold the building in place. An indoor window, which allows people in the classroom to look into the rest of the first floor, consists of glass from an older window that had been located just under the words Merry Barn on the outside.

“I felt like we were being part of living history here,” Groton said of the renovation.

Darby Langdon, an Edgecomb Historical Society volunteer, said the barn was built over a few years. The first barn dance was in July 1905, she said.

In 1768, Joseph Merry acquired the property through a land grant. When he died, the land was split between his children, according to Langdon. The Merrys also owned the property across River Road, where a large white house sits.

The “m” in Skidompha, the name of the library in downtown Damariscotta, is for the Merry family because Charles Glidden Merry was one of its founders, Langdon said.

At different points during the barn’s existence, it has had various uses.

Laroy Ellinwood, of Edgecomb, said his parents bought the barn and the house opposite it in 1949. His father was in the lumber business and there was a lot of timber in the back, perfect for his needs. However, Ellinwood does not recall his dad using the barn, except to store a tractor.

The Merry Barn was only in the Ellinwood family for about three years, when they subdivided the property adjacent to the barn and built a house, he said.

His family sold the barn to the Davisons, who started the dance hall in 1951.

Ellinwood remembered that the late Howie Davison taught square dancing. He also scheduled dances for teenagers and children, in addition to the weekly hootenanny on Sundays, Ellinwood said. A hootenanny is an informal gathering with folk music and sometimes dancing.

“They would come from miles away,” Ellinwood said. “I talked to people all the way from Augusta and almost Lewiston. Not all the time, but every once in a while.”

He attended the dances from childhood through his teenage years, and completed work for Howie Davison when he needed it.

When the barn was a dance hall, it did not have a second floor. Instead it had a catwalk for people to look down at the dancers. A bench lined the inside perimeter of the building, Ellinwood said. A food stand was in the location of the new classroom.

Barry Hathorne, of Edgecomb, who did odd jobs for the owners of the dance hall, said sometimes there were 600 people at the barn.

“With all the kids in here, the barn would be moving. I guarantee it,” Ellinwood said.

Admission to a dance cost about $2 or $3, Ruth Davison said.

Hathorne described the Merry Barn, when it was packed with people, as “one of the biggest parties you ever wanted to go to.”

However, around 1976, the dance hall closed.

“I think it was just a sign of the times,” Ruth Davison said.

Some time later, Joe and Lisa McSwain owned the Merry Barn before selling it to McSherry. The McSwain family used the barn as the headquarters for their steeplejack business.

The McSwains tried to sell the barn and house together, as it had always been a package, McSherry said. However, the buildings were not selling as a package, so they had to sell them separately.

McSherry bought the barn in 2015 to fulfill her dream of opening a literacy center.

“It’s a little more than I could ever imagine,” she said. She said the project was possible through the help of the construction team and the Merry Barn Advisory Board.

The Davison family was delighted to hear about the new chapter in the Merry Barn’s ever-growing history.

“I think my siblings and I are glad that it’s doing something, it’s not just falling apart, being left to be nothing,” said Heather Webster, daughter of Howie Davison.

The Merry Barn will not be open for a set schedule of hours; instead, it will offer programming for the community.

The “summer writing adventures” for children have five-day sessions for ages 7-9 and 10-13.

During the retreats, children will explore different genres, such as graphic novels, poetry, novels in verse, memoir, and writing to change the world. Children will choose their own topics and genres for their writing.

McSherry will offer individual feedback to the children. In addition, children will hear from a published children’s author via videoconference or in person.

At the end of the retreat, an “author’s tea” will be held for family and friends to gather and hear and see the children’s work.

The first summer writing adventure is scheduled for July 8-12 for children ages 7-9.

“We really want kids to have this experience in this area,” McSherry said.  The retreat costs $300. McSherry offers financial aid for families.

In addition to the writing retreats, McSherry will offer three-day literacy workshops for educators.

She already has three scheduled for the summer. The first, “Teacher as Writer: A Key to Thriving Writers’ Workshops,” will take place July 29-31.

At the workshop, educators will reflect on their experiences as writers, examine their current practices as writing teachers, and learn more about the tenets of teaching writing workshops.

Workshop-goers will write across various genres and share their work with others.

Other workshops will look at instructional methods, ways to address students’ needs, and how to tailor existing writing curricula to reach all students in a classroom.

Each workshop will have wellness activities, explore the area during long lunch breaks, and eat treats made by Jennifer Keegan, a local pastry chef.

To sign up for a retreat or workshop, go to merrybarn.com and fill out a registration form.

Local writers groups, book groups, artists, and musicians can rent the Merry Barn by contacting McSherry at 752-2018 or stephaniemcsherry@merrybarn.com.

McSherry said she already has people lined up to host workshops. Some of these include creative writing evenings with Elizabeth Potter; student-centered college essay writing and preparation workshops with Kristen Pett, of Coastal College Advising; and a Memory to Memoir workshop led by Barbara Burt.

Two upcoming events are open to people in the community.

From 1-4 p.m., Sunday, June 9, the public is invited to “Community Writes!” to share and write stories about their memories of the Merry Barn. At the end of the day, McSherry said, she will have a community-written anthology of the barn.

Then, from 10 a.m. to 2 p.m., Saturday, June 29, locals can celebrate the official opening of Merry Barn Writers’ Retreat and Educational Consulting.

Attendees will tour the newly renovated barn and learn about the upcoming summer camps for children, community events, and teacher workshops.