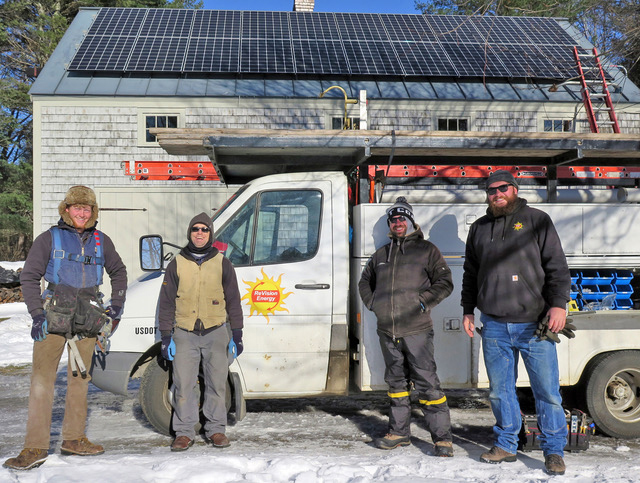 Peter Christine, of Drum and Drum Real Estate, had been noting the increase in solar panel installations around the county, but consistently heard about how the savings in electrical bills translated into a somewhat long payback period.

Believing that an investment in solar might also add to a property’s value, he and his wife, Kris, researched the issue and have engaged ReVision Energy, of Liberty, to install a 20-panel array on their barn roof.

“The efficiency of the panels and the financials have become so favorable that the capital improvement to the property is the driving economic rationale. A reduced electric bill is the gravy,” Christine said.

The Lawrence Berkeley National Laboratory conducted a multiple-state study of the question of added property value for an installed photovoltaic system and determined that a typical residential system would add approximately $15,000 to the value of the home.

“Most if not all of the expenditure remains with the property while 30 percent is also realized to you via your tax return,” Christine said.

Homebuyers are increasingly aware of the long-term benefits of energy-efficient features and will pay a premium for them. Homeowners are able to retain their costs as added capital value, have part of their outlay credited against their tax liability, and enjoy the monthly reduction in the electric bill, as well.

The IRS has extended the credit for qualified solar electric systems through 2021. The credit is currently 30 percent and if the credit is not used entirely, it may be carried forward to the next tax year.