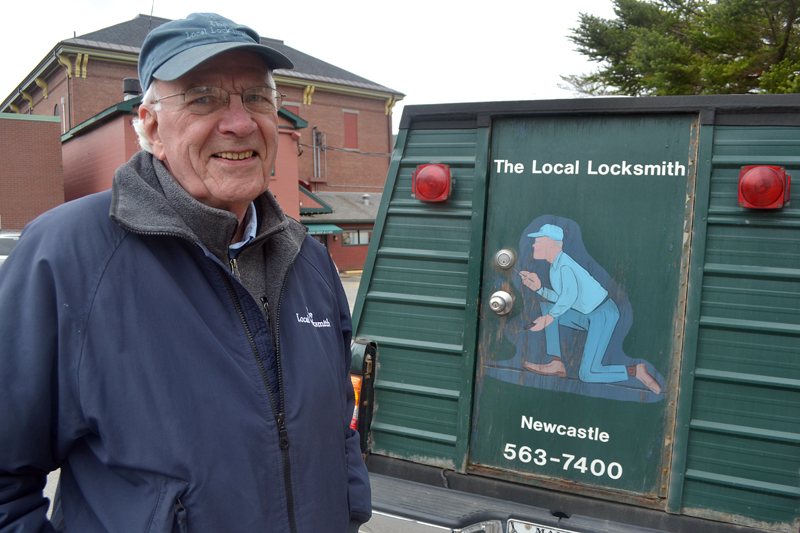 Dick Cleveland, of Newcastle, is looking for someone to take over The Local Locksmith, the mobile locksmith business he started 16 years ago. (Maia Zewert photo)

After 16 years in the business, The Local Locksmith is ready to retire.

Dick Cleveland, of Newcastle, has been searching for someone to take over the mobile locksmith business for the past two years, but now he has set a deadline for the end of 2017.

“By the end of the year, I’m done,” Cleveland said. “I want to find someone soon, so I can spend about six months training them.”

Cleveland got his start as a locksmith in 1998, when he was working in the maintenance department at New England 800 Co., a telemarketing center in Waldoboro. Gail Wright, the owner of Midcoast Locksmiths at the time, was working on the business’s locks one day.

Wright’s work fascinated Cleveland, and he asked Wright to call him if he ever needed help. A few weeks later, Cleveland received a call asking if he would help rekey the Union town office.

“It was fascinating to me,” Cleveland said. “I started working whenever he needed me just to learn as much as I could.”

After a year of training, attending workshops, and collecting tools, Cleveland decided to go into business for himself. He and his wife, Betsy Evans, came up with the name of the business together.

“If you’re in a new area and you need a locksmith, what do you do? You ask who the local locksmith is,” Cleveland said. “So The Local Locksmith became the name of my business.”

Cleveland has a small office set up under the cap on the bed of his truck. Cleveland said his truck acts like a “rolling billboard” for the business.

The Local Locksmith offers a variety of services, from repairing locks to responding to lockouts. Some instances are more memorable than others, like when Cleveland had to unlock a bathroom door to free a dog that had accidentally been shut inside.

“You can never really tell what your schedule is going to be,” Cleveland said. “There are some things you can schedule for a certain day and time, but the rest of it is off the cuff. You have to be prepared to prioritize emergencies as they come up.”

Although he still enjoys the work, Cleveland said he hopes to sell The Local Locksmith to find out what’s next for him.

“I was 59 when I started this, and now I think I’ve reached the point where it’s time for me to reinvent myself,” Cleveland said. “I have an attitude that there’s work all around you, you just have to go look for it. That’s how I got into this, and now I’m ready to do something else.”

Cleveland said he looks forward to traveling and visiting friends and family once he sells the business, but first he wants to find the ideal person to take over The Local Locksmith.

“They need to be serious about this and willing to learn,” Cleveland said. “There are lots of little things that go into this job, and you have to take the time to learn about it.”

Cleveland plans to take applicants with him on various jobs to teach them some of his techniques, he said. While his truck is not for sale, he is selling his mobile office, which can fit onto a truck with a 6-foot bed.

Any candidate for the job must pass a background check, Cleveland said.

For more information, call 563-7400 or go to thelocallocksmith.net.