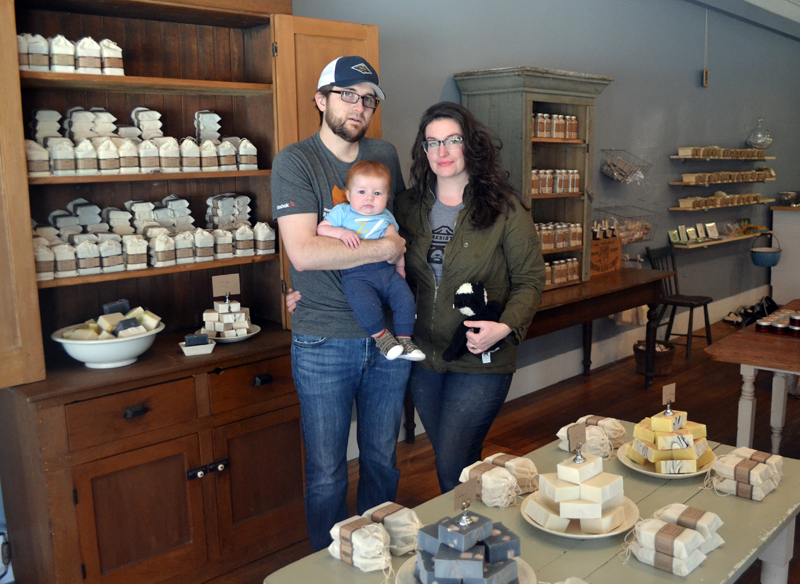 For the past decade, Amanda Nelson has owned and operated Long Winter Soap Co. out of her Damariscotta home. Now she is bringing the soap, lip balm, and perfume business to downtown Waldoboro.

Nelson and her husband, Lucas McNelly, will celebrate the grand opening of the store, at 11 Friendship St., on Saturday, May 6.

Long Winter Soap Co. began out of necessity when Nelson’s second daughter, Lucy, was born in 2007. Lucy, a redhead, was born with neonatal acne and eczema and had “incredibly sensitive” skin, Nelson said.

“I was obsessed over the ingredients in everything that went on her skin because she reacted to just about everything,” Nelson said.

Nelson decided to make her own soap that would not affect her daughter’s skin. She created the soap, a mixture of lye and water with oils, using the cold-process method. Unlike in the hot-process method of soap making, which involves cooking the soap, the mixture is poured into a mold to cure.

The soap can be used the day after it is poured, but the longer the soap is allowed to cure, or harden, the longer the bar will last. Long Winter Soap Co. products cure for four to six weeks.

Nelson’s first foray into soap making was a success, and she continued to make other body care products for her daughter, including lip balm, perfume, and body cream. She later decided to sell her creations on Etsy, an online marketplace for handmade, vintage, and craft items. In January 2010, Long Winter Soap Co. was named one of Etsy’s featured sellers, resulting in a massive uptick in sales that caused Long Winter Soap Co. to outgrow Etsy and start a new website.

From 2013 until this month, Long Winter Soap Co. remained an online-only store with wholesale customers around the world, including Lip Balm Land in Melbourne, Australia. McNelly and Nelson, with employee Kat Rogers, made all the products utilizing three rooms in the family’s Damariscotta home. 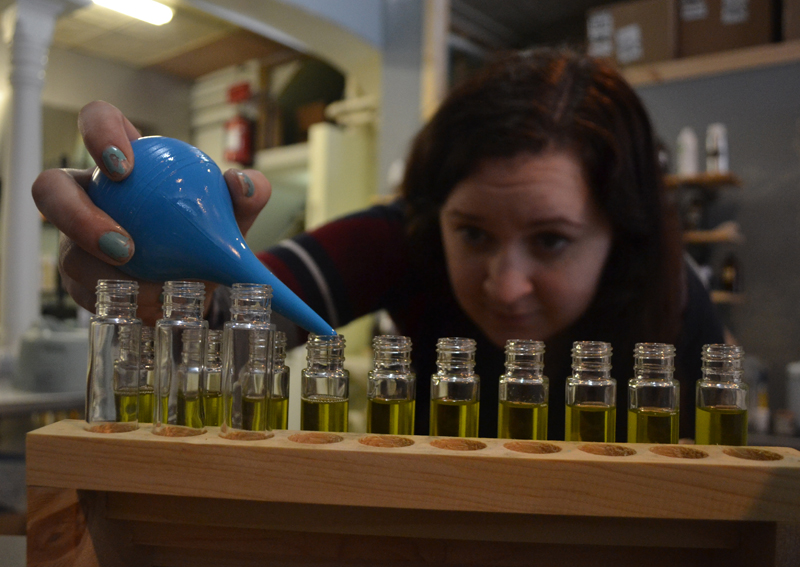 Inspiration for scents and flavors can come from almost anywhere, McNelly and Nelson said. From the Morning Person soap, which includes notes of geranium, peppermint, patchouli, and sweet orange; to the Unicorn Farts lip balm, which smells like spearmint and pink cotton candy, the website’s inventory is constantly changing based on what McNelly and Nelson choose to make on any given day. The company has created more than 100 lip balms, 100 perfumes, and 40 soaps.

One recent moment of inspiration led to another big boost for the company. During the final presidential debate in October 2016, then-Republican presidential candidate Donald Trump referred to the Democratic nominee, Hillary Clinton, as “such a nasty woman.” The remark spawned Long Winter Soap Co.’s most popular product.

“I was almost asleep when (Amanda) was reading about the debate, and she said something about creating a nasty woman lip balm,” McNelly said. “So the next morning we created a label mock-up, posted it on the website and Facebook, and then went to make coffee.”

The Nasty Woman lip balm, flavored with coffee and walnut, is for times when people are “in the mood for pairing nuts and scalding hot coffee,” according to the product description on the website.

The product “blew up,” Nelson said, resulting in 13,000 orders worldwide. Friends came in to help label and pack orders for shipment.

In addition to politically inspired lip balms, Long Winter Soap Co. also donates a portion of its proceeds from the sales of certain balms to charity. A percentage of the Puppy Kisses lip balm sold at The Animal House in Damariscotta go toward the Lincoln County Animal Shelter.

All proceeds from the Ahlan lip balm are donated to NuDay Syria, an organization run by a friend of the couple, Nadia Alawa. NuDay Syria donates items to Syrian families and orphans in refugee camps.

McNelly keeps statistics for the MVHS girls basketball team, and the family travels to watch the teams play. Each member of the team received peppermint hot chocolate lip balms, called Lady Panther, from Long Winter Soap Co. with their name and numbers on them. 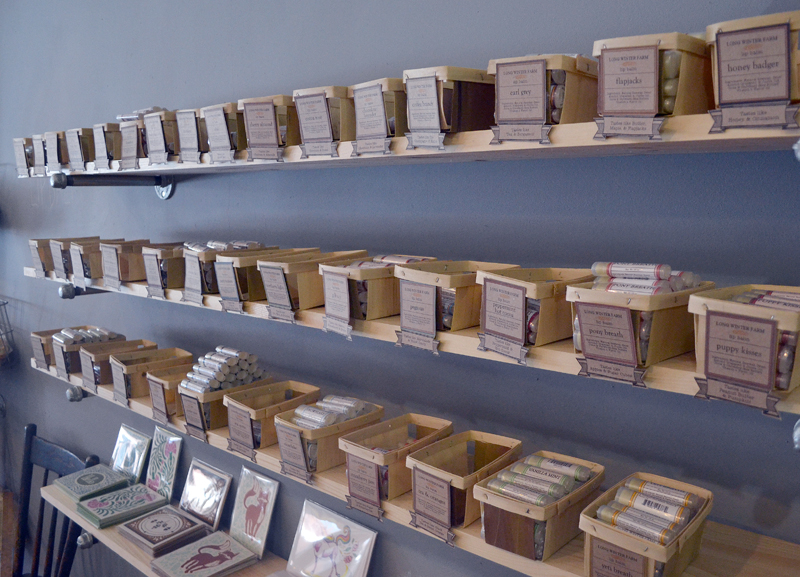 While a storefront was always in the back of their minds, Nelson said it would have to be a perfect location in order to move the business. In February, Nelson and McNelly found that perfect location at 11 Friendship St. in Waldoboro.

The building was formerly home to a bakery, a law office, a hardware store, and Fessenden Craft and Bead Supplies. When he was growing up, McNelly and his father would visit the store to buy gifts for McNelly’s mother.

Since getting the key to the building in February, Nelson, McNelly, and Rogers have been in the process of painting, renovating, and moving production to the new location. Online orders will ship from the store.

While the website and permanent location will share inventory, there will be some exclusives only available in store, including sugar scrubs and bath bombs, which are currently in the research-and-development phase, Nelson said.

Currently, McNelly and Nelson plan hours of 10 a.m. to 5 p.m. Tuesday-Thursday, 10 a.m. to 6 p.m. Friday and Saturday, and noon to 4 p.m. Sunday. The store will be closed on Mondays, and hours will vary during Medomak’s basketball season.

As they were preparing to open the store, McNelly and Nelson said it wasn’t uncommon to see people walking along the sidewalk peeking through the windows, trying to get a glimpse at the progress.

“People have been curious and excited to have something here,” Nelson said. “And we’re really excited to be here with them.”

For more information about Long Winter Soap Co., go to longwinterfarm.com or find the business on Facebook and Instagram.