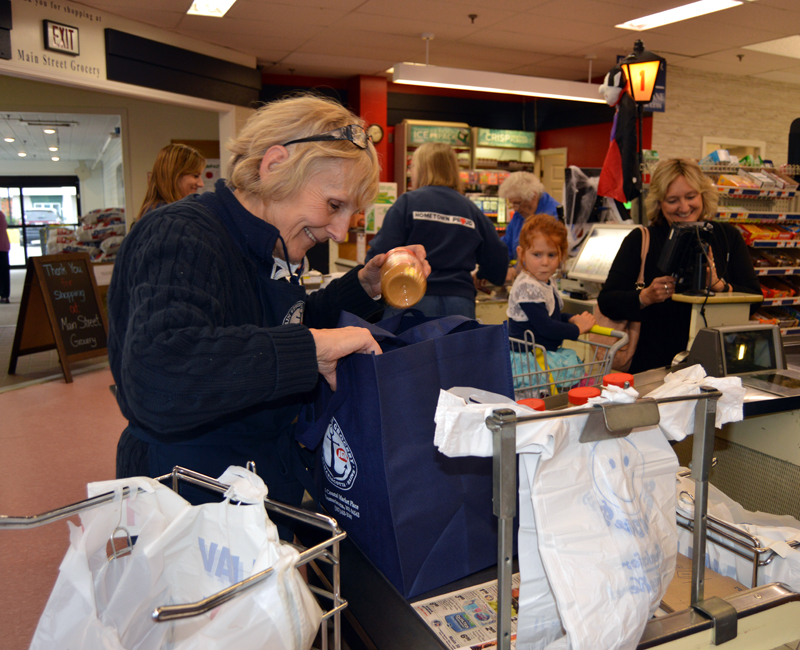 Carol Simmons places a jar of peanut butter in a reusable bag at Main Street Grocery in Damariscotta on Friday, Oct. 12. The store is introducing a new program to encourage the use of alternatives to plastic bags.

As Damariscotta prepares for an Election Day referendum on whether to ban plastic grocery bags, one grocery store is introducing a program to encourage alternatives.

Main Street Grocery will take 5 cents off for every bag a customer brings in and uses in place of a bag from the store.

While Damariscotta’s proposal would impose an outright ban on plastic bags, other towns charge a fee per bag. Main Street’s owners prefer to reward customers who reuse bags rather than punish those who do not.

“That way, it will help the environment and everyone can feel like they’re doing their part without being told they have to use reusable bags,” co-owner Jane Gravel said.

Jane Gravel and her husband and co-owner, Gary Gravel, did not support the town’s proposal at first. Earlier drafts would have also banned plastic foam, but the store uses foam trays to package meat.

The difference in cost between the foam trays and the least expensive alternative is the difference between a viable business and a vacant storefront, according to Jane Gravel.

“The marine environment is important, but you have to look at your businesses as well,” she said. The town did, removing plastic foam from the draft ordinance.

“We were not for the ordinance as first written,” Jane Gravel said. “However, taking the small steps, such as plastic bags, I think is the right step for this area, especially since we’re on the coast.”

The store will continue to offer the new incentive regardless of whether the ban passes.

Main Street Grocery is taking other steps to combat pollution as a result of plastic bags. The store accepts plastic shopping bags for recycling, with a collection box in the entryway.

In addition to the so-called “single-use” or “T-shirt” bags, the store accepts other types of plastic bags and plastic wrap, like the plastic around a case of bottled water.

The plastic goes to a recycling plant in Connecticut, according to Jane Gravel.

Damariscotta will vote on the plastics ordinance on Election Day, Nov. 6.