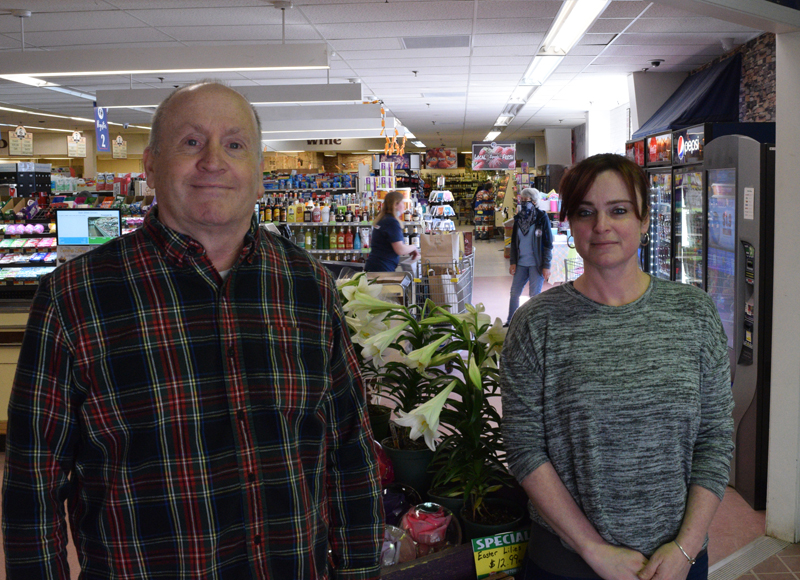 The new owner of Main Street Grocery, Greg Snyder, stands with store manager Julia Small in front of the popular “rose globe” item on April 15. The rose globe is a featured product from the Damariscotta store’s new distributor, Associated Grocers of New England, that has been selling fast. (Evan Houk photo)

Damariscotta’s Main Street Grocery will have a new look once the IGA logo is eventually removed from the building, but those running the store want it to remain the same friendly neighborhood grocery store locals have come to know and trust.

“It’s the same place, the same people, and we’re looking to keep it going strong,” store manager Julia Small said during an interview with her and new owner Greg Snyder on April 15.

Small will be managing the store along with Melissa Pierce, the grocery manager who has worked at the store for 35 years and is married to Don Pierce, one of the brothers who owned the store when it was Yellowfront Grocery.

After Snyder took over the store in January, Small and Pierce made the decision to switch from an IGA distributor to the Pembroke, N.H.-based Associated Grocers of New England because it is a “better deal” and will keep costs low for customers, Small said. The store will also be able to access more Maine products out-of-season, like organic lettuce and potatoes.

“It really was in everyone’s best interest,” Small said.

The product selection will essentially remain the same, only with a different brand name. The managers are always willing to listen to customers if there is a certain product they would like to see on the shelves, Small said.

Some new and specialty products will be showing up on the shelves, like the “rose globe” that has been a hot seller recently, Small said. The store also plans to hold “truckload” meat sales and other promotions and events with the help of Associated Grocers of New England.

Small has been working at the store for three years and said she knows nearly everyone’s name that shops there, a fact that adds to the community feel of Main Street Grocery.

“I love the customers and the people I work with,” Small said. “I look forward to going to work every day.” 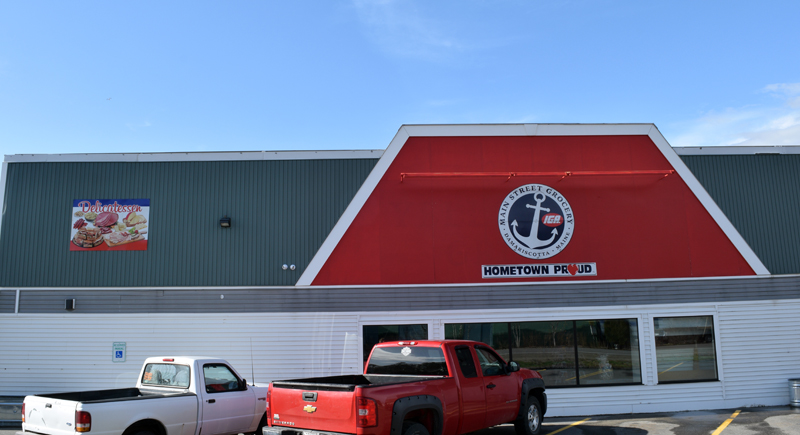 Main Street Grocery in Damariscotta on April 19. The IGA logo will soon be removed because the store has dropped the IGA brand and switched to Associated Grocers of New England as its distributor. (Evan Houk photo)

The reasons Snyder decided to buy Main Street Grocery from local business owners Gary and Jane Gravel are similar to the reasons he bought the convenience store Hilltop Stop from them in January 2021 – the employees and the community atmosphere.

“They have a great team,” Snyder said. “It’s been working well.”

He said he will be taking a more hands-off approach to the day-to-day operations, similar to Hilltop Stop, and trust the co-managers to run the store.

“I don’t want to change the atmosphere,” Snyder said.

Snyder, a resident of Sidney, also expressed a desire to become more involved in the Damariscotta community, similar to the Gravels.

Snyder has owned and operated the Twins Country Store in Augusta for 12 years and previously owned the Hilltop Superette in Portland for two years.

Main Street Grocery will continue to host the Central Lincoln County YMCA “Fill the Y Bus” event every other Friday, where customers can purchase extra food to donate to those in need. Monetary donations for the Y bus can also be accepted in-store or over the phone anytime, Small said.

During the transition in ownership, the store could not accept payment through the federal Supplemental Nutrition Assistance Program, or food stamps, for a short period of time because of delays in processing the new owner’s application with the U.S. Food and Drug Administration, Small said.

The history of Yellowfront Grocery dates to 1921, when Linwood “Mutt” Pierce opened Pierce’s Meats in the Lincoln Block. The business has been passed down since, from Mutt to his son, Edward “Eddie” Pierce; to Eddie’s brother, Linwood Denham Pierce; to Don, Jeff, and Steve Pierce.

Don’s wife, Melissa Pierce, has worked at the grocery store since she was in high school, even before she met Don, Small said.

The Gravels purchased the store in 2018, making improvements and expansions.