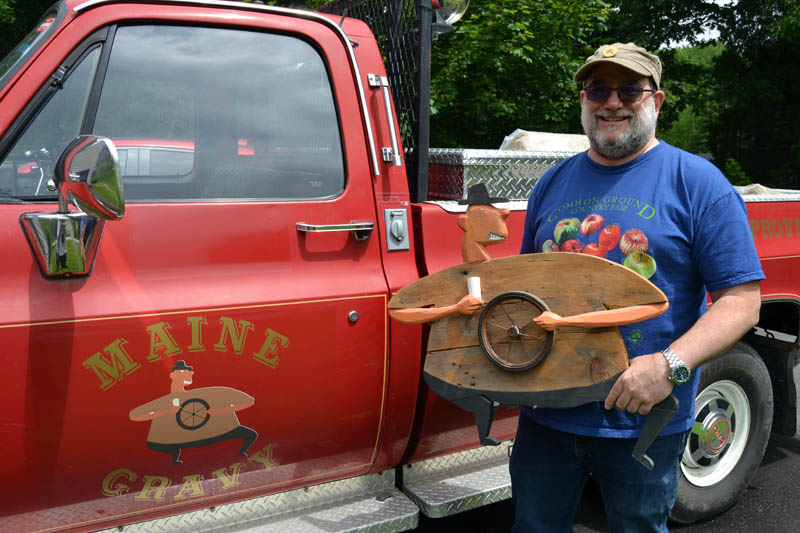 Maine Gravy owner and “saucemaster” Dick Chase holds Dave, the inspiration behind his hot sauce company’s logo, in front of The Heatmobile. Chase, of Damariscotta, received permission from William “Bill” Skrips, the artist who created the piece, to modify Dave for the Maine Gravy bottles on Chase’s line of hot sauces. (Maia Zewert photo)

In the mud room of Dick Chase’s Damariscotta home grows seedlings of ghost peppers that will appear in the next batch of his hottest hot sauce.

Chase is the owner and “saucemaster” of Maine Gravy, producing a line of hot sauces made with local products and produce. Sources include Goranson Farm in Dresden, Go-En Fermented Foods in Whitefield, Sewall Orchard in Lincolnville, SweetWoods Farm in Newcastle, Tarbox Farm in Westport Island, Thirty Acre Farm in Bremen, Gryffon Ridge Spice Merchants in Dresden, and others across the state.

“My whole reason for doing this up here and turning it into a business was to put together Maine products and offer them,” Chase said. “Hopefully selling goes along with it!”

Chase began making hot sauce for fun years ago when he lived in Massachusetts. Over the years, he started experimenting by adding miso, Sichuan peppercorn, and star anise to the recipes.

“Then it became something I loved,” he said.

Chase has been visiting Maine since he was 10 years old, and was always impressed with the organic movement and the community of productive small farms in the state. When he and his family purchased a home in Damariscotta in January 2020, he decided to turn his love of hot sauce into a business.

The name of the business, Maine Gravy, pays tribute to Chase’s roots.

“I grew up in Rhode Island, which has a very large Italian population, so we always called tomato sauce and other sauces gravy,” Chase said. “I needed a name that’s unique, and there was no one else calling (hot sauce) gravy.” 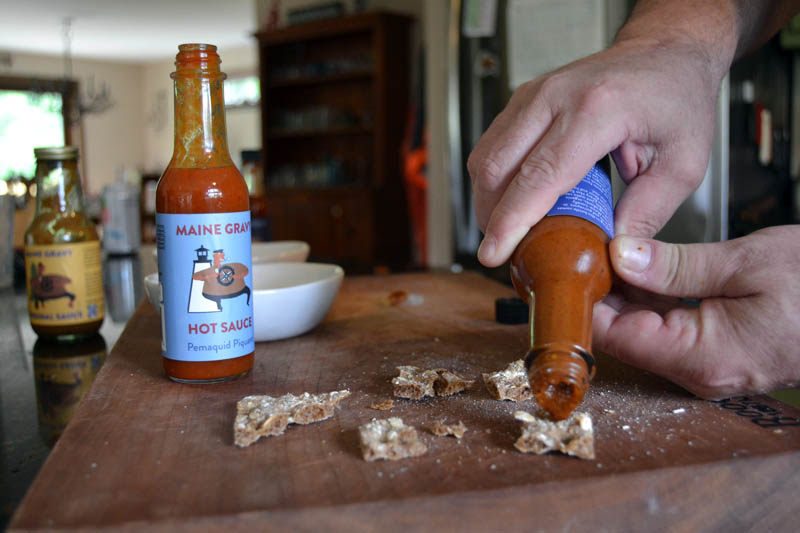 Dick Chase pours a drop of Maine Gravy’s MidCoast Mayhem onto a cracker in his Damariscotta home. Chase focuses on using Maine ingredients in his four sauces. (Maia Zewert photo)

Also unique to the Maine Gravy is the origin story behind its logo. Over a decade ago on a family trip, the Chase family picked up a hanging piece of found-wood art, resembling a man, created by artist William “Bill” Skrips. The family affectionately refers to the piece as “Dave” and he has been a cornerstone in the living room of every home, Chase said. The family even makes sure he’s decked out for every holiday with lights or costume pieces.

As Dave has been such a huge part of the family, Chase wrote to Skrips to ask if he could use a rendering of the piece as Maine Gravy’s logo. Skrips agreed.

“And now I get to play with him,” Chase said. Each Maine Gravy label contains a different Dave. In one, he is holding a ship’s wheel in front of Pemaquid Point Lighthouse while in another he has yellow galoshes and a rain hat as a thunderstorm rages behind him.

Maine Gravy currently has three hot sauces and a marinade to its name, all of which are available for purchase on the business’s website and local retailers, including Fisherman’s Catch, Riverside Butcher Co., The Hub Farm Market & Oysteria, Broad Arrow Farm, and Seagull Gift Shop and Oceanfront Restaurant.

For the brave, Damariscotta Damnation contains chocolate ghost peppers and Carolina reaper peppers. Chase grows the peppers for this sauce in his backyard, resulting in limited quantities of the sauce.

“I’m big on alliteration,” Chase said about his sauce names.

Finally, there’s Maine Gravy’s original sauce, an almost all-purpose sauce that can be used as a barbecue sauce, a marinade, or even combined with mayonnaise to create an aioli, or “Maineonnaise,” as Chase refers to the concoction. 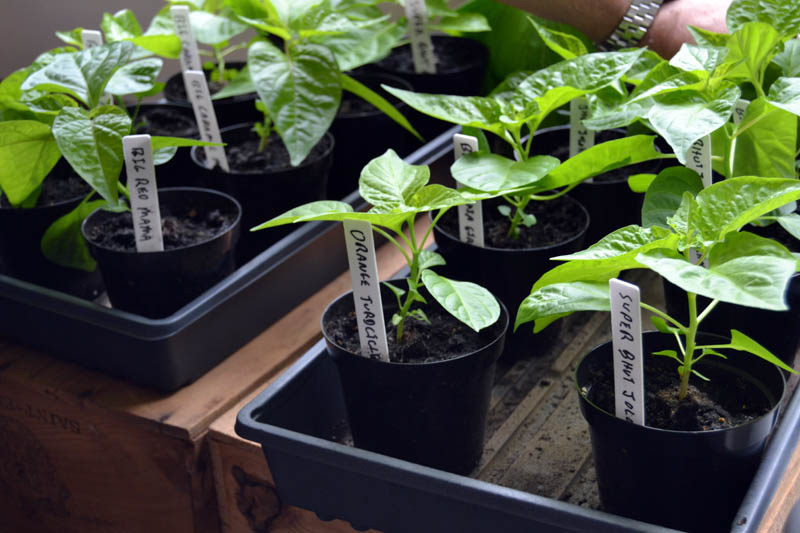 Some of the hot pepper seedlings growing in Dick Chase’s Damariscotta home. The peppers will be used in Damariscotta Damnation, the hottest of Chase’s Maine Gravy hot sauces. (Maia Zewert photo)

Chase makes all of his sauces at Fork Food Lab, a shared kitchen space in Portland that has a steam kettle to keep the sauce at a constant temperature while it cooks. Plus, Chase said, it keeps the smell of hot peppers out of his house.

“Cleaning up the pots afterward is the worst part … it’s like you’ve been pepper-sprayed,” Chase said. “My biggest advice to anyone wanting to prepare something with hot peppers is wear rubber gloves … and be careful around your eyes!”

While the recipes remain constant, there can be a little bit of variety in the taste of the sauce, depending on the produce.

“Like anything farm grown, the taste is dependent on how wet it is, how dry, how much sun it got,” Chase said.

This year, Chase worked with about 200 pounds of peppers, something he plans to quintuple next year. He also plans to experiment more with aging the sauce in whiskey barrels from Split Rock Distilling in Newcastle.

His focus for the entire business, however, will remain on keeping the ingredients as local as possible.

“If it doesn’t grow here, I at least want to get it from a local supplier,” Chase said. “I think that’s how we all help Maine companies to grow.”