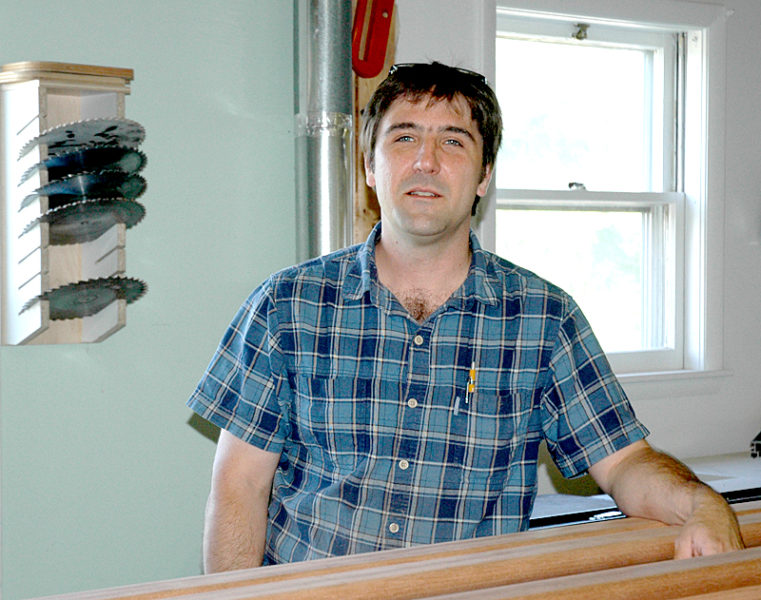 A Bremen man’s woodworking company has become the first tenant of the BugTussle Brooder, the small-business development center at the former Fieldcrest Manor Nursing Home in Waldoboro.

Jesse Collins owns Medomak Woodworking LLC, and has transformed a portion of the building into a woodworking workshop. He first moved his materials into the location in April.

Seth Hall, of Waldoboro, managing member of S and J Llama LLC, acquired the former nursing home at 126 Depot St. in August 2016 with the intent to redevelop the site as BugTussle Brooder, a home for local businesses and startups. The roughly 20,000-square-foot former nursing home sits on 13 acres.

Collins said his business takes up approximately 1,400 square feet of the building, which is a nice fit. Surrounded by his equipment and working to the old-timey sounds of Old Crow Medicine Show, Collins has made the space his own.

Collins, a woodworker who crafts rough lumber from sawmills into custom cabinetry and furniture, is originally from Dresden. He is a graduate of Lincoln Academy in Newcastle.

He organized the LLC in early 2017, but has been involved with cabinetry for roughly five years on his own. He worked in a local cabinet shop for six years before going out on his own.

Collins said his career in woodworking started as a summer job.

“I was 20 years old and figured I’d get a job as a carpenter for the summer. It’s not something I thought I would be doing at this age,” Collins said.

Collins said the former Fieldcrest is an ideal location for his business, because he lives in Bremen, while most of his clients reside in the Camden and Rockport area.

“It’s a short drive from home. I live in Bremen and wanted something close to Route 1,” Collins said.

Collins said he works on a variety of projects, from mahogany railings to custom kitchen cabinets, pieces for libraries, and built-in cabinets for bedrooms.

Collins said his favorite part of being a woodworker is seeing his projects evolve from ideas to finished products, while working with clients to make their vision a reality.

“Developing a project is pretty rewarding for me. Working with clients to find out what they want and help them develop the idea is fun,” Collins said.

Hall acquired the former nursing home from LincolnHealth, which purchased the property after the nursing home closed in 2008.