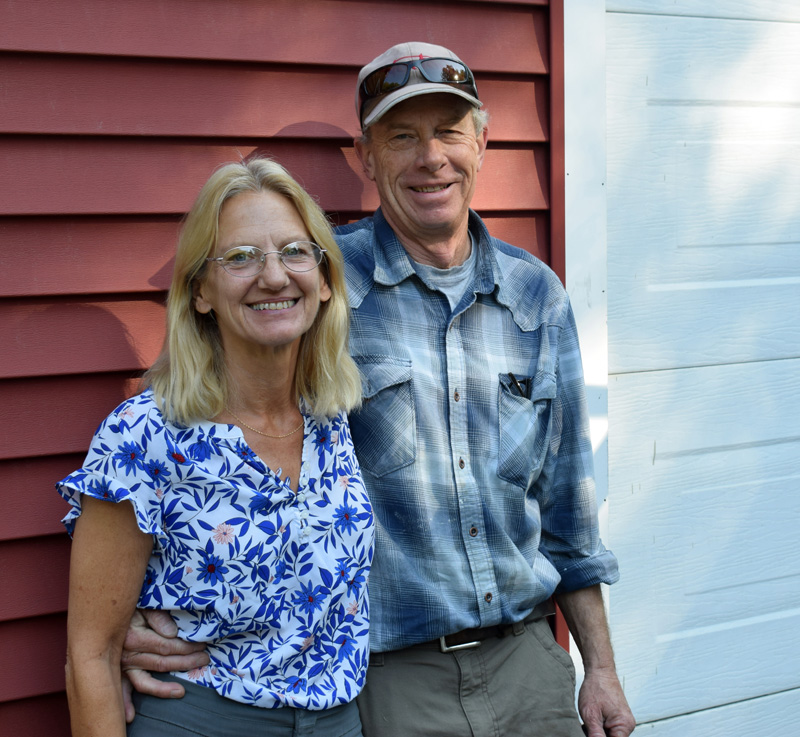 Cathy and David Cushing stand next to the Mobile Glass Service Inc. building in Bristol . The husband-and-wife team have retired and hope to sell the business and building to another glass repair entrepreneur. (Evan Houk photo)

The owners of Bristol-based Mobile Glass Service Inc., David and Cathy Cushing, are retiring after 35 years in the business and hope to sell the building and business to another willing entrepreneur.

“We would love to find someone who wanted to continue the glass business,” Cathy Cushing said during an interview on Friday, Oct. 8. “The community wants it.”

There is plenty of work in Lincoln County, she said, that allowed the husband-and-wife team to stay busy, even without advertising the business for the past six years.

“Someone could certainly open up year-round again and bring back auto glass, whatever they wanted to do. There’s a need for it,” Cathy Cushing said.

Cathy and David started the business in 1986, operating out of David’s father’s “hen pen” in New Harbor, originally intending to be a mostly mobile business.

“The original idea was to be mobile,” Cathy Cushing said. “Then we found there was a need for in-shop work.”

The Cushings contracted South Bristol builder Ken Lincoln in 1988 to construct their current building at 710 Bristol Road, which they have operated out of since 1988.

One time, when working out of the hen pen, David Cushing said they drove a large GM vehicle in to work on it.

“We drove into the hen pen and went right through the floor. Not that there was much space between the floor and the ground,” David Cushing said.

Cathy Cushing said she would do hundreds of screen repairs each year in the shop and cut glass for artists, while her husband predominantly worked on the glass repairs.

“I’m not one to sit around. I want to learn these little things, and I did over the years,” she said.

She also kept the books and appointment schedule and performed all the other office functions.

For the past 20 years, the business was seasonal so the Cushings could spend the winter in the warm sun of Arizona. They now plan to do more traveling and enjoy their retirement.

“We’re ready to see the rest of the world,” David Cushing said.

The Cushings also plan to return to Maine in the spring and explore more of their home state.

“We’re going to come home in the spring and have a Maine vacation for the first time,” David Cushing said.

David and Cathy both graduated from Lincoln Academy and married in 1986, before starting their business.

“There’s no place better to grow up than where we are now,” David Cushing said.

David Cushing got his start in the glass industry in high school, when it was suggested by his guidance counselor that he learn a trade. He went to work for Dirigo Glass in Newcastle before it moved to Biscay Road in Damariscotta and was sold to Portland Glass.

The Cushings said that most of their work was in Lincoln County, although on one special job, they traveled to Massachusetts to install combination windows in a large house owned by the owners of the Boston Globe.

“That was extreme, we never went around,” David Cushing said.

The Cushings said they always stayed busy after opening Mobile Glass due to being known in the community and word-of-mouth.

“The area’s grown, certainly over 30 years, and in the last two a lot of people have moved here,” Cathy Cushing said.