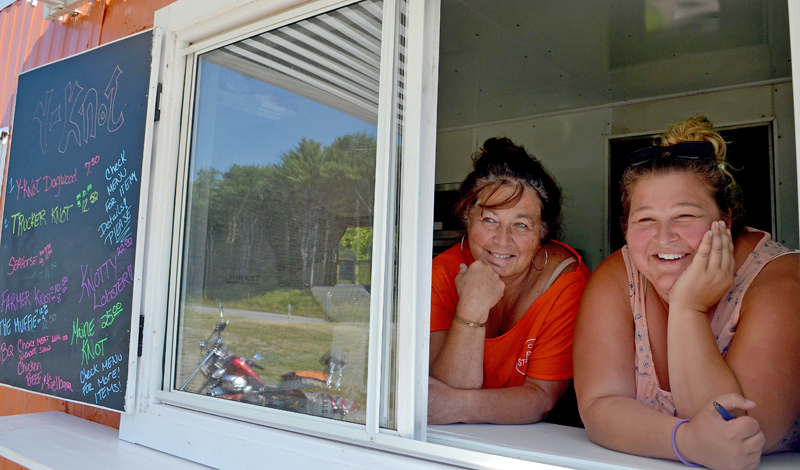 A mother and daughter have teamed up to open a food trailer offering a variety of sandwiches and desserts at 928 Route 1 in Newcastle, next to the Sherman Marsh rest area.

Newcastle residents Carol Heaberlin and her daughter, Mindy Jones, co-own Y-Knot, which opened for business Tuesday, July 18. Heaberlin brings years of experience at eateries and delis along the East Coast, including the former Seymour’s Subs and Cash and Carry convenience store in Boothbay Harbor.

The duo had been discussing the idea of starting a business together for a while, when Heaberlin’s son, Nick Heaberlin, discovered the Rotary Club of Westbrook-Gorham had a trailer for sale.

“We thought it was perfect for what we wanted to do and went with it,” Jones said.

After purchasing the trailer in April, Heaberlin, Jones, and their families began an “extensive” renovation project, essentially gutting the trailer to its shell before installing new appliances, Jones said. The exterior of the trailer received a fresh coat of paint.

Heaberlin and Jones then needed to locate a home for the trailer. Heaberlin’s husband, Rick Heaberlin, approached Pauline Steele about her property along Route 1. The lot was most recently home to All the Comforts and First Class Florals, but a fire badly damaged the building in 2013 and it was later demolished. The lot has also been home to an ice cream shop and a nautical shop. 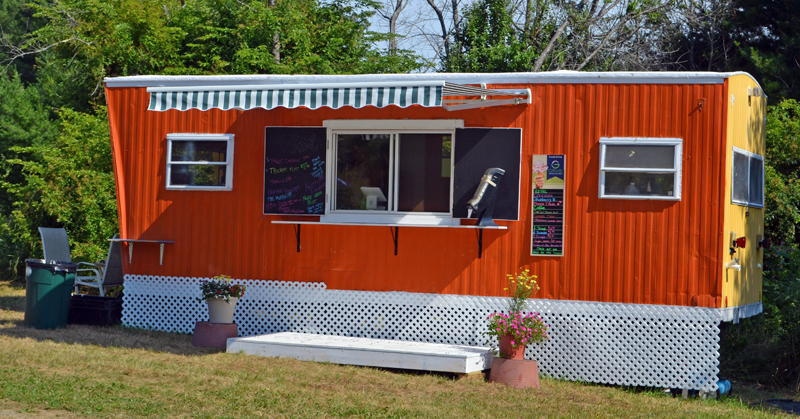 As “one of Newcastle’s kindest residents,” Steele was thrilled to rent the space to the women, Jones said.

The sandwich menu features customer favorites from Heaberlin’s days at Seymour’s Subs that have been renamed to fit the new business. Sandwiches include the Seahorse, made with tuna, sprouts, avocados, and Swiss cheese; the Farmers Knot, which consists of chicken salad, bacon, provolone cheese, and Y-Knot’s red relish; and the Y-Knot Dagwood, an improved version of the sandwich from Seymour’s Subs, Heaberlin said.

Heaberlin enjoys creating new sandwiches and dishes, and the food truck will feature a rotating menu of specials. She’s currently working on a mustard-based, sweet-and-spicy coleslaw she plans to pair with roast beef and barbecue chicken and beef, she said.

Jones primarily handles the customer service side of the business and develops desserts. One of her creations is the Sweet Little Piggy, a sundae that combines vanilla ice cream with maple syrup and bacon bits.

Other items on the menu pay homage to family members. The Knotty Lobster, which includes Texas toast, lobster, and Y-Knot’s seafood stuffing, is a recipe from Heaberlin’s father-in-law, while the Ricky Float, consisting of sparkling lemonade and vanilla ice cream, is named for Jones’ son, Rick-Wyatt.

Even the business’s name has family significance. The Y is for Yereance and Young, Heaberlin’s maiden name and the maiden name of her mother, Micky, who passed away in September 2016. Micky’s influence is spread throughout Y-Knot’s menu, Heaberlin said.

Y-Knot is open from 11 a.m. to 7 p.m. Tuesday-Saturday and noon to 5 p.m. Sunday. The schedule is subject to change, Jones said.

Heaberlin and Jones hope to keep Y-Knot open in some form year-round, they said.

“Everyone’s welcome, but our number one priority is going to be keeping the locals happy,” Heaberlin said.

For more information about Y-Knot, find the business on Facebook.