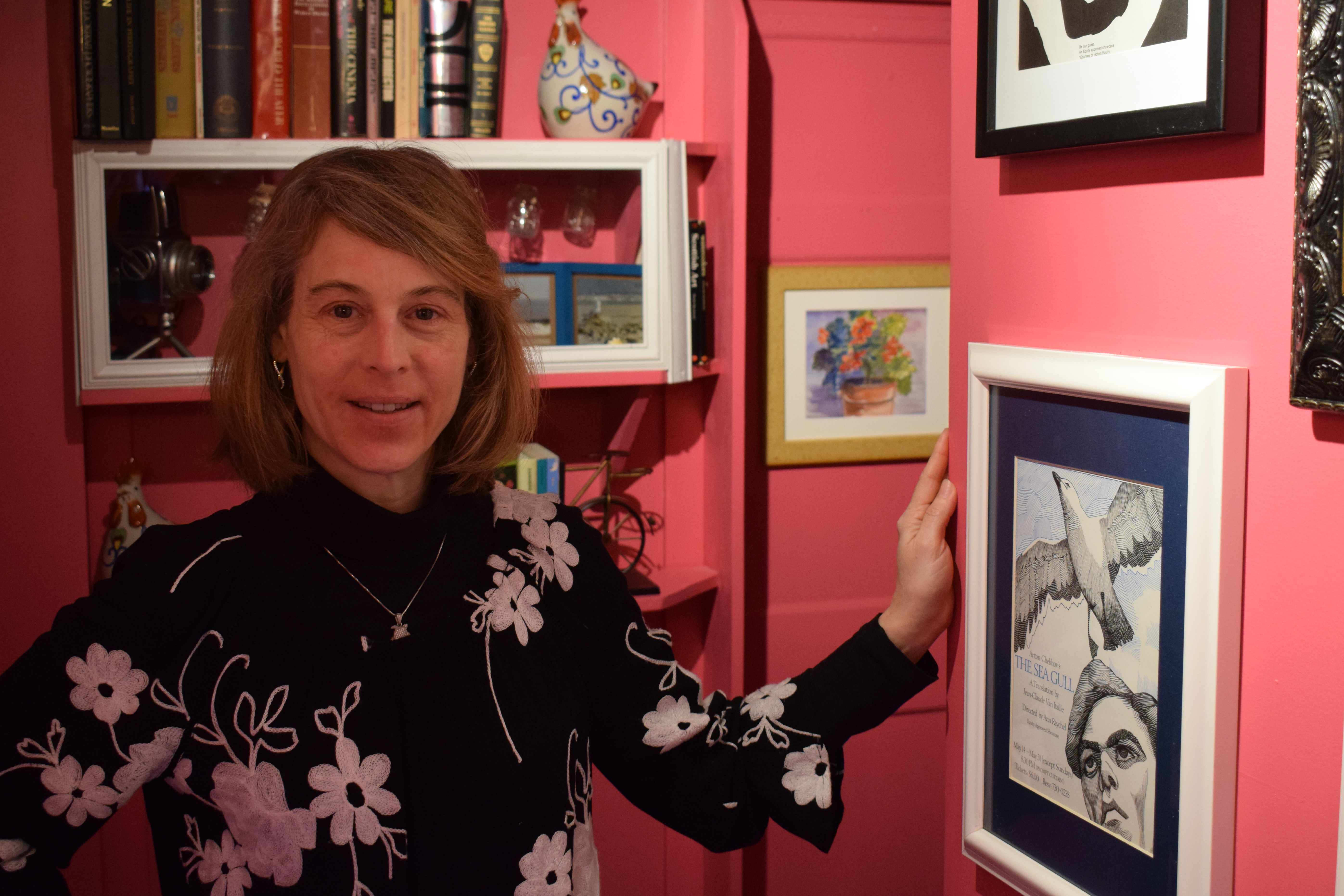 Edgecomb native Abigail White stands beside a poster designed by Ann Raychel, the namesake of White’s new venture, Ann’s Book Bistro. The bistro is at 17 Back Meadow Road in Damariscotta. (Evan Houk photo)

There’s a new bistro in town. Ann’s Book Bistro, at 17 Back Meadow Road in Damariscotta, hopes to open for takeout and curbside pickup starting at 7 a.m., Monday, Feb. 1.

The new bistro is owned and operated by Edgecomb native Abigail “Abby” White, who previously ran a theater company in Manhattan, and Chris Padil, a chef who has consulted for a handful of high-end restaurants in Manhattan.

White and Padil hope to create a community hub with Ann’s Book Bistro — offering familiar and affordable food; an array of coffee drinks, like lattes and cappuccinos; a fresh fruit and vegetable juice bar; and a collection of more than 2,000 books inherited from a good friend, Ann Raychel.

“We want to have a restaurant that supports the theater and the community at large. We really want to be involved in the community and serve the community’s needs. That’s kind of what attracted us to Damariscotta,” White said in an interview on Monday, Jan. 25.

After Raychel, a theater director and graphic designer in New York City, died a few years ago, White came into Raychel’s book collection and found a suitable use for it — sharing it with the community at Raychel’s namesake bistro.

“Books are knowledge and a chance to grow. They provide infinite possibilities to the imagination and to your knowledge source. And food has the same possibility to do that,” White said.

White said she hopes Ann’s Book Bistro will eventually become a place where people can grab a good latte, pick up a book, get something good to eat, and hang out.

For at least the first month, Ann’s will only offer takeout and curbside pickup, while a separate space is being renovated that will serve as a tapas bar with beer and wine and be able to seat 30 people, even with COVID-19 restrictions.

There will also be an outdoor patio available for seating and the owners plan to have live music at the bistro in the future.

The food at Ann’s Book Bistro will include familiar favorites for breakfast, lunch, and dinner, such as club sandwiches, homemade pasta, soups of the day, fresh fish, salads, and a burger.

However, just like the vast book collection waiting to be explored, there is a whole culinary landscape that the chef, Padil, plans to incorporate.

“A bistro is a place where you can bring in foods from all over the world,” Padil said.

“You can add curry. You can do Jamaican jerk chicken. You can do different kinds of things,” Padil said.

Some items that Padil will offer are Spanish seafood chowder, Spanish paella, and a Barcelona omelet.

“Chef Chris is very inventive with all his culinary skills,” White said.

White said the bistro will source fresh, organic, and local ingredients as much as possible. Everything will be made to order and fresh baked goods, like croissants and cinnamon rolls, along with homemade pasta, will be available every day.

The juice bar will allow patrons to customize their own fruit or vegetable juice.

White and Padil met in New York City on White’s birthday one year and have been together ever since.

“Chris was a birthday present,” White said with a laugh.

The couple began making plans to relocate to the Midcoast when they came down with COVID-19 last February, although White said she has been “half-planning” a return to her home state since she first arrived in New York City nearly 25 years ago.

“We were some of the first people to get sick,” Padil said. “I almost died.”

White said she is familiar with the high-end restaurant world, as her theater company was in the midst of Restaurant Row in Manhattan — a foodie’s mecca.

“What brought me back is the closer connection to people,” White said. “People are very straightforward and honest, and very helpful.”

Padil began his culinary journey in Barcelona, at the Michelin 3-star restaurant El Bulli. There he learned from the head chef and his mentor, Ferran Adria.

The building, yellow with a pink sign, is across Back Meadow Road from the upper Main Street branch of Bangor Savings Bank. The building was previously a flower shop and, before that, a chiropractor’s office. Padil and White, who now own the building, did extensive renovations to the interior, installing a kitchen and a full bathroom for the first time.

(Editor’s note: An earlier version of this article online and on the front page of the Jan. 28 print edition reported that Ann’s Book Bistro would open Saturday, Jan. 30. However, due to a broken water-testing machine at the Maine Health and Environmental Testing Laboratory, the opening has been delayed. Owner Abigail “Abby” White said by email on Friday, Jan. 29 that she now hopes to open the bistro Monday, Feb. 1.)