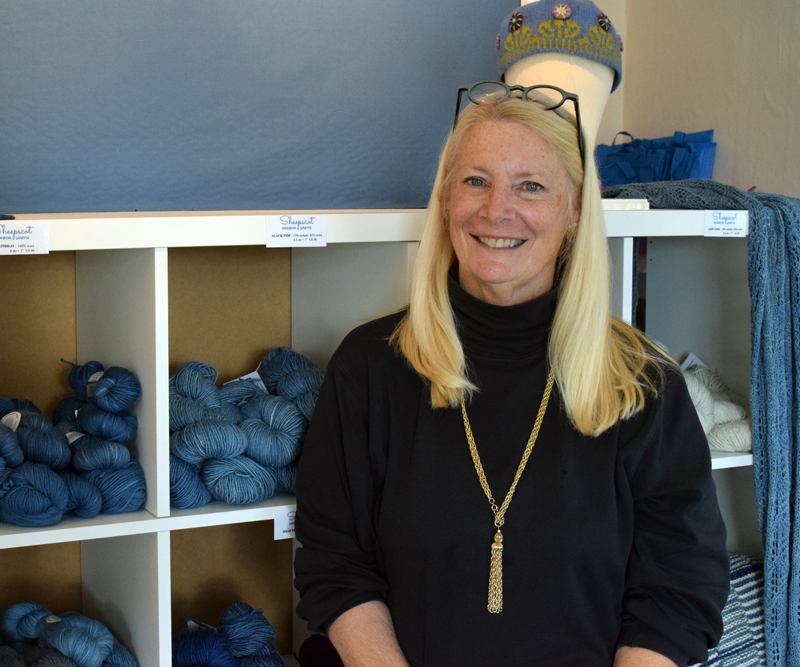 Linda Perry, owner of Sheepscot Harbor Yarns at 74 Main Street in Damariscotta, stands in front of her most popular product, four different shades of hand-dyed indigo yarn that Perry dyes herself at her home on David Island in Edgecomb. (Evan Houk photo)

A new business in downtown Damariscotta, Sheepscot Harbor Yarns, offers unique hand-dyed yarn and a variety of patterns and kits for home knitters.

Linda Perry, of Davis Island in Edgecomb, opened her store in the Pine Tree Yarns building at 74 Main St. in June after 20 years of showcasing her products at fiber and craft shows.

Perry uses a small kettle to dye one skein at a time, completing about 24 each day. She heats the water to 145 degrees, dips the yarn in, and then steams and rinses it before letting it dry.

“These I dip in a kettle, it comes out yellow and then within 10 minutes, it’s a blue that I can’t control the color, so it’s always exciting,” Perry said of her tide-colored yarn during an interview on Friday, Sept. 10.

The tidal names for the specialty yarn are inspired by where Perry lives and works on Davis Island. 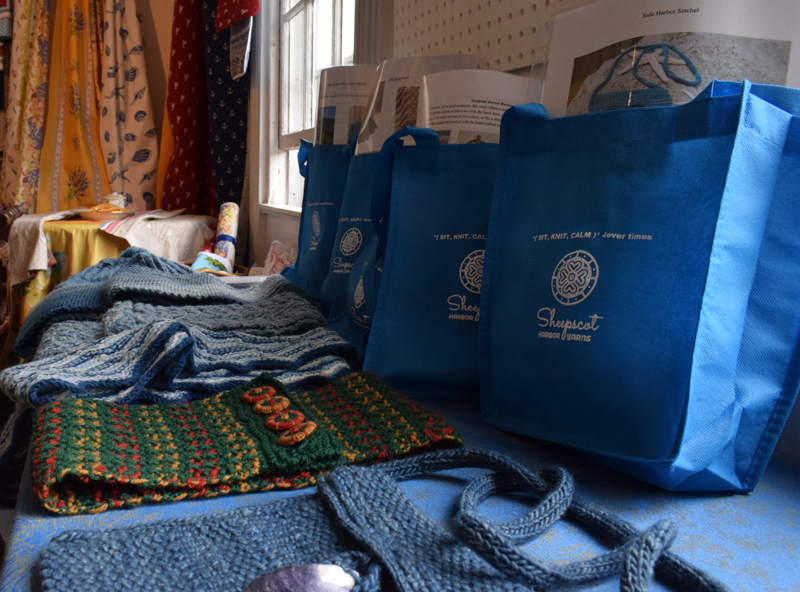 There are also several different patterns and kits for hats, scarves, neck warmers, Scottish tam-o-shanters, and the safe harbor satchel purse, which has a shell fastener.

Samples of these items, handmade by Perry, are also for sale at the store.

Perry has had her patterns featured in the Vogue Knitting and Interweave magazines.

“I try to do things that don’t look machine-made at all so people can appreciate that it’s hand-crafted,” Perry said.

Perry tried selling her wares online for a time after the onset of the COVID-19 pandemic, but said it wasn’t the same. She still manages an online store at harboryarns.com.

“I tried to have a presence online, but it’s not the same purchasing yarn when you can’t touch it. It’s a different feeling online,” Perry said.

Then in June, she realized her longtime dream of opening a storefront for her yarn and patterns. Perry said the store has been very busy since first opening and she has the greatest customers.

“It’s fun to interact with them, which you can’t do online, so it’s an extra bonus for me to chat with them and see what they’re making, and tell them a little bit about the back story,” Perry said. 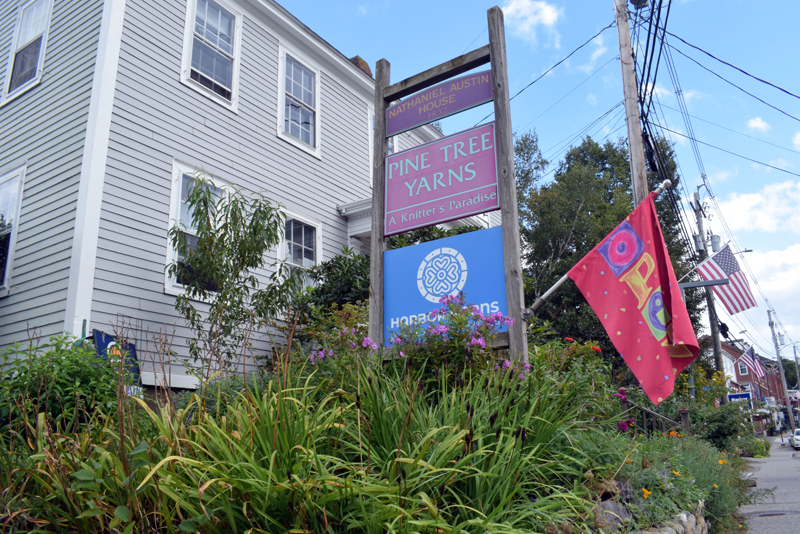 The building that houses Sheepscot Harbor Yarns at 74 Main Street in Damariscotta. Hours for the shop are Wednesday through Saturday, 11 a.m. to 4 p.m. (Evan Houk photo)

Perry has been knitting since she was young, when she would watch her mother. However, since her mother was left-handed, Perry had to teach herself how to knit. She still knits for at least four hours every day.

Perry was born in Maine, but grew up in Mystic, Conn. After her father retired to Edgecomb, she started spending summer vacations away from her teaching job.

After retiring three years ago, she moved back to Lincoln County, which she calls a “special place.”

“It’s almost a world away from the world,” Perry said.

Sheepscot Harbor Yarns is open 11 a.m. to 4 p.m. Wednesday through Saturday, at least through December. Perry will play it by ear from there, depending on business.