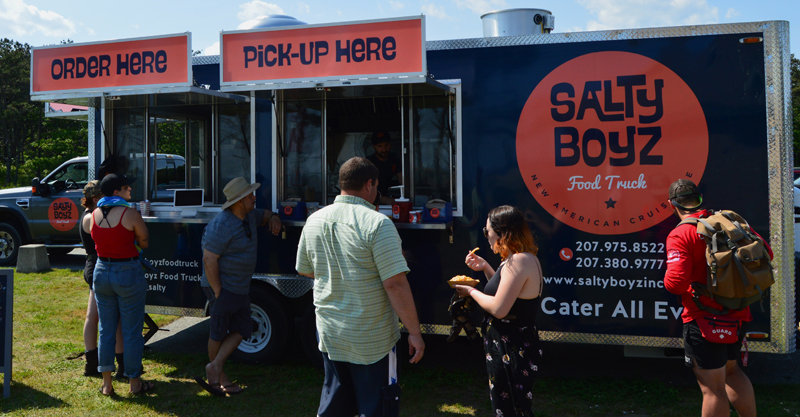 A crowd gathers in front of the Salty Boyz Food Truck at Popham Beach State Park in Phippsburg on Sunday, June 23. The truck will be open at Popham from 9 a.m. to 3 or 4 p.m. every day until Labor Day. (Evan Houk photo)

Salty Boyz Food Truck, the new rolling restaurant from the owner of The Contented Sole and the SS Minnow snack shack at Pemaquid Beach, officially opened for business at Popham Beach State Park on Saturday, June 22.

Warren Busteed, co-owner of The Contented Sole, and Florin Ungureanu,  head chef, have worked together for over 10 years and have now partnered up to bring their unique style of “American cruise-ine” to visitors at Popham Beach.

Salty Boyz will be open for business every day from 9 a.m. to either 3 or 4 p.m., depending on customer traffic. The food truck will be parked on the far corner of the parking lot, next to the picnic area.

The truck will feature the Boyz Burger, a mouth-watering and high-end take on the Big Mac; Asian street fries; and tacos similar to those on The Contented Sole’s menu, among several other items.

Busteed and Ungureanu plan to use all the freshest, locally sourced ingredients and local grass-fed beef for their dishes.

Busteed said the food truck will be at Popham Beach at least until Labor Day, but will be available for catering events, like rehearsal dinners and weddings, in the offseason.

“If you get the food truck (for catering) and you have somebody on a budget, we can plan a menu that basically fits almost any budget,” Busteed said. 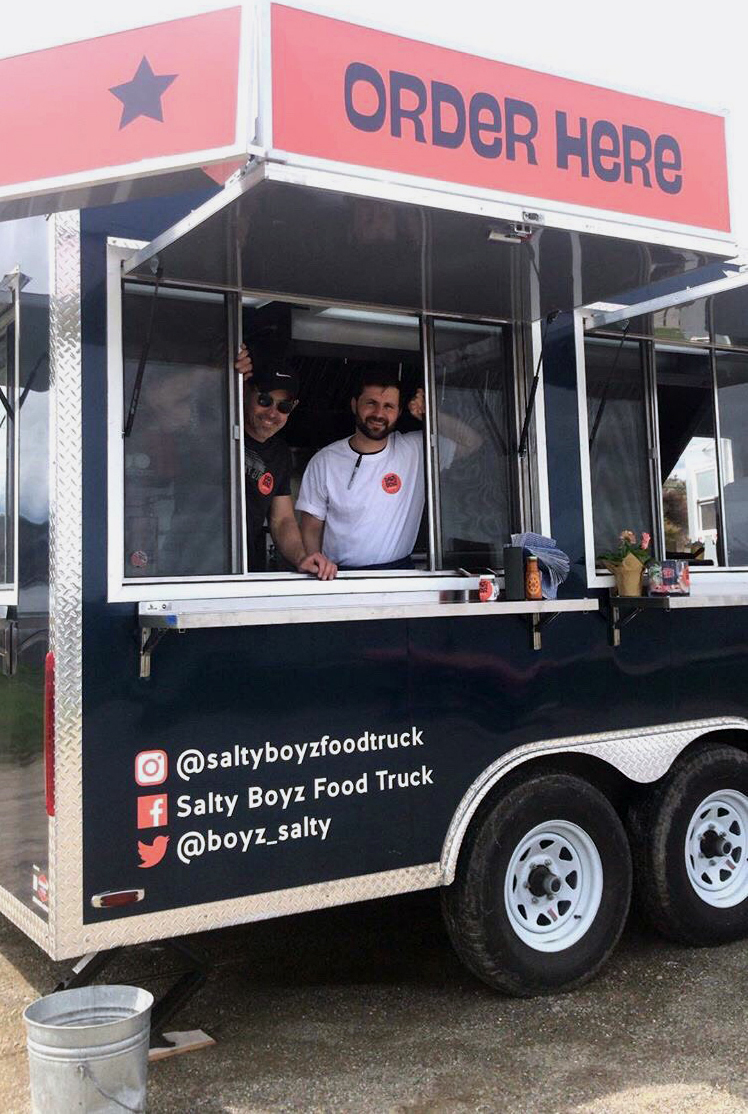 “We were throwing around the food truck idea for a long time. We’ve done a lot of (research and development) and travel throughout the state and seen various food trucks. So we spent a lot of time researching it, to try to figure out what our niche was going to be and what market we would go after. I have been working with the state of Maine for 15 years, so I’ve got some good connections in the state,” Busteed said.

The Contented Sole is also on state property, at the Colonial Pemaquid State Historic Site.

Busteed said that when he heard about a potential opportunity at Popham, he decided to design his own truck from the ground up and submit his proposal for approval.

The truck was built in Florida using a floor plan and graphics customized by Busteed and Ungureanu. They picked it up in March. The build took six months.

Busteed said the kitchen has “every piece of cooking equipment,” including fryers, a six-burner range, a flattop grill, and all the refrigeration necessary to operate a mid-sized commercial kitchen.

Busteed said he thinks their environmentally conscious approach helped them win the contract for Popham.

Both Busteed and Ungureanu have been working in the restaurant business for most of their careers.

Busteed ran a restaurant and ski resort in Vermont after working in various kitchens, including one in the Caribbean. He then purchased The Bradley Inn, at Pemaquid Point, with his wife, Beth Polhemus, and the couple owned and operated the restaurant and inn for 20 years.

Busteed and Ungureanu agreed that Polhemus has played a crucial role in each business venture, especially dealing with the business and visual aspects of the restaurants, citing her accounting background.

“I like to think that myself, Warren, and Beth kind of have the same vision towards food and service and towards the under-sell and over-deliver message,” said Ungureanu.

Ungureanu started work as a dishwasher at The Contented Sole in 2008, when he first moved to the United States from Romania, and eventually worked his way up to chef at the restaurant.

Ungureanu grew up on a farm in Romania and received a law degree there before realizing that career path was not for him.

“I don’t think I could be locked in an office for a really long period of time. I don’t think my personality is such. Some people do it and I respect that. But I have to keep moving,” Ungureanu said.

Ungureanu also worked as a chef for Busteed at The Bradley Inn. During the offseasons, he would travel and he worked in Chicago for a period of time at a few highly acclaimed restaurants, like the three-Michelin-star-rated Alinea and local favorite The Dawson.

Ungureanu credits his time in Chicago, but especially the guidance of Busteed, for helping him to learn the ins and outs of the restaurant industry and kitchens and become the experienced chef he is today.

“After the first summer when I started cooking in fine dining at The Bradley Inn, I really fell in love with it and I really wanted to pursue it. That’s why I ended up working for some of the best restaurants in the country. And I learned a lot from those people. I learned what to do, what not to do, and what this industry’s about,” Ungureanu said.