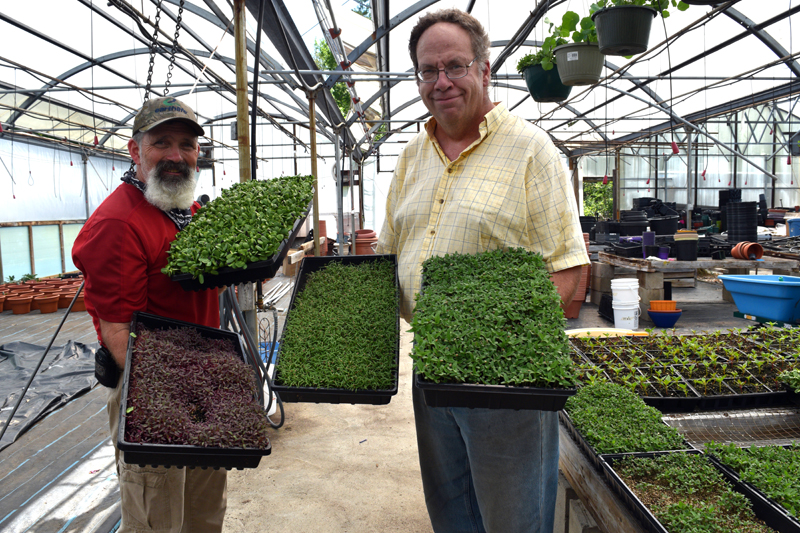 Midcoast Micros founders Buzz Pinkham (left) and Jim Peterson display some of the microgreens they grow and deliver from a home base at Pinkham’s Plantation in Damariscotta. (Hailey Bryant photo)

Two veterans of the gardening business in Lincoln County have formed a new partnership to grow and deliver microgreens, touted for both culinary and nutritional benefits.

Jim Peterson and Buzz Pinkham officially launched Midcoast Micros on May 21. The business is operating out of a 7,000-square-foot greenhouse at Pinkham’s Plantation in Damariscotta.

Microgreens are young vegetable greens between about 1 and 3 weeks old. According to a study by the University of Maryland’s College of Agriculture and Natural Resources, microgreens can have four to 40 times more vitamins, minerals, and antioxidants than mature plants.

Peterson, 58, has lived in Dresden for 22 years and has owned a series of gardening businesses, including Sunshine Growers of Maine, in Dresden, and Garden of Eden, in Richmond.

“Both went by the wayside in the Great Recession,” Peterson said. He went into sales and is now the regional sales representative for Northeast Greenhouse and Nursery Supply, a retailer based in Peabody, Mass.

Now, in another time of economic uncertainty, Peterson is inspired, not discouraged.

“I would call it COVID-inspired,” Peterson said. “I was talking with Buzz and he encouraged me, now that I have time on my hands, to work on it.”

“I’m just an enabler,” Pinkham said. He said Peterson approached him with the idea and he offered up his greenhouse. Pinkham’s Plantation has sold gardening and landscaping supplies since 1978.

The other member of the three-person Midcoast Micros team is Tyler Dillinger, 26, who moved to Maine a few years ago from Charleston, S.C., according to Peterson. Dillinger holds a business degree from The Citadel in Charleston, and handles the business’s website and other marketing materials. 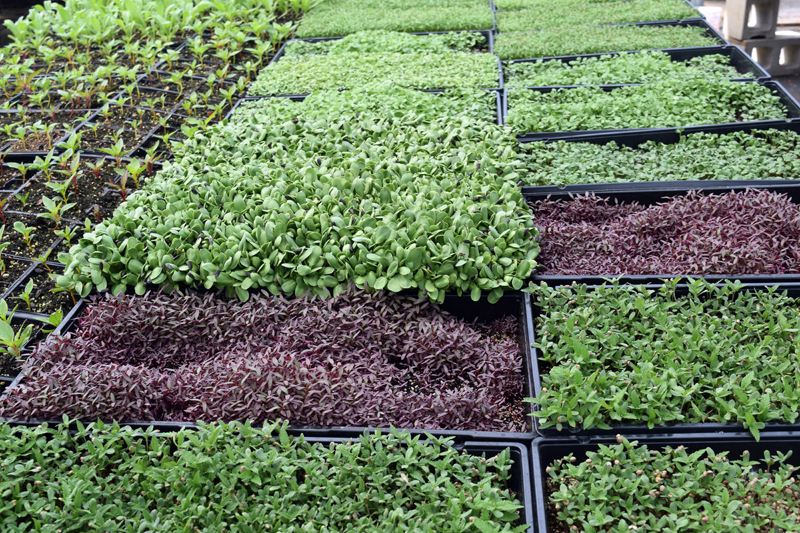 Some of the microgreens Midcoast Micros has available include sunflower, amaranth, Chinese mahogany, and hemp. (Hailey Bryant photo)

The idea for Midcoast Micros has been in the works for about 2 1/2 months. Peterson originally had the idea to grow baby hemp after reading a Cornell University study on the plant’s nutrient density.

He knew it would be a lower-investment startup than his previous businesses because the seeds are inexpensive and grow quickly. They also don’t require fertilizer.

The types of greens available will vary, and Peterson is experimenting with different mixes to sell as bundles. Peas, sunflowers, and hemp, which has a hazelnut flavor when harvested as a sprout, will be permanent fixtures.

According to Pinkham, microgreens can add a variety of colors, flavors, and nutrients to a dish.

Customers can sign up to have microgreens delivered to their doorstep once a month, twice a month, or weekly. Delivery can be contact-free.

Customers can also pick up orders at Pinkham’s Plantation, 431 Biscay Road, Damariscotta, and Peterson is looking for retailers to carry the products. Free samples are available at Pinkham’s.