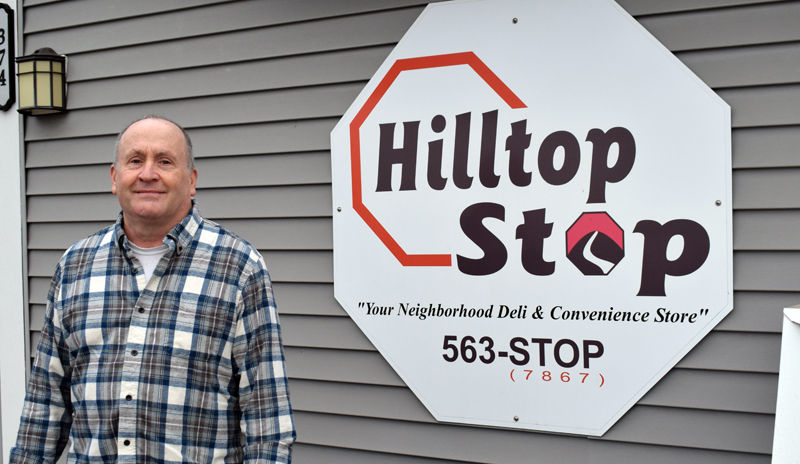 Greg Snyder is the new owner of Hilltop Stop in Damariscotta. Snyder plans to keep everything the same, saying the store has “integrity.” (Evan Houk photo)

Greg Snyder, of Sidney, is the new owner of Hilltop Stop in Damariscotta, and he plans to keep everything about the popular gas station, convenience store, and hot food bar the same.

The previous owners, Gary and Jane Gravel, said selling the store is the first step in their long-term plan to semi-retire and eventually spend more time at their home in Florida.

Gary Gravel, who has run the store since he and his wife opened it as Hilltop Stop in 2011, said on Monday, Jan. 11, the same day the store changed ownership, that he will stay on for at least a week to aid in the transition.

A trusted employee, Ashlee McGhee, will take over as manager of the store and the new owner, Snyder, said he doesn’t plan to change anything about Hilltop Stop.

Snyder will keep all the employees and maintain the popular menu, he said by phone on Monday. Hilltop Stop offers pizza, sandwiches, fresh-ground hamburgers, chicken fingers, and other fare for breakfast, lunch, and dinner.

Snyder said he really likes the food and thinks Hilltop Stop is an extremely clean and well-run store.

Snyder has owned and operated the Twins Country Store in Augusta for 11 years and the Hilltop Superette in Portland for two years. He said he is excited to own a business in Damariscotta, noting that he enjoys the area and plans to become involved in the community, similar to the previous owners.

“I’m very proud and happy to be a part of the Damariscotta community and I look forward to supporting the staff and community. Hopefully we can live up to the standard set by Gary and Jane,” Snyder said.

He said his son takes guitar lessons with local musician Steve Jones, lead guitarist with the Boneheads, and he has enjoyed watching the band play at Schooner Landing in the past.

Snyder said Damariscotta reminds him of his hometown, Sidney, in that it is a place where “you get rewarded for being community-minded.”

“People in the area are very genuine and friendly. It makes you feel good to live in this part of the country,” Snyder said.

Snyder said that after he met with the Gravels about buying the store, he felt it was the right move to make.

“I really like them and felt comfortable. I felt the store had a lot of integrity,” Snyder said.

Jane Gravel said she and her husband were planning to sell Hilltop Stop, but didn’t expect it to happen so soon — until they met the right buyer in Snyder.

Gary Gravel said he will transition into helping at the couple’s nearby grocery store, Main Street Grocery, and he will take over maintenance for some rental properties the Gravels own. “I’ll always work,” he said.

“It’s bittersweet,” he said of the sale, noting that he will miss some of the work at Hilltop Stop after running it since December 2011.

Main Street Grocery recently received a designation as a state liquor agency and is now selling spirits, Jane Gravel said. She said the store plans to offer more home-cooked meals in the deli and will continue to provide curbside pickup every day and grocery delivery Monday-Friday.