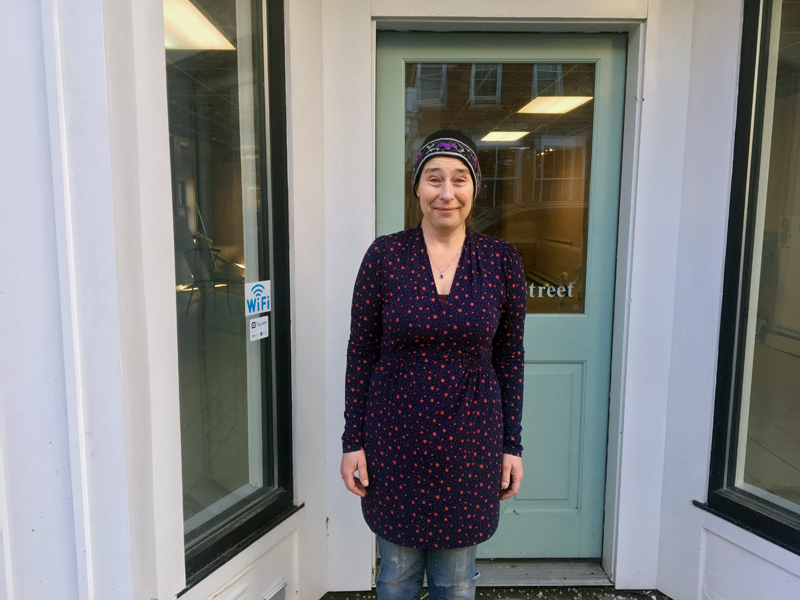 Susan Murphy stands in front of her new property, the Gilbert E. Gay building on Main Street in Damariscotta. Her coffee shop, Cupacity, will open in the spring. (Suzi Thayer photo)

The Gilbert E. Gay building in downtown Damariscotta has a new owner who plans to open a coffee shop, Cupacity, in the first-floor space formerly home to Buzz Maine.

Susan Murphy recently bought the 133 Main St. property from Dan and Eileen Miller, who had owned it since 2013. Murphy is renovating the first-floor space. Buzz Maine, a cafe and coworking space, closed last summer.

Murphy and her husband, Ted Pine, moved to Tenants Harbor from Norwich, Vt. about 10 years ago, then bought a home in Newcastle.

“We loved living in Tenants Harbor, but we began to feel kind of isolated,” Murphy said. “I’ve always loved this community and we were interested in the Damariscotta Montessori School for our 8-year-old twin daughters.” The twins now attend the Montessori school. The family also includes two daughters from previous marriages.

Murphy, who holds a graduate degree in marriage and family therapy, said she decided to open a coffee shop because she’s a natural-born social worker. “I’m very social and love community, and I’ve always loved good coffee,” she said. “This is going to be a place for people to drink really good coffee and hang out. People talk to each other here. People of all different ages and occupations just seem to mix in this community.”

The coffee shop will roast and grind beans from Bard Coffee in Portland for its coffee drinks, and Murphy plans to attend a Bard barista school in Topsham. “When you use their products, they teach you how to best use them,” she said. “They’ve been wonderful. They’ve come here to see my space.”

The coffee drinks at Cupacity will include the requisite lattes and cappuccinos, as well as nitro brews – cold-brewed coffee processed in a keg, much like beer, and infused with nitrogen. Murphy said nitro brews are extra-smooth and look a little like a Guinness. “It loses its bitterness in the process and it has a creamy head,” she said.

Some light fare, mainly soups and bread, will be available too. “There are enough good places to get a sandwich in town,” Murphy said. “I don’t want to do anything anyone else is doing, but I think people will want a little something to go with their coffee, so I’m thinking some good bread and something like avocado toast.”

She’ll also offer bagels from Hootenanny Bread next door. “I love their bagels,” she said.

Murphy said the coffee shop will serve fresh lemonade and cold seltzers that can be combined with a choice of flavored syrups. The organic Royal Rose Syrups are made at Split Rock Distilling in Newcastle. “They’re a local company and they make some very interesting flavors,” she said.

The coffee shop will have an open kitchen with a counter separating it from the dining area, which will be furnished with an interesting array of tables and chairs, and at least one couch.

Murphy said she spent time shopping at yard sales and antique shops along the coast of Maine last summer. “I don’t like everything to match perfectly,” she said. “And that includes cups and plates. It will be a mix-match for sure.”

Murphy’s friend Samantha Merrill, a former manager of both Buzz Maine and the cafe at Sherman’s Maine Coast Book Shop, which closed last August, will work alongside her in the new coffee shop. “She’s had a lot of experience and she’s really terrific with people,” Murphy said. “She’s going to teach me a lot.”

June Alley, which runs along one side of the building, is part of the property, and Murphy plans to eventually add outdoor seating with small cafe tables.