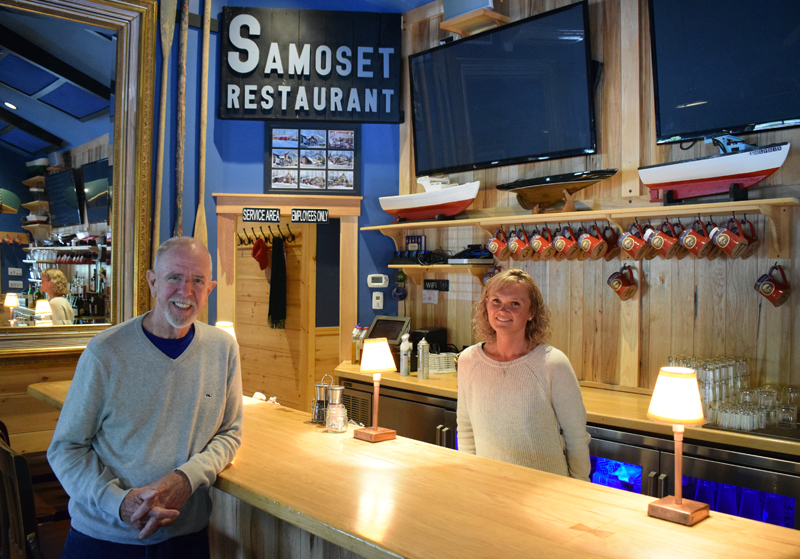 From left: Cary Myles, the new owner of The Harbor Room, and Cortney Geyer, the new manager, stand by the bar of the New Harbor restaurant Monday, June 1. Myles and Geyer expect to reopen the restaurant in late June or early July. (Evan Houk photo)

Cary Myles, a longtime seasonal customer of the Samoset Restaurant and then The Harbor Room in New Harbor, has taken over the business and plans to reopen in late June, with few changes.

“I’m of the adage that ‘if it ain’t broke, don’t fix it,’” Myles said in an interview at the restaurant Monday, June 1.

The Harbor Room will be open for curbside takeout and table service inside the restaurant and outdoors on the spacious wooden deck. The New Harbor fixture closed in mid-March due to the coronavirus emergency.

The former owner, Cerina Leeman, said Myles took over the lease from her. She wished him the best of luck.

“It’s a great community and it deserves a great year-round hub for everyone to gather. I look forward to the opportunity to support them when they open,” Leeman said in an email Tuesday.

Myles is optimistically aiming for a June 15 opening date. More realistically, he expects The Harbor Room to be ready for opening closer to the end of June or later.

Cortney Geyer, who has worked as a server at The Harbor Room for the past three years, will manage the restaurant.

Geyer, a lifelong resident of New Harbor, has years of experience in the hospitality industry, and has also worked in schools and in the medical field.

“I always come back to this because I love meeting new people. I’m very personable. I like being able to talk to my customers. I’ve met a lot of people and it’s just something I enjoy,” Geyer said Monday.

Geyer knew Myles from waiting on him during her time at The Harbor Room and was immediately interested when he approached her with the opportunity to run the year-round restaurant.

“When Cary called me, I was so excited. This is pretty exciting stuff for me,” Geyer said.

“Cortney is so knowledgeable and quick as a whip, and extremely helpful. It was essential that she be part of the deal if she was willing,” Myles said.

Geyer said The Harbor Room will have about 20 employees. She is working to bring back as much of the former staff as possible.

Myles said he plans to keep the menu essentially the same, with some minor tweaks. He and Geyer are open to suggestions from customers and staff and will “be adding along the way,” he said.

Myles will also gain input on the menu from the restaurant’s new chef, once hired. Myles and Geyer are in the process of interviewing chefs. 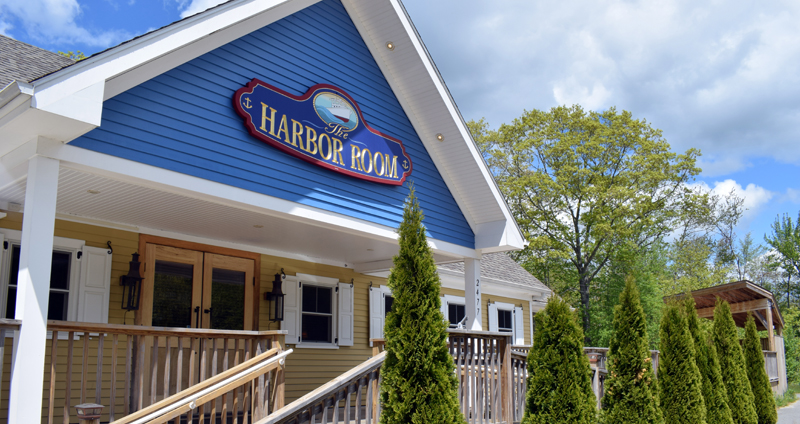 The duo plans to keep the seafaring interior decor essentially the same – it includes vintage skiffs, one from The Carpenter’s Boat Shop in Pemaquid, and maritime-themed photos and paintings by local artists.

“People really love the decor. That’s one of the things that keeps bringing people in,” Geyer said.

“I was bored, to be perfectly honest. I was looking for an opportunity,” Myles said.

Myles has been visiting New Harbor since the 1970s and said he has been eating at the Samoset Restaurant, and then The Harbor Room, since it first opened.

The 44-year-old Samoset Restaurant building, a former laundromat, was demolished in February 2014 to make way for construction of what is now The Harbor Room. The building was constructed and is owned by real estate developer and restaurateur Xavier Cervera.

In 2015, Myles bought a waterfront property on Pemaquid Trail that he shares with his partner, Cindy Belkov.

Myles is now living in New Harbor full-time in order to oversee his new venture.

Myles and Geyer both said they will comply with whatever coronavirus-related public health regulations are in place at the time of opening.

In order to provide dine-in service under Gov. Janet Mills’ current multiple-stage reopening plan, Lincoln County restaurants must maintain a 6-foot distance between tables, have servers wear masks, and observe increased sanitation and physical distancing whenever possible, among other stipulations and recommendations.

“It would be nice if things had evolved to the point where maybe there’d be relaxation of some of the rules. But whatever it is, we’re compliant,” Myles said.

ServPro Restoration Services was on-site Monday to deep-clean and sanitize the entire restaurant.

Myles and Geyer said they plan to have live music outside on the deck this summer. They may book a band for The Harbor Room’s opening weekend.

Geyer said that with new picnic tables that have been ordered, 60 people will be able to fit on the deck with tables spaced 6 feet apart.

The Harbor Room will honor all gift cards purchased under the former ownership.

“I’m looking forward to creating a team atmosphere that’s fun and a perfect place to bring your family and have a nice dinner. If that happens, I’ll consider this a true success,” Myles said.