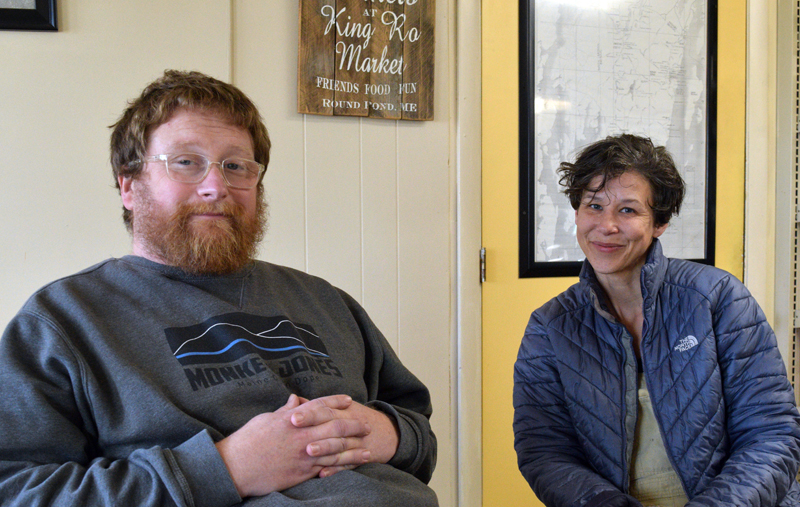 Owen and Amity Libby, new owners of the King Ro Market, sit in the dining space of the Round Pond general store on Wednesday, Nov. 23. The couple is still offering Friday night dinners and hopes to begin hosting them in the dining space again soon. (Evan Houk photo)

The new owners of King Ro Market, Owen and Amity Libby, look to honor the beloved Round Pond general store’s storied history while at the same time evolving into the future.

“Primarily, we’re going to focus on keeping it functioning and keeping it the same so people are comfortable with it,” Owen Libby said during an interview at the store on Wednesday, Nov. 23.

The couple has been living above the store, “learning the ropes” and trying to absorb the 50 years of experience from previous owners B.J. Russell and Lori Crook. The Libbys will officially take ownership in January, Owen Libby said.

King Ro Market has been a fixture, a one-stop shop, and a community gathering place in Round Pond since its purchase and reopening in 1971 by Russell’s parents, Bill and Fran Russell.

The store had been closed for a few years after the death of the previous owner, Artel Bryant, in 1968. According to B.J. Russell, this was the only extended closure since it was built by Alexander Yates in 1874.

Owen Libby said he is continuing the same basic set-up that the market has traditionally had with groceries, “odds and ends,” baked goods, sandwiches, and pizza made to order.

“This place has been around since the 1800s. It’s got a long proven track record and is an important piece of the community,” Owen Libby said.

He said he is very grateful to Russell and Crook for the opportunity.

In an interview with The Lincoln County News in 2019 after they put the business up for sale, Russell and Crook said they hoped the new owners would continue with King Ro’s historically consistent hours of 7 a.m. to 7 p.m., seven days a week, 365 days a year. The Libbys said they intend to do just that.

“It works well because people know they can count on us for what they need,” Owen Libby said.

He said he hopes to reopen the dining room to have the Friday night dinners inside the King Ro Market again, which was always the case before the COVID-19 pandemic hit in March 2020.

“It’s nice in the winter for people to be able to get out and do something locally,” Owen Libby said. 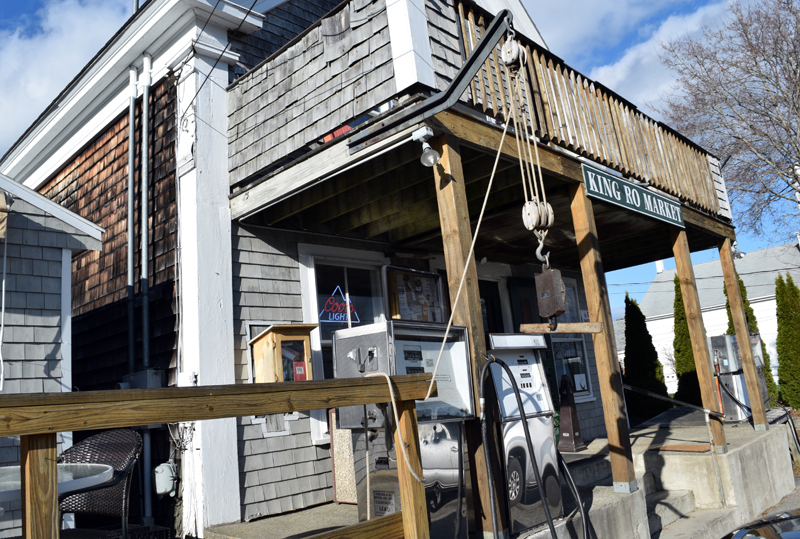 The exterior of the King Ro Market in Round Pond with the hanging deer scale on Wednesday, Nov. 23. The new owners, Owen and Amity Libby, are looking to honor tradition at the market and are continuing to offer deer-tagging services. (Evan Houk photo)

One other change on the horizon involves the planned installation of a small bar and a couple taps.

“Just to have something so that if people want to come in to have a beer after work or while they’re waiting for their pizza, we’ll have that option for them,” Owen Libby said.

Libby is a Damariscotta native and said he is excited to return to Lincoln County after living and working as a physical education teacher in the RSU 56 school district in Dixfield for 15 years.

He said his family used to visit Round Pond to sail and would climb up the hill from the harbor to King Ro Market for fuel, snacks, and Orangina.

When he heard about the opportunity to purchase King Ro Market from Crook, who happens to be the mother of his best friend, it seemed like a good fit, he said.

“There was kind of a connection there,” Owen Libby said.

Libby also coached sports and did a number of different jobs during the summer, including catering events making pizza and barbecue. He also managed a fish market in Portland for a time.

“I’ve done a number of things over the years,” Owen Libby said.

His most recent job was as a sales representative for the Farmington-based cannabis extraction company, Blue Sky Lab LLC, which afforded him the opportunity to travel across the state interacting with people.

Owen Libby says that dealing with people, having positive interactions, and meeting their needs has been a constant throughout his life and he looks to continue that by serving the community through King Ro Market.

“I just like interacting with people and providing service for them,” he said.

Amity Libby, who grew up in the small Maine town of Talmadge, said she is also excited about the community engagement aspect and has been managing King Ro’s social media pages.

The couple loves the area and the schools, they said.

“I remember thinking ‘God, Round Pond is so beautiful. Like really fortunate people get to live there,” Amity Libby said.

She said the store reminds her of the general store they had in Talmadge and she has been enjoying the new venture.

“It’s a slower pace. People know each other and take care of each other,” Amity Libby said.

King Ro Market, at 1414 State Route 32 in Round Pond, will continue to be open 365 days a year from 7 a.m. to 7 p.m. For more information, find King Ro Market on Instagram and Facebook.