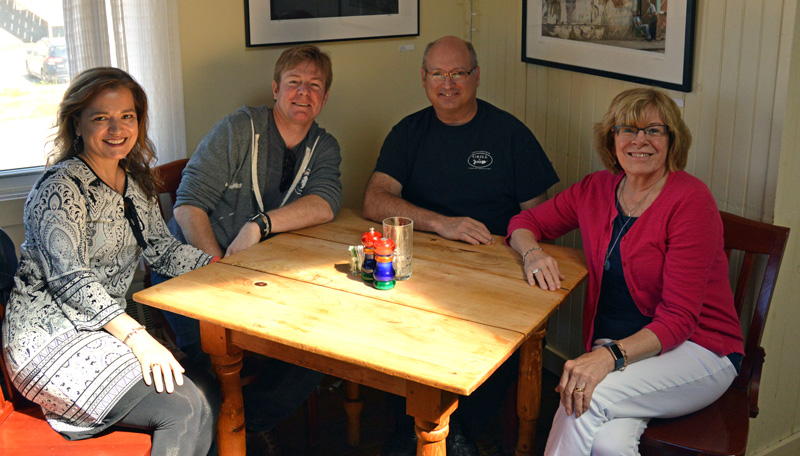 From left: The new owners of the Damariscotta River Grill, Tamara Dica and Tim Beal, sit with the Grill’s founders, Rick Hirsch and Jean Kerrigan, at a corner table of the restaurant. Beal and Dica say nothing will change at the Grill, which will reopen for business as usual Thursday, June 13. (Evan Houk photo)

The Damariscotta River Grill has officially changed hands, but new owners Tim Beal and Tamara Dica say nothing will change and patrons can expect the same restaurant and the same “grown-up comfort food” they have come to know so well.

The downtown landmark has been owned by husband-and-wife team Rick Hirsch, who is executive chef, and Jean Kerrigan, who is the general manager, since opening in October 2003. Now they are ready to pass the torch to an enthusiastic and experienced new couple in Beal and Dica.

The River Grill closed Tuesday and Wednesday, June 11 and 12, to prepare for the official transfer of the property to its new owners. According to Beal, the restaurant will reopen for business as usual Thursday, June 13.

“Thursday it opens up, the menu’s the same, people the same, even Rick and Jean are going to be here,” Beal said.

Hirsch and Kerrigan “created a brand,” Dica said. “It’s a very well-established restaurant with a lot of legacy and why would we want to change that when it is so wonderful right now?”

Hirsch said he and Kerrigan will stay involved for the short term, as long as the new owners need their assistance.

“Through the summer, we’ve agreed to participate in the catering jobs that have been booked. We’re going to help them facilitate those,” Hirsch said.

In addition to the 8,000-square-foot building at 151-155 Main St. and the River Grill business, the purchase includes the Prep Kitchen storefront beneath the restaurant and Hirsch and Kerrigan’s long-running catering business, Red Plate Catering and Events.

The Prep Kitchen features an impressive selection of wine and beer; pre-made frozen meals, such as chicken pot pie and Italian stew; and Hootenanny Bread. Most importantly, it serves as the actual prep kitchen for all the dishes served at the River Grill.

Beal said he and Dica love the concept of the River Grill.

“It’s got all of these wonderful, crave-able dishes, things that people are in love with, but then there’s a whole avenue for doing specials and it’s such a broad-ranging menu too,” Beal said.

Hirsch and Kerrigan feel like they have found the perfect buyers in Beal and Dica to carry on the legacy of the River Grill that they have carefully crafted over the past 15-plus years.

The new owners “want to continue what we’ve started and then push it in a direction they’d want to see it go, but not come in and tear it apart and do something completely different. That feels so great to us, that what we’ve created here is going to continue on in a similar fashion,” Hirsch said.

Hirsch then spoke to the original inspiration behind the River Grill.

“We wanted a lot of comfort food, a little bit upscale, but not white tablecloth,” he said. “We wanted it to be for families, for friends.”

“One of the big things we talked about this being was a community place, a place the community can come and know they’re going to see people they know and spend time in the bar at happy hour and kind of a gathering place for people in the community,” Hirsch said.

Hirsch went on to talk about the concept of grown-up comfort food that he and Kerrigan developed over their years in the restaurant business. This includes menu items such as lobster cakes, seafood fettuccine, and seafood stew.

Beal was born and raised in Chicago, but his family often vacationed in Midcoast Maine, so he is familiar with the area, especially Damariscotta, where he always made sure to visit Renys anytime he was in town.

Beal found out that Hirsch was working in the kitchen of the former Backstreet Landing in Damariscotta when Beal was a child vacationing in Maine with his family.

Beal said this revelation added to the incredibly good feeling about buying the restaurant that the couple has experienced ever since they initially walked through the River Grill’s doors in March to look at the property.

Beal said he has worked in the restaurant industry since 1993, when he got his first job as a bartender in London. He then worked in Chicago as a line cook, bartender, busboy, and everything in between, gaining experience all the while.

“When I was 18 and I wanted to own a restaurant, my dad said, ‘OK, why don’t you work for somebody first and figure out how to do it?’ … Then my career just sort of took off in that avenue,” Beal said.

Dica originally came to the U.S. from Romania through a work exchange program offered by McDonald’s, where she began working when the chain first expanded to Romania in 1995.

Dica has been working in the restaurant business ever since. She worked as a general manager for three years at McDonald’s in the U.S. before moving on to a position with Panera Bread in Maine.

Beal and Dica first met while working at Panera Bread. Over his 13 years at Panera Bread, Beal worked his way up from the bottom to become district manager for all the stores in Maine.

Dica worked there for about 15 years, first as a general manager, then for her last five years as the district manager, taking Beal’s place.

Beal had moved on to work for Landy’s, a restaurant group in Kittery, where the couple lived before recently moving to Newcastle.

“I was operations director for a restaurant group in Kittery. … We had a full-service restaurant and a sort of a fast-casual clam type of place, we had a scratch bakery. And I was a partner in that, and I worked with the principal owner running those, developing those,” Beal said.

After years of 70-hour workweeks and a bevy of hard-won experience, Beal and Dica decided they needed to own their own restaurant.

“We’ve been working very hard for a long time, and you’re always on call when you have responsibilities, and you have a day off but you’re still answering your phone … because you are responsible for a lot of people. …We are so involved in these jobs that we have, we are putting in 100%, 150%, why not do it for ourselves? And we finally took the leap,” Dica said.