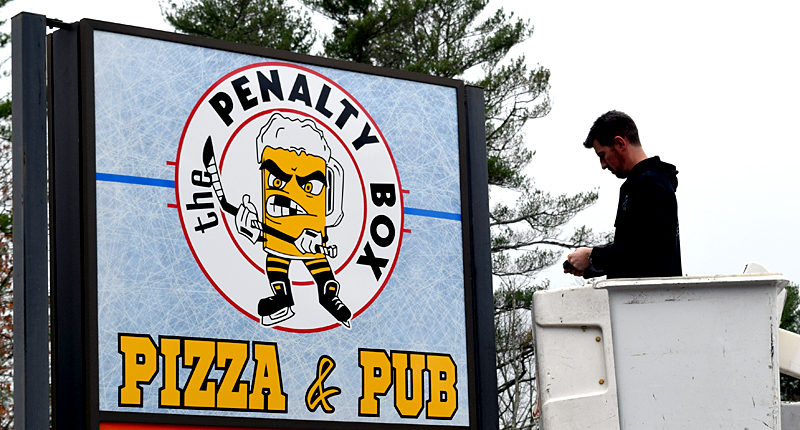 Dave Morgan, of The Sign Store & Flag Center in Auburn, works on the sign for The Penalty Box Pizza & Pub the morning of Tuesday, Nov. 15. The new restaurant in the 436 Main St. space formerly home to Romeo’s Pizza will open at 5 p.m., Thursday, Nov. 17. (J.W. Oliver photo)

Local business owners Gary and Jane Gravel have purchased Romeo’s Pizza and All-Stars Sports Pub in Damariscotta. After a brief closure to make some changes, the business will reopen as The Penalty Box Pizza & Pub at 5 p.m., Thursday, Nov. 17.

The Gravels plan to remake the business as “a true sports pub” with more TVs in the dining room and sports on all TVs at all times.

Customers will be able to watch football and NASCAR all day Sunday, as well as the Bruins, Celtics, and Red Sox whenever they play.

“That’s a sports pub to me: where you offer whatever is on at the time,” Gary Gravel said.

The Gravels are also considering having UFC parties when there’s a big pay-per-view fight, and exploring the idea of small TVs at each booth or table where customers can watch whatever they want.

“I want people to want to come here – to make it a destination where people can relax and enjoy themselves and watch some sports and have a good time,” Gary Gravel said.

The Gravels also plan changes to the menu, including to the pizza recipe. The Penalty Box will offer pan and thin-crust pizzas, as well as a gluten-free crust.

“Our goal is to give good portions of a good product at a reasonable price,” Gary Gravel said.

The Gravels bought the business from Nicholas Panagos, officially taking ownership at 4 p.m., Thursday, Nov. 10. They kept the pizzeria and pub open through the weekend, but closed Monday, Nov. 14 to begin work on the transition.

Among the changes to come, the pub will have a cold tap system to keep the beer cold from the keg to the glass. The number of beers on tap will grow, and will include craft beers and local brews. The pub will have happy-hour specials Monday-Thursday.

Outside, the signs will change to feature The Penalty Box logo, a hockey-playing beer mug with a mean scowl and a few missing teeth. The Gravels also plan to improve the lighting in the parking lot.

The Penalty Box kitchen will get new equipment, including new cold stations and a new hood system. In the dining room, the new owners plan to reupholster the booths and make other cosmetic improvements.

While the Gravels plan to make many changes during the closure, the restaurant will remain a work in progress for a while, they said.

The Gravels, of Jefferson, own Supplies Unlimited and Oliver’s Print Shop in Damariscotta and are the former owners of several other local businesses.

Gary Gravel will continue to manage Hilltop Stop, but will reduce his hours. He will open the store every weekday and work until 11 a.m., then report for duty at The Penalty Box.

Jane Gravel will be the general manager at The Penalty Box. “We’re going to run this together, but Jane is going to be in charge,” Gary Gravel said.

The couple had talked about owning a restaurant or a sports pub for about 10 years.

“We like the challenge,” Gary Gravel said of their decision to open another business. “We like buying businesses or buying properties and developing them and working hard and seeing them mature and prosper and do well.”

Gary Gravel has experience in the restaurant industry, including as a manager of Margaritas locations in Lewiston and Branford, Conn., as well as the restaurant and bar at what is now the Fireside Inn in Auburn.

The Gravels plan to bring some of their crew along for their new venture. Jane Gravel’s mother, Marcia Mortimer, a fixture in the kitchen at Hilltop Stop, will be in charge of morning prep at The Penalty Box.

The business has 13 employees, mostly part-time. The Gravels are accepting applications. Pay is up to $15 an hour. “We want good people,” Gary Gravel said. They also offer paid vacation, a meal plan, and free uniforms.