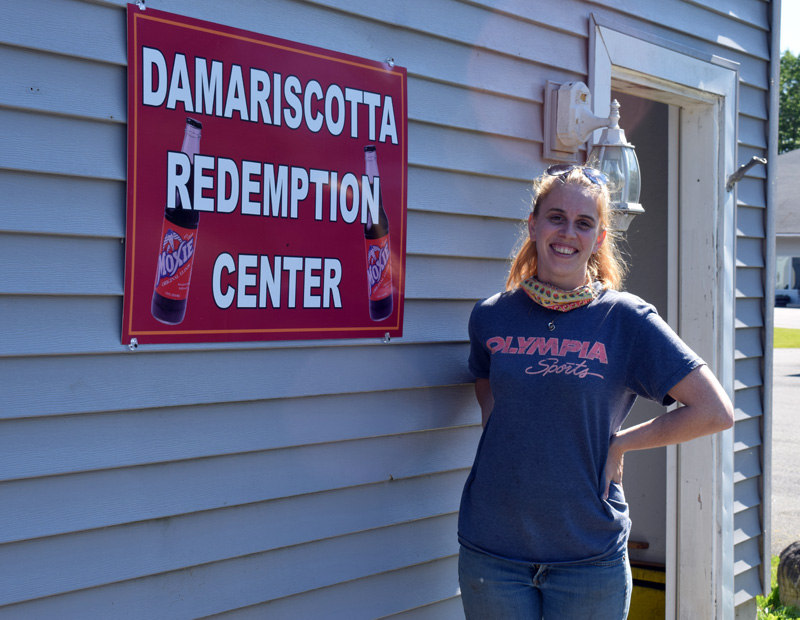 Damariscotta Redemption Center owner Caitlyn Butler stands in front of the center, behind Hilltop Stop in Damariscotta. The center is open from 10 a.m. to 2 p.m. Tuesday-Saturday. (Evan Houk photo)

The business is at 55 Chapman St., behind Hilltop Stop. The building was a redemption center in the past under a series of owners.

Both of Butler’s redemption centers are open from 10 a.m. to 2 p.m. Tuesday-Saturday.

After a slow first week, business has started to pick up in Damariscotta as people, many already regular customers of Butler’s, discover the new location.

“I’ve built up quite a big customer base,” Butler said.

After having their returnables counted and tallied, customers can take a receipt into Hilltop Stop to receive payment.

Butler had expressed interest in expanding to Gary Gravel, owner of Hilltop Stop. Gravel offered to rent her the old redemption center behind the store, which he had been using for storage.

Due to COVID-19 guidelines, only one customer is allowed in the building at a time. The staff will sanitize high-touch areas, like door handles, every hour.

The redemption center includes a space for customers to wait, separate from the area where staffers count returnable cans and bottles.

Butler said both of her redemption centers offer pickup service by request.

“We’re very customer-oriented. If anybody ever needs a pickup, they can just give us a call,” she said.

She said employees will help carry returnables in if a customer needs assistance.

Butler has worked at redemption centers for several years, first in Waldoboro and then in Newcastle.

She got her start at the Waldoboro Smoke Shop in 2010, where she worked for five years, learning everything about the redemption business on the job.

Wendy Benner, the manager of the smoke shop, hired her for a  redemption program the shop was just starting up.

“I just asked distributors, people who picked up, ‘What do I do here?’ and ‘How do I do this?’” Butler said. She looked up other things online. “I trained myself with it all, really,” she said.

She said the most difficult process to learn is how to properly separate cans and bottles, most of which get picked up by different distributors.

“It can get very confusing sometimes. Usually how I train people is I just throw them into it and they work by my side for a week or so and they ask me questions and I answer them. And as I think to tell them things, I do. That’s really the best way to learn this,” Butler said.

Corner Redemption Center was under McGreevy’s Corner Store from September 2018 until the building caught fire in October 2019.

With the damage repaired, Butler is interested in reopening Corner Redemption Center.

“After this settles down a little bit and starts running smoothly, I’ll work my way to Waldoboro. Then I’ll stop for a little bit … maybe,” Butler said with a laugh.

(Correction: A photo caption with an earlier version of this article online and on Page 2 of the June 25 print edition incorrectly reported the center’s hours. The Lincoln County News regrets the error.)