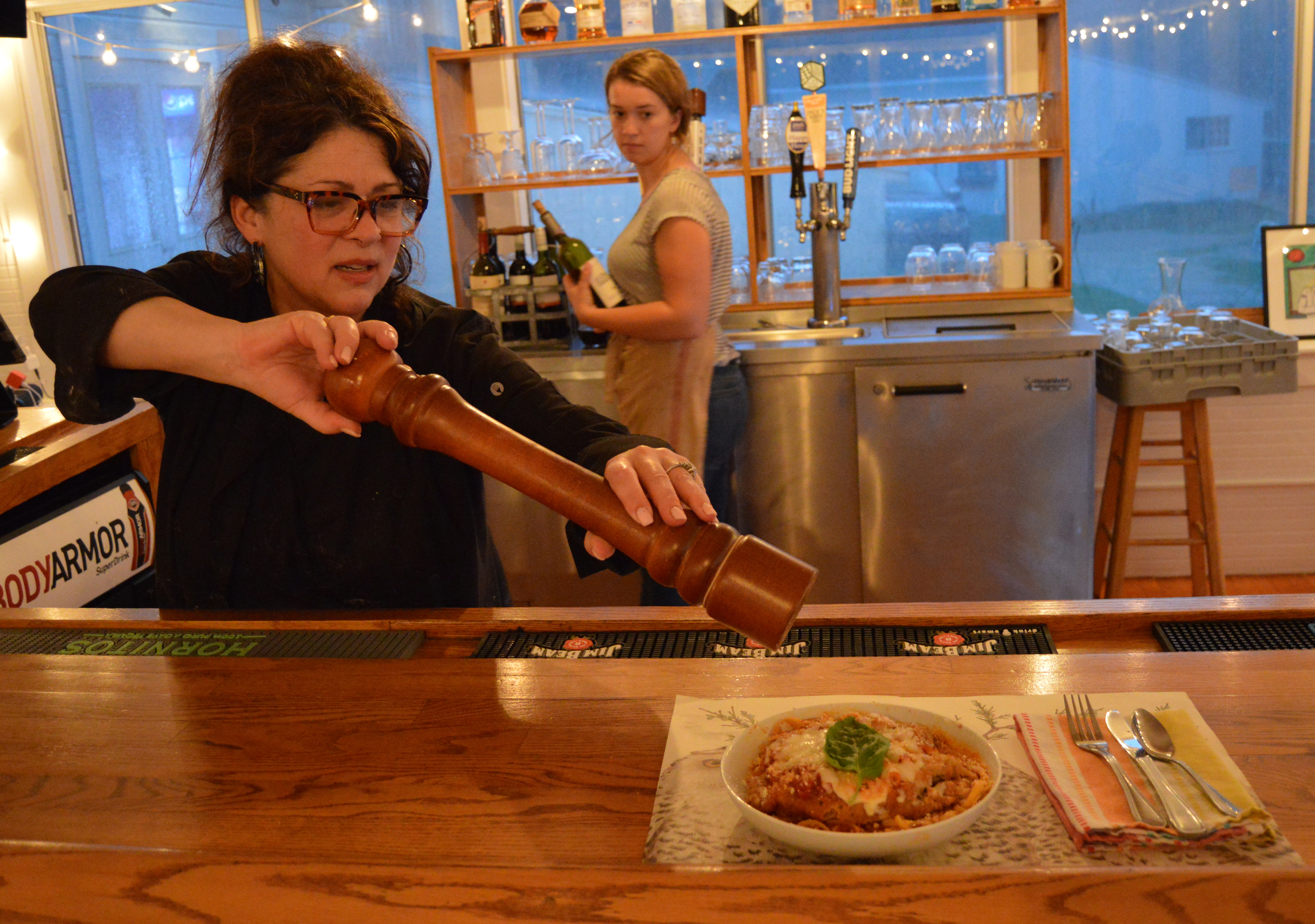 The new White Owl restaurant at Wawenock Golf Club in Walpole is on a mission to bring a “rustic Italian revival to the Midcoast.”

Grace Harrison, one of four equal partners in the White Owl, describes the food as a combination of “Italian flair with a touch of Maine roots.”

The restaurant is now open to the public for dinner starting at 5:30 p.m. Wednesday-Saturday.

Grace Harrison recommends that customers make a reservation well in advance. The restaurant, in only its second week of serving dinner, is filling up fast. Thursday, June 27 was booked solid.

The restaurant has also been serving its “lunch to cart” menu to golfers and the general public for a month. The full-service bar has been in operation during that time, serving a variety of craft beers and select wines. 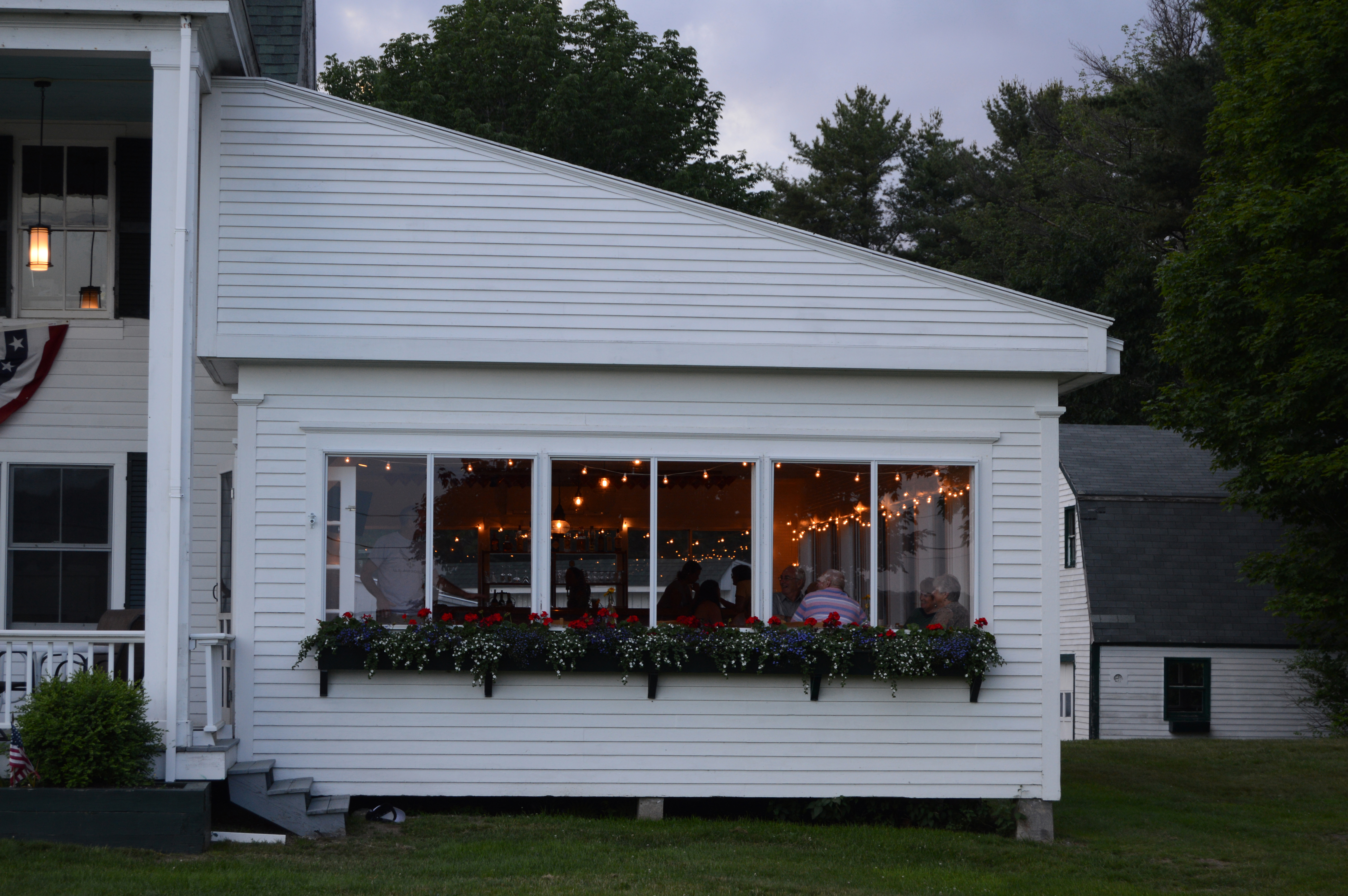 A view from outside the White Owl restaurant at Wawenock Golf Club on Route 129 in Walpole. (Evan Houk photo)

The bar hosts a happy hour on its rustic porch from 4-6 p.m. Monday-Friday with specials on beer and wine.

The atmosphere of the White Owl is open and welcoming, from the wooden floors to the fresh coat of white paint on the walls and ceiling, and the large windows that line the outside of the restaurant. It has the look and feel of a good friend’s back porch, if that friend had a full bar and served traditional Italian food.

Jill Taylor Harrison, Grace’s mother and a partner in the White Owl, said the restaurant has sandwiches and burgers available, but also more elevated lunch fare, such as chicken Parmesan, sausage bombs (a traditional Italian recipe), and chicken or tuna salad.

Lunch is served seven days a week from 11 a.m. until the golf club closes, or until the dining room makes the transition for dinner.

Dinner starts with an amuse-bouche, an hors d’oeuvre provided free and by the chef’s selection that serves to tease the palate. An example from Saturday, June 29 is ricotta with tarragon peas crostini.

According to co-owner Kim Diomede Cognata, the amuse-bouche serves as a greeting and a way to build the welcoming family atmosphere the owners are striving to create.

“People love to know that when they come into a place, that it’s like a family operation. … It has that Old World feeling, just the way this building does,” she said.

Saturday’s amuse-bouche was followed by a light raspberry fruit salad, then the main course of veal Parmesan, topped with a thick, savory, and slightly sweet red sauce.

Finally, a tray of black cherries served over ice and a dessert spread was served that included fresh raspberries, chocolate-dipped biscotti, and three Italian almond cookies.

“We kind of have a changing menu at dinner because if we get fresh halibut off the boat, we’re going to run halibut that night, and then whatever other creative inspirations come,” Grace Harrison said.

The White Owl is a partnership between the Wawenock Golf Club and the four co-owners of the restaurant: Grace Harrison, Taylor Harrison, Kim Diomede Cognata, and her son, Dominick Cognata. All four owners have years of experience working in and running restaurants or owning businesses.

Taylor Harrison thanked the Wawenock Golf Club and its board for their help and support in the renovations of the historic space and generous equipment upgrades. The White Owl has a new stove, oven, and dishwasher from Wawenock. 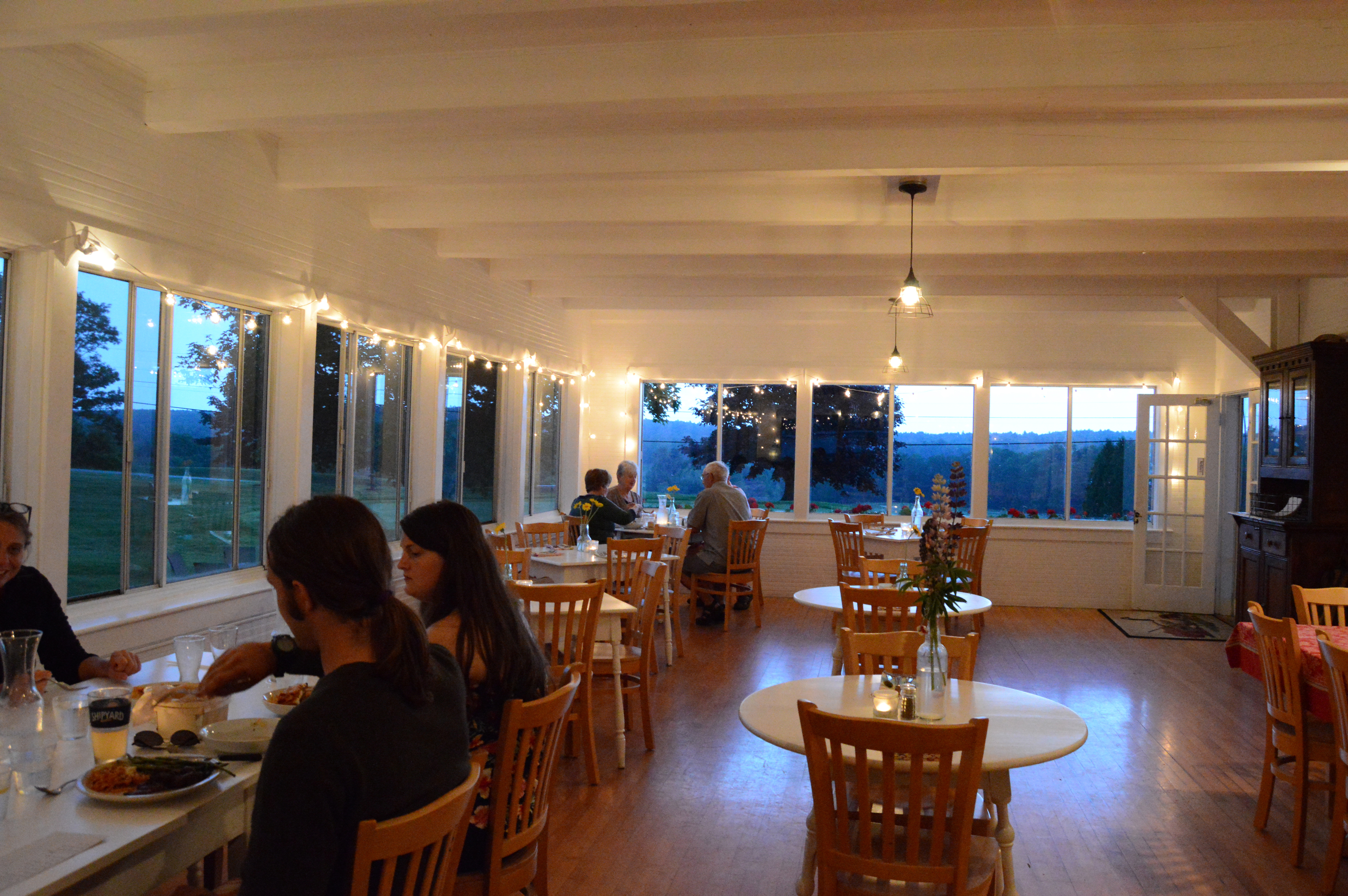 Patrons dine Saturday, June 29 in the rustic interior of the 1928 building that houses the White Owl, the new restaurant at the Wawenock Golf Club in Walpole. (Evan Houk photo)

Taylor Harrison first met with Wawenock when she heard that the club was looking for new restaurateurs to take over the space.

She contacted her longtime best friend, Kim Diomede Cognata, who has cooked in restaurants since high school and has also run several kitchens, and asked if she was interested in partnering with her in the new venture.

Kim Diomede Cognata then brought her son, Dominick Cognata, into the venture to help in the kitchen. Dominick Cognata said he has worked in restaurants since his senior year in high school and has learned a lot from his mother and her home-grown kitchen skills.

Kim Diomede Cognata said she never received formal training for cooking, but learned everything she knows in her family kitchen. That is one of the reasons, she said, why it feels like she is always cooking for family and friends at the White Owl.

All of her traditional Italian recipes have been passed down from her grandmother. She said she is cooking at the White Owl the same way she does at her home for family, and she sees the cozy and homey restaurant as an extension of that.

She stressed that the culinary crew only uses local meats and ingredients for all of their dishes.

“We want to bring a different edge to it. … Everybody has different ideas and we like to put everything together and see what happens,” Dominick Cognata said of the food and the changing menu. 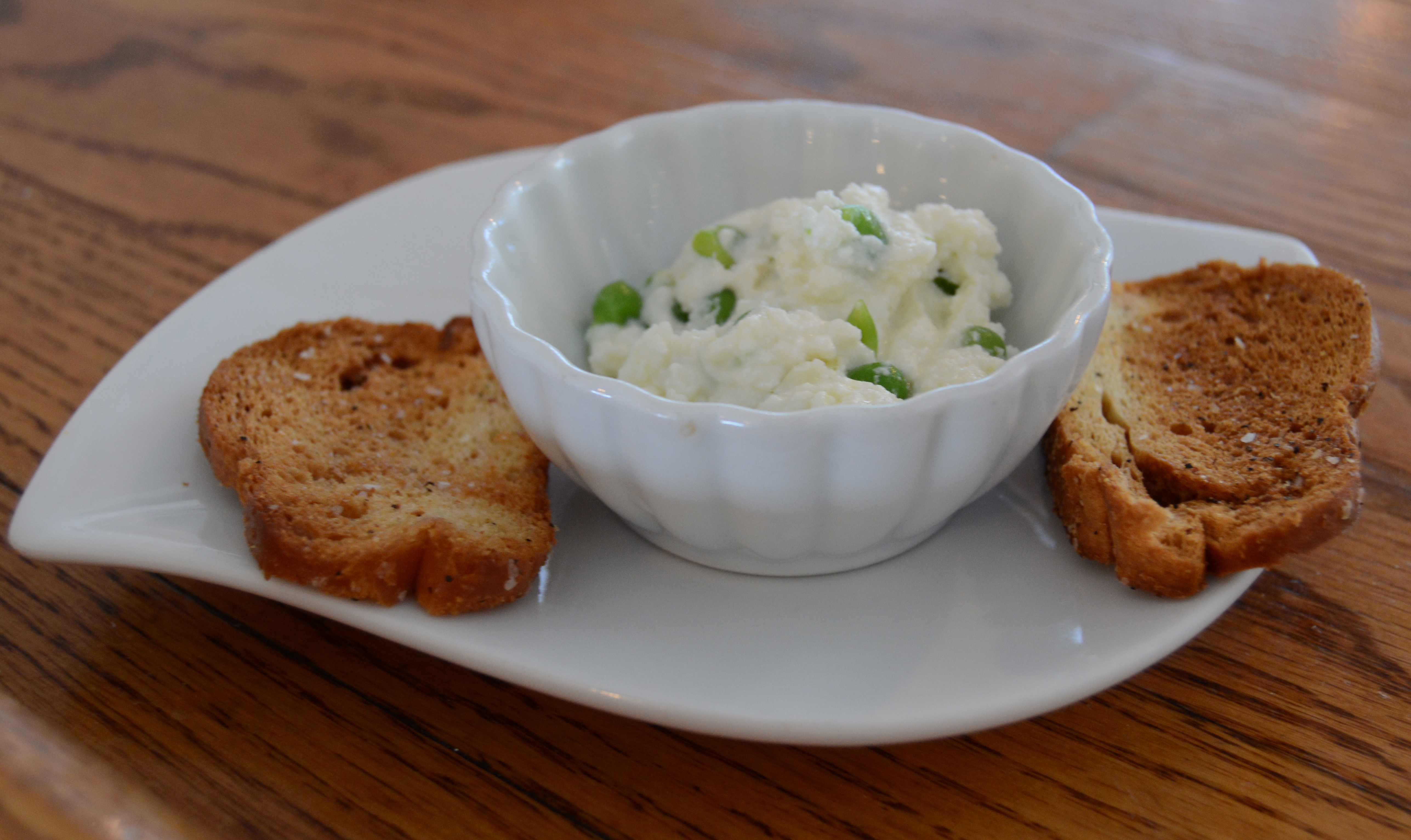 The Cognatas are the wizards in the kitchen, while the Harrisons mostly run the front of the restaurant, in serving and management roles.

All four partners work full time and in any capacity that is needed.

“We can come back (into the kitchen) and step in and help. They can come out here and do whatever. Dominick was bartending the other night for all the golf men. I went and did dishes because we have the golf league on Wednesday nights,” Taylor Harrison said.

Taylor Harrison, who lives in the Christmas Cove area of South Bristol, said most of her experience has been on the business side, since she owned and ran several health clubs for years.

“I love business and I love this spot,” Taylor Harrison said.

Grace Harrison is in the process of finishing graduate school and is home for the summer to help run the White Owl. Her background includes  working in restaurants like the acclaimed Restaurant Trokay in Truckee, Calif.