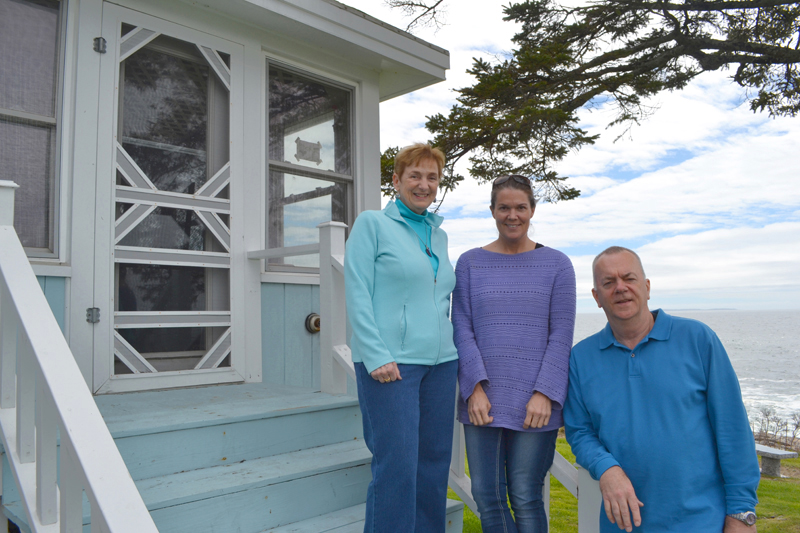 Tim and Betsey Norland have had a special place in their hearts for Pemaquid after first visiting the area together in 1980. Starting this summer, the Norlands’ annual trips will no longer be just as visitors, but also as the owners of the Sea Gull Shop.

The Norlands, of Lambertville, N.J., purchased the Sea Gull Shop, next to Pemaquid Point Lighthouse Park, from longtime owner Paula Houghton in March. Since then, the Norlands and Brooke Cotter, the general manager of the restaurant and gift shop, have been preparing for Mother’s Day weekend, when the business will open for the season.

“Betsey and I first met when we were both working in theater, so for us, Mother’s Day is opening night,” Tim said. “Everyone is rushing around, getting things done for when the curtain goes up.”

While Tim and Betsey first visited Pemaquid together a year after they were married, Betsey’s history with the business dates back even further. In 1959, Betsey visited the Sea Gull Shop with her grandmother.

“She told me she came here when she was growing up, which was around 1910,” Betsey said. “This place is in my genes.”

Since 1980, Tim and Betsey have made Pemaquid a second home. For years, they would rent a home for a few weeks during the summer before purchasing a house half a mile away from Pemaquid Point.

The Norlands’ annual visits to Pemaquid always included a visit to the Sea Gull Shop for breakfast, lunch, and dinner. Tim’s favorites include the eggs Benedict and the Maine lobster bake, while Betsey prefers the blueberry pancakes and the captain’s pie.

The Norlands knew Houghton had been looking to sell the business for quite some time, but the idea to purchase the business didn’t crystallize until a few things fell into place, Tim said.

Cotter’s willingness to stay on as general manager played a large part in the couple’s decision, Tim and Betsey said. Cotter, an employee of Houghton’s for the past five years, has experience as a waitress and managed restaurants for her parents in the past.

“We wouldn’t be doing it without her,” Betsey said.

After closing on the business in mid-March, the Norlands, Cotter, and the staff of the Sea Gull Shop started renovations, including putting new carpet in the dining area and new flooring in the gift shop. Gabe Shadis, Cotter’s husband, installed the new kitchen equipment and will cook in the restaurant on weekends, Cotter said.

Cotter’s son, Aidan Shadis, will be a server at the Sea Gull Shop over the summer. She said her daughters, Emory and Willow, hope to one day wait on the people who sit at the counter in the gift shop.

There are other family connections within the staff of the business, including mothers and daughters, siblings, and cousins, Cotter said.

The menu and recipes for customer favorites like the blueberry pancakes will remain the same. The restaurant will add daily vegetarian specials and new menu items.

In the future, Tim hopes to set up a webcam overlooking the waves crashing on the rocks and stream it to the gift shop for people dining at the counter.

“That way, no matter where people are sitting, they can have an ocean view while they eat,” Tim said.

Tim and Betsey own a house in Pemaquid, where Betsey will be for the season. Tim will be flying back to New Jersey for his job as president at Norland Products Inc., which manufactures and sells specialty adhesives, analyzes fiber-optic connectors, and distributes gelatin made from codfish skins.

Cotter, of Damariscotta, will oversee the day-to-day operations of the business. The Norlands will mostly remain in the background, they said.

Since purchasing the Sea Gull Shop, Tim and Betsey said they have received support from regular visitors to the business.

“We felt it was an integral part of coming to Pemaquid Point and a huge part of the community, and we wanted to keep that going,” Tim said. “There’s a very supportive community in this area, and it’s part of the reason why we love coming here.”