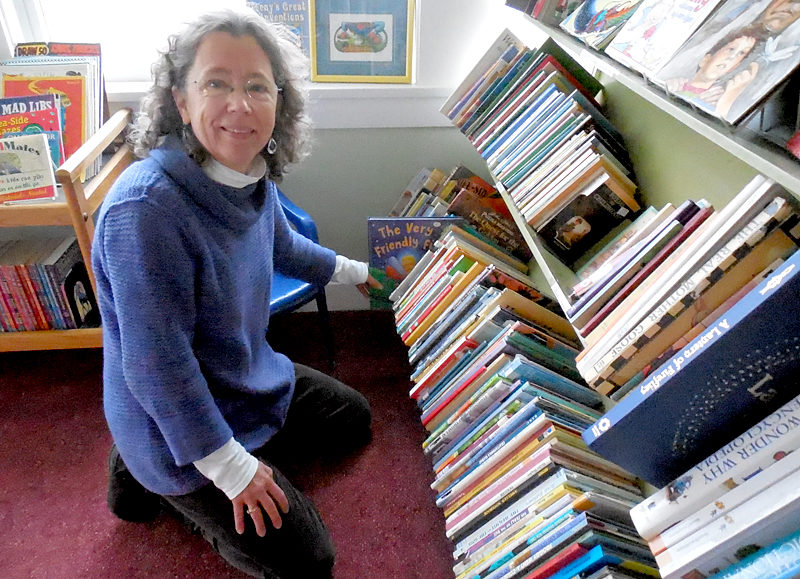 Rosie Bensen, co-manager of the Skidompha Secondhand Book Shop in Damariscotta, shelves books in the children’s section of the newly relocated book shop, which is set to open Wednesday, Feb. 1. (Christine LaPado-Breglia photo)

Upon entering the brand-new location of Skidompha Secondhand Book Shop at 17 Backstreet Landing in Damariscotta, one immediately feels welcomed. The spacious, warmly carpeted interior features row upon row of books, with ample space between rows so as to not seem crowded. Tucked into corners of the various rooms of the new book shop are pairs of chairs for cozy sitting and conversation, including two inviting chairs and a table in front of the shop’s working fireplace, and tiny, kid-sized chairs in the roomy children’s section. In what used to be the kitchen of the former restaurant, chairs encircle a large table in what has been cleverly designated as the book shop’s cookbook section. 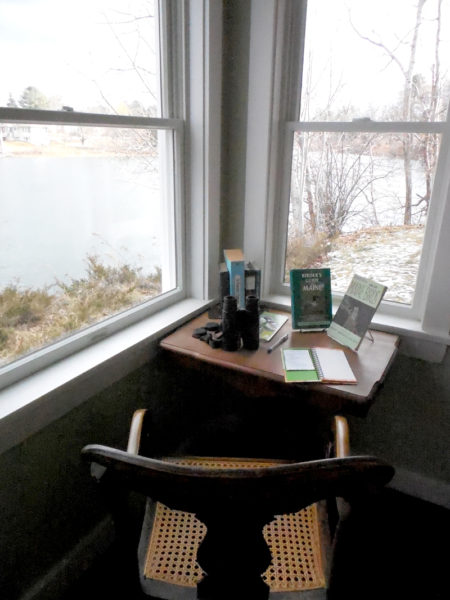 The birdwatcher’s nook at the new location of Skidompha Secondhand Book Shop overlooks the Damariscotta River and features bird books, a pair of binoculars, and a nature journal. (Christine LaPado-Breglia photo)

What may be most striking, however, is the sheer number of windows in the place – many of them overlooking the Damariscotta River. Practically every inch of every wall features a bank of windows that lets in soothing natural light and offers, in many cases, beautiful views of the river and wildlife.

“When we heard we were going to have this space, my daughter told me, ‘I hope it will be as quirky and cozy as the old space,’” Rosie Bensen said recently. Bensen, who co-manages the all-volunteer book shop along with Rem Briggs and a management team, pointed out that the square footage of the new shop is “almost double what we had before” in the shop’s former Elm Street location.

“The challenge was to create little spaces within the big spaces – and also to preserve the views,” she said. That goal has clearly been accomplished.

Some of the “little spaces” are particularly inviting. In the classics room – featuring books by the likes of Edith Wharton, Walt Whitman, Virginia Woolf, and so on – there is an artist’s nook with a chair, an easel and paper, and a cup containing various pencils. In one room – the one housing an art-book section that is twice as big as the one in the shop’s former location – is a “birdwatcher’s nook,” as Bensen described it. It contains a small desk, a chair, a number of books about birds, a pair of binoculars, and a nature journal in which to document birds spotted outside the windows. “People can write down what they observed,” said Bensen.

As she spoke, a pair of buffleheads cruised by in the water. Bensen said she saw a bald eagle fly by one day and a pileated woodpecker sitting on a tree branch right outside the window the next day. “This is birdwatcher’s heaven,” she said. “Boy, do we feel fortunate!” 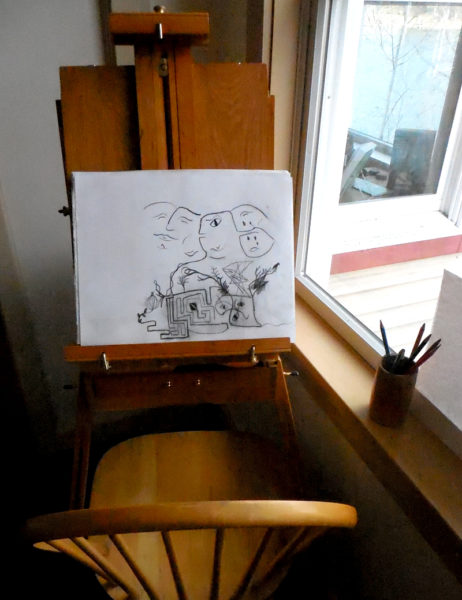 Bensen stressed that the book shop is “an aesthetic resource for the community,” which is why it was so important to preserve the river views. None of the bookshelves were placed in front of windows.

Bensen pointed out a framed document over the fireplace stating that the secondhand book shop was first established in June 1968 by the late Mary Wallace Smith. “We’re coming up on 50 years,” Bensen said as she continued on to the nautical section on the west side of the shop. “We have nautical books near the water,” she said, smiling. “We had fun, you can tell.”

Bensen is keen to thank the many volunteers that helped the book shop get situated sooner than planned. “We opened up to donations earlier than we were supposed to because we got in here so quickly,” she said. “It was a combination of people who had signed up to help us and people who wandered in to see what was happening and stayed to help us. It’s the kind of thing this community does beautifully. Ten people have signed on to volunteer here as a consequence of helping us.”

Bensen is excited about the future and looks forward to being discovered by more and more people, especially once the new signage goes up leading people from Main Street to the book shop’s tucked-away riverfront location.

“You have like a book triangle here – you have the library, you have Sherman’s Maine Coast (Book Shop), and this shop,” said Bensen enthusiastically. “Damariscotta has become a destination for books.”

Skidompha Secondhand Book Shop opened at its new location Wednesday, Feb. 1. In addition to a wide array of books, including gardening, self-help, and “50-centers,” the book shop also offers DVDs and a large selection of CDs. The shop is open from 9 a.m. to 4 p.m. Monday-Saturday, except for Thursdays, when it will stay open until 7 p.m. For more information, call 563-7807 or go to skidompha.org.