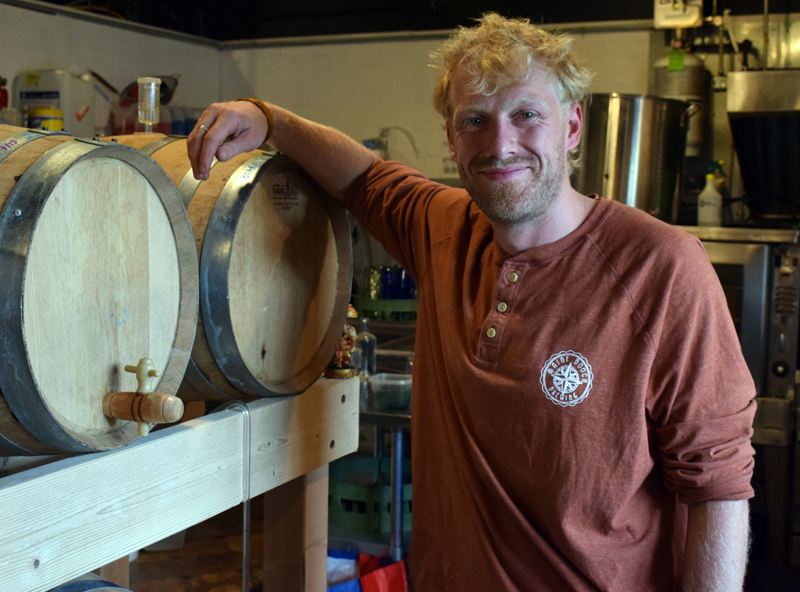 Chauncey Erskine, owner of Maine Booch, stands by a bourbon barrel from Split Rock Distilling used to ferment his kombucha and make it alcoholic on Monday, Aug. 2. Maine Booch will be opening a tasting room at 85 Parking Lot Lane in the Damariscotta municipal parking lot from 5-9 p.m. on Monday, Aug. 9. (Evan Houk photo)

Maine Booch is looking to put the hooch back in kombucha by opening a hard kombucha tasting room in the municipal parking lot in downtown Damariscotta.

“Booch is the colloquial term for alcoholic kombucha,” owner Chauncey Erskine said during an interview on Monday, Aug. 2 of the increasingly popular health drink. “Like hooch, you know, your bootleg hooch.”

Maine Booch will open from 5-9 p.m. Monday, Aug. 9, at 85 Parking Lot Lane, in the space formerly home to Van Lloyd’s Bistro with a deck facing the parking lot and a view of the harbor.

Erskine, of Damariscotta, said hours are subject to change as he works things out at the tasting room, but Maine Booch will tentatively be open Sunday through Tuesday from 5-9 p.m. for now.

“I’m going to do some sneaky Saturdays in there, too,” Erskine said, noting  the hours are based on his availability as he also manages the Mexicali Blues store in Freeport.

There will be three flavors of hard kombucha on tap, all between 5% and 9% alcohol by volume. There is a ginger flavor called the Booch and Stormy; a blueberry and juniper flavor, and the Aloha Booch, which is flavored with ginger and hibiscus.

“It doesn’t taste anything like kombucha. It’s just an effervescent, tasty, alcoholic beverage with a punch,” Erskine said.

Erskine starts by brewing kombucha using green tea from Samovar Tea and SCOBYS, an acronym that stands for Symbiotic Culture of Bacteria and Yeast, in his two SCOBY barrels.

“What it does is it consumes sugar and caffeine and it excretes and produces probiotics and trace amounts of alcohol,” Erskine said. 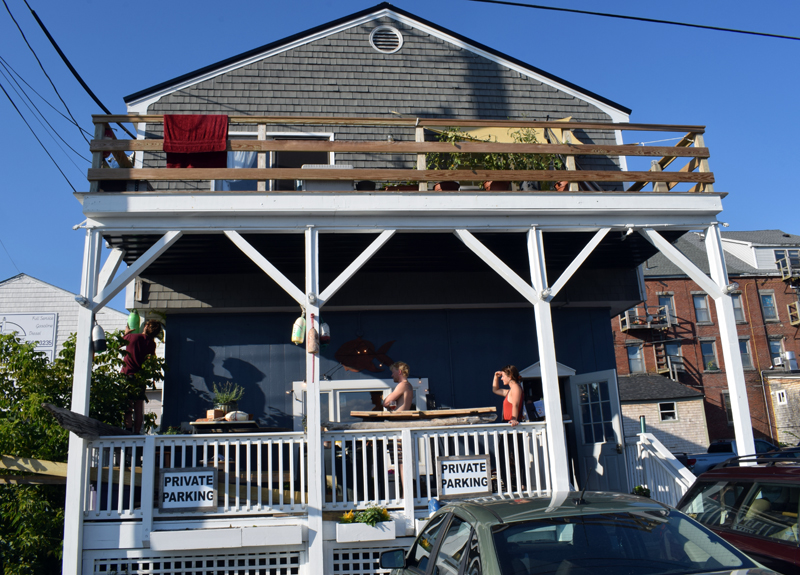 Regular kombucha typically has the alcohol extracted to avoid regulation and identification requirements for purchasing it.

After a few weeks of fermentation, Erskine transfers the freshly-made kombucha into bourbon barrels from Split Rock Distilling, and adds more sugar and Champagne yeast for the secondary fermentation process.

He said in the U.S., bourbon barrels can only be used once to age bourbon, so Split Rock has barrels available for sale.

Flavoring is added after the fermentation using local, organic botanicals.

Many of the probiotics are cut when the kombucha is transferred to the secondary fermentation process, allowing one to drink a number of the hard drinks in a sitting.

“It’s very crushable,” Erskine said. “It doesn’t have as much kombucha as a kombucha because you’re kind of cutting it in order to do that additional process.”

Erskine started making kombucha during COVID-induced lock downs last year, and began to experiment with alcoholic kombucha. After one socially- distanced bonfire where his friends, mostly kombucha skeptics, tried his homemade brew and enjoyed it, he decided to pursue the venture.

“They were all pleasantly surprised and really excited. That’s when I decided, ‘I think I’m going to go for it,’” Erskine said. 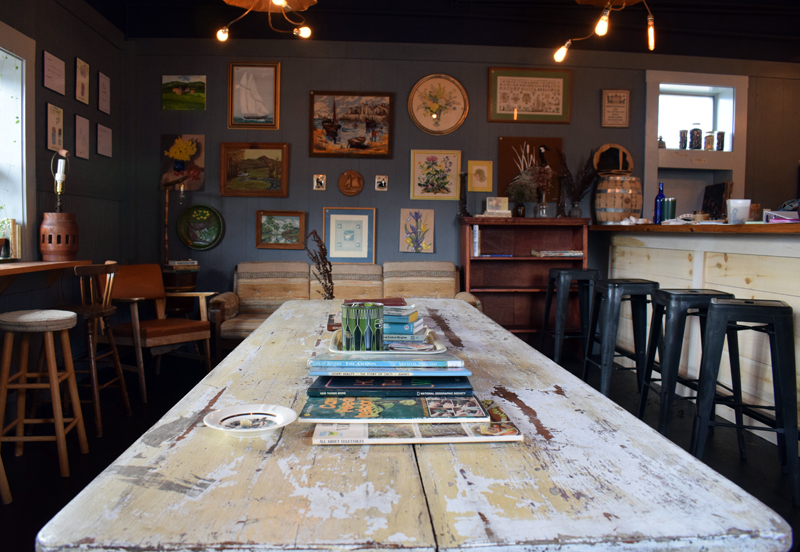 Another goal is to host a sustainable and vintage atmosphere in the space with the help of New Harbor artisan Danielle Filosa, who is decorating the tasting room.

Filosa said that everything in the space is for sale, with the exception of the furniture. There is vintage art decorating the walls, vintage magazines and books, and even vintage glassware that can be purchased. The goal is to create a flow of rotating vintage items that will change over time.

“The glass they’ll be drinking kombucha out of, they can buy if they want to,” Filosa said.

Maine Booch will also feature a different artist each month. The first art group to be featured is the Portland-based Bomb Diggity Arts, which “serves artists with intellectual disabilities both in the studio and the community,” according to its website.

Erskine said he also will have some 1980s-era point-and-shoot Minolta cameras around the shop for patrons to take pictures on film and then contribute them to a “film wall.”

In keeping with the sustainable theme, all the shirts available for sale are upcycled from thrift shops and imprinted with the Maine Booch logo.

According to the Oxford English Dictionary, upcycle means to “reuse (discarded objects or material) in such a way as to create a product of higher quality or value than the original.”

Erskine also uses his record player as the music system at Maine Booch and plans to host “bring your own vinyl” nights in the future.

He said that one of his main goals is “keeping everything as sustainable as possible” and that ethos is reflected in the way the business is set up.