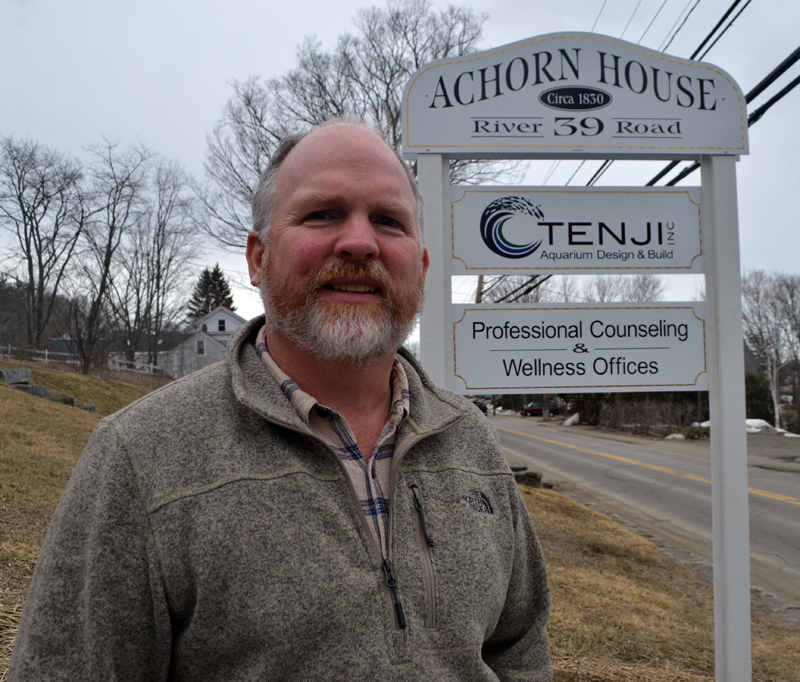 A large aquarium near the main entrance of L.L. Bean’s flagship store in Freeport greets almost 3 million visitors annually, but local shoppers might not know that a Newcastle business was behind its design and construction.

Edward “Ed” Seidel, of Damariscotta, co-owns Tenji Aquarium Design + Build, a company that designs and builds aquatic systems and exhibits. Seidel co-founded Tenji with Andy Case and Mark Faulkner in 2001, when the three worked for the Monterey Bay Aquarium in California.

After graduating from Middlebury College in Vermont with a major in biology and a minor in art, the Camden native wanted to find a job that would allow him to combine his two passions. During his job search, his grandmother sent him a National Geographic article about the Monterey Bay Aquarium.

“I remember (in the article) it said ‘where science meets art,’ and I just thought, ‘bingo, this is it,’” Seidel said.

Seidel’s first job at the aquarium involved driving a “mobile aquarium” to schools and migrant camps in the area to teach children about the ocean. Later jobs at the aquarium would include raising multiple generations of cuttlefish from hatchlings to adulthood and performing “underwater gardening” in the Kelp Forest tank.

Seidel also curated multiple exhibits for the aquarium’s wildlife, including one about the giant Pacific octopus. When creating an exhibit, curators must consider a number of criteria, taking into account not only the scientific accuracy, but also the aesthetics of the display.

“You want to be as accurate as you can in the most visually pleasing way with the space you have available,” Seidel said. “It can sometimes be a tall order, but you get to problem-solve and come up with these creative solutions.” 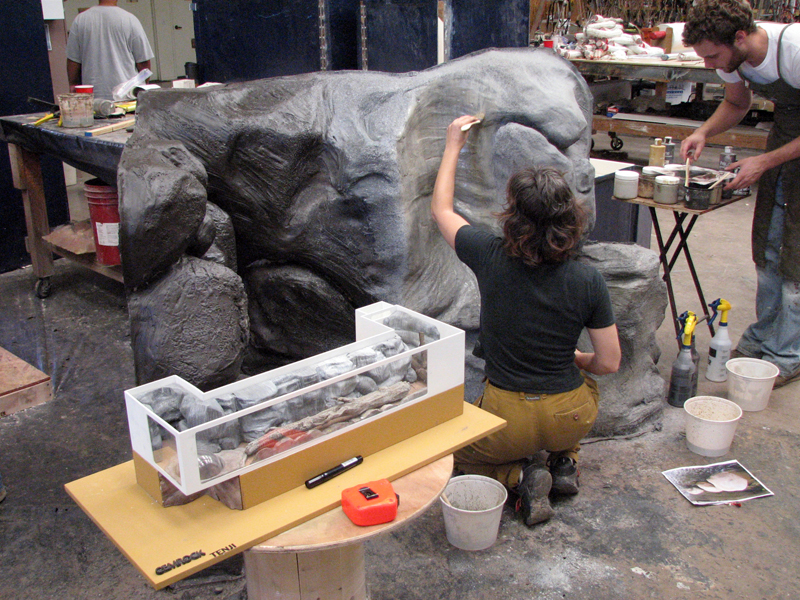 For some displays, designers create rocks, coral, and trees using items such as foam, fiberglass, and PVC pipes. The custom-made display items ensure staff has complete control over the environment the animals live in, Seidel said.

While working at the aquarium and pursuing his master’s degree in marine sciences from California State University’s Moss Landing Marine Laboratories, Seidel also took on small side projects, creating displays or advising other curators.

“At first it was small parts of projects here and there, but then it just grew and grew,” Seidel said. “It reached a point where (Case, Faulkner, and I) talked about taking the next step and starting our own business.”

With support from the aquarium, the co-workers stepped away and created Tenji. In Japanese, the word tenji is used for display or exhibit, but the characters translate to “the detailed start-to-finish process of gathering complex information and presenting it in coherent and compelling ways.”

“When you’re designing aquatic systems, there’s a huge amount of deep science that goes into it: biology, ecology, physics, chemistry. You have to take it all into account, while also considering the aesthetics of what you’re designing,” Seidel said. “There are so many fine details that go into an aquarium that people don’t notice or think about, and that means we did our job.” 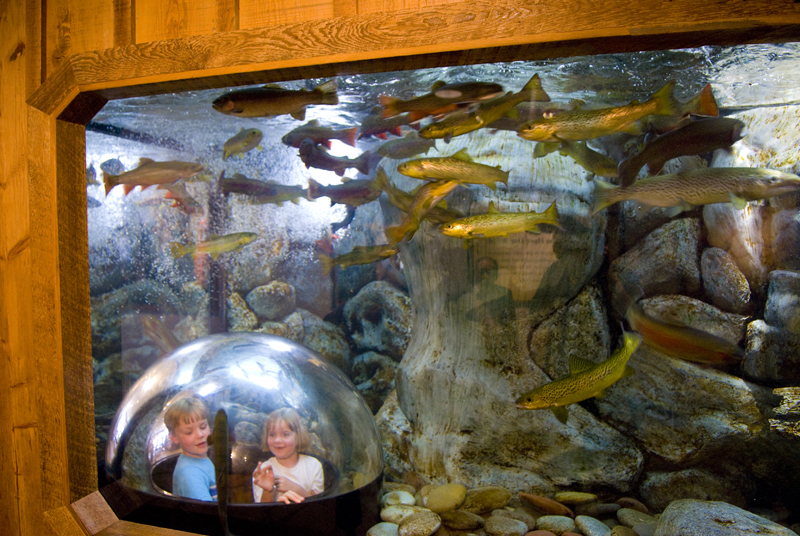 In 2004, Seidel moved back to Maine with his wife, Lisa Katz, and their children. The move created Tenji’s East Coast office, which consists of Seidel and Peter Nadeau, the director of construction. The Newcastle office and the office in Pacific Grove, Calif. employ a total of a dozen people, not including contractors for the build and installation process, Seidel said.

Originally located in Damariscotta, Tenji’s office relocated to 39 River Road in Newcastle when Seidel and Katz purchased the Achorn House. Katz is a social worker, and the building also houses her office and other professionals who lease from the couple.

Over the years, Tenji has worked on projects across the globe, from three-story exhibits at Cabela’s locations in North America to Aquamarine Fukushima, an aquarium in Japan. Tenji has also installed large aquariums in private residences.

One of the most memorable projects Seidel worked on was a 7,500-gallon saltwater aquarium above a bar at the Sacramento nightclub Dive Bar. Tenji had to design the tank to support human as well as marine life, as both fish and professional “mermaids” swim through the tank daily. 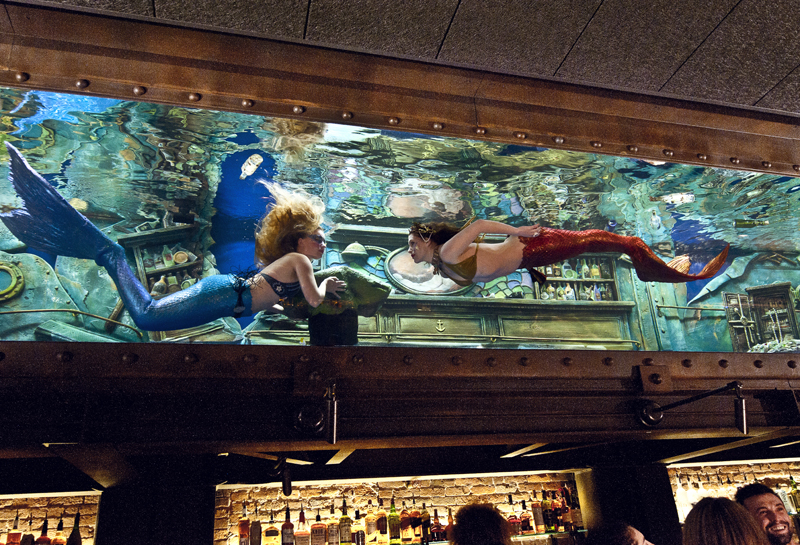 Seidel estimated that Tenji has about 30 projects either scheduled or in construction. The length of time a project takes depends on a number of factors, including the size and the number of moving parts involved, he said.

Currently, Tenji is working on exhibits and an expansion project for the Bailey-Matthews National Shell Museum in Sanibel, Fla. The museum is the only museum in the country completed devoted to shells and mollusks.

The project also includes a redesign of the building’s facade. Portland artist Michael Lewis drew the plans for the building based on sketches and notes from Tenji.

One of Seidel’s favorite projects is located a bit closer to home. In 2007, Tenji completed the installation of the 20-foot, 3,500-gallon freshwater Riverbed Aquarium at L.L. Bean. The aquarium is stocked with Atlantic salmon and brown, brook, and rainbow trout, which visitors can see close up from a viewing dome on the tank floor.

“It wasn’t something that was particularly big or complicated with a lot of moving parts, but it’s more personal than the other projects I’ve worked on,” Seidel said. “I’m from Maine, and generations of my family have grown up with L.L. Bean, and it’s neat to have done something for them.”

For more information about Tenji or to view more of the company’s work, go to tenji.com or find Tenji Inc. on Facebook.