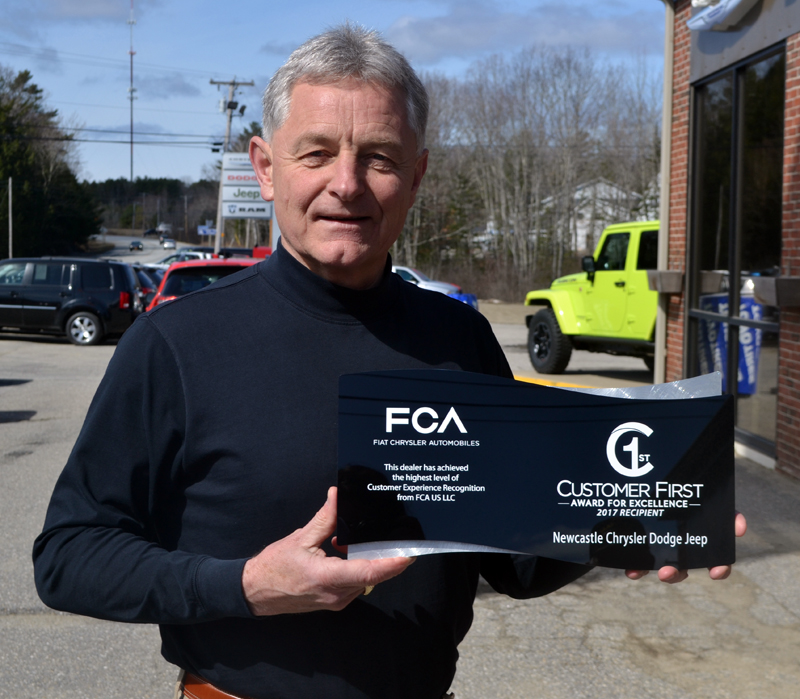 Only six dealerships in Maine, including Newcastle Chrysler, have earned the award since it was introduced.

Every employee at Newcastle Chrysler has worked hard to bring the dealership up to the high standards necessary to receive the award, according to Randy Miller, the dealership’s president.

The work paid off, and in December the dealership received notification that it was one of this year’s honorees. Mike Germana and Sam Polonsky, of Fiat Chrysler Automobiles, visited Newcastle Chrysler to present the award Thursday, April 13.

“I was thrilled to find out that we were chosen, but it’s not about me,” Miller said. “This award is about my wonderful co-workers, who work hard here interacting with customers, but also at home to earn their certification and go through training.”

“I really could not be more proud of them,” Miller said.

The customer-first attitude existed at Newcastle Chrysler long before it earned the award, Miller said.

“The people who come here aren’t our customers, they’re our friends,” Miller said. “At Newcastle, you’re a friend, you’re not a number.”

The attitude extends into the community, Miller said. He is actively involved in the Damariscotta Region Chamber of Commerce, which named him its 2016 Business Person of the Year.

In December, Miller received the 2016 Real Man Award from the American Cancer Society of Maine for raising $17,763 for the organization’s Real Men Wear Pink fundraiser. Miller said he plans to host another fundraiser for the organization this year. The dealership collects gifts for area children during the holiday season.

Newcastle Chrysler is eligible to earn the Customer First Award for Excellence every year.

“We won’t try to earn it, we will achieve it,” Miller said. “Our customers deserve nothing less.”