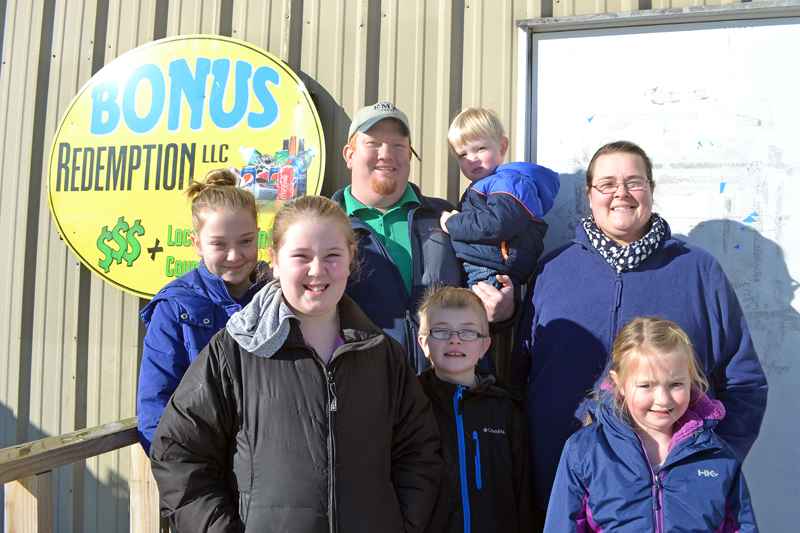 As of Monday, Jan. 8, Bonus Redemption LLC is under new ownership.

“Casey and Erica seem like good people, and it’s been good working with them,” Bonenfant said. “Not to talk bad about ourselves, but we’re trying to make up for what went wrong, which was bad management, and we hope that the community can understand and give us another shot.”

The idea to purchase the redemption business came to Erica Stevens after seeing the need in the community.

“It’s something we never really thought about until one day I pulled into a redemption center in Brunswick and a lightbulb just went on,” Erica Stevens said.

“We figured we might try and buy one and (Bonenfant and Herald) were interested in selling to us,” Casey Stevens said.

During the Stevens family’s first full day of ownership Tuesday, Jan. 9, the Damariscotta location, next to Hilltop Stop, reopened as a redemption center. Recently, the location had only been used as a drop-off site, Casey Stevens said.

The Newcastle redemption center, at 116 Mills Road, was also open for business.

Bonus Redemption’s Waldoboro location is closed, and the Stevens do not plan to reopen it, Erica Stevens said.

Erica and Casey Stevens are both the owners and managers of the business. Erica Stevens said she will be “as hands-on as possible” while Casey Stevens will likely not be as active in the business due to his full-time employment as director of the Lincoln County Emergency Management Agency.

All employees have decided to stay on at Bonus Redemption LLC after the change in management, Erica Stevens said. The business’s hours have slightly changed, as the centers will be open until 6 p.m. on weekdays.

Bonus Redemption will again offer pickup services to local businesses and organizations. Customers will still have the option to drop off their bottles and return later for their return. The Stevens have created a new labeling system, and all containers will be marked for accountability purposes.

Casey and Erica Stevens have also worked out an agreement with the previous owners to pay back existing accounts. “It may take us some time, but we will pay everyone back,” Casey Stevens said.

The Stevens family has been working quietly on the purchase for a while, but didn’t make the news public until Monday afternoon. The positive response from the community was overwhelming, Erica Stevens said.

“We’ve received a lot of supportive comments from friends and family, and we’re really looking forward to seeing this through,” Erica Stevens said. “We’re all about the local community.”

Casey Stevens said anyone with questions or concerns should call the business at 380-5221.

Both locations of Bonus Redemption will be open from 10 a.m. to 6 p.m. Monday, Tuesday, Thursday, and Friday, and 8:30 a.m. to 4:30 p.m. Saturday. Both locations will be closed Wednesday and Sunday.