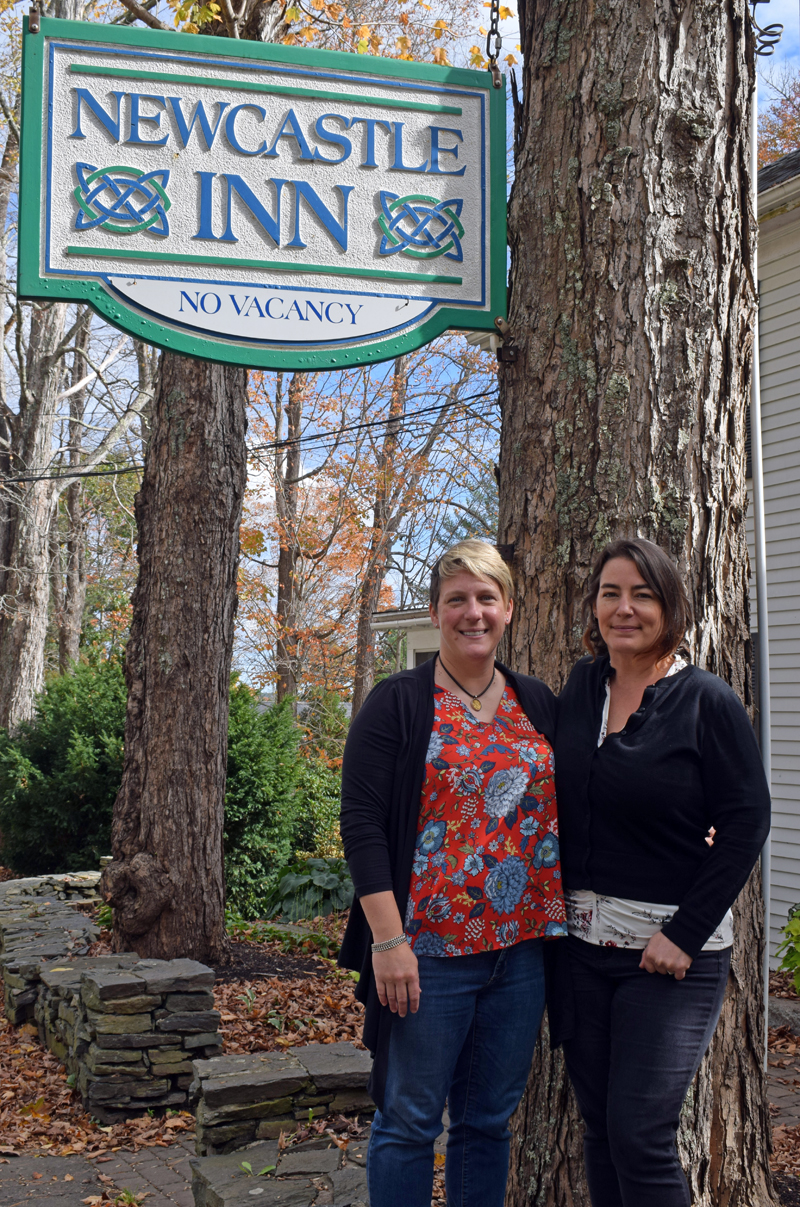 The new owners and operators of the Newcastle Inn, married couple Liz and Carolyn Cooke, stand by the sign for the River Road establishment. The duo plan to keep things the same for the time being at the beloved bed and breakfast. (Evan Houk photo)

The new owners of the Newcastle Inn, married couple Carolyn and Liz Cooke, said they plan to stay the course for the time being at the popular River Road bed and breakfast.

“It’s such an old building and it’s so beautiful,” Liz Cooke said during an interview on Oct. 18.

The duo moved from South Portland into the owner’s quarters next to the inn and officially took over on Sept. 30.

They have had sort of a trial-by-fire, saying the inn has been basically fully booked since they started, partly due to Damariscotta Pumpkinfest.

There are 14 rooms in the bed and breakfast and another six rooms in the carriage house, which the owners shut down for the winter the week of Oct. 18.

Both Carolyn and Liz enjoy cooking and have introduced a few new things to the menu. Prior to purchasing the inn, Carolyn worked at an Italian market doing commercial-scale baking, which she said prepared her to feed the up to 20 parties of people that the inn can hold at one time.

Some of the new baked goods are pumpkin bread, blueberry muffins, and baked apples.

“It’s nice to be able to use local things that are in season,” Liz said.

Carolyn and Liz said they love to cook, host people, and entertain, so getting into the hospitality industry seemed like a natural fit.

Liz works as an accountant, but said she missed the “dealing with people aspect” that is now a part of daily life at the Newcastle Inn.

Liz told a story about how one couple that stayed at the inn after they took over went to Camden for a hike and became engaged. She said another couple came back to stay at the Newcastle Inn for their 25th wedding anniversary because that is where they spent their wedding night.

“It’s nice to be a part of that. Because when you have them staying at your inn, you become part of their experience. It’s kind of wonderful,” Carolyn said.

Liz said a lot of people already dropped in simply to say hello or tell stories and share memories about the Newcastle Inn.

“Everyone who we’ve met in the area, or who’ve dropped in, have been super, super nice. I love that community feel,” Liz Cooke said.

The Cookes are now living in the owner’s quarters next to the inn with their three cats.

Carolyn said that in the future, after settling in, she may decide to open up the inn’s restaurant for special events, such as a homemade pizza and beer football night.

The Cookes said they considered purchasing a bed and breakfast for years, before Carolyn lost her job in August 2020 due to the COVID-19 pandemic and they were catalyzed to begin seriously looking for an inn.

Carolyn worked for 13 years in sales for a company that organized conferences in life sciences and biotechnology.

The two found the Newcastle Inn and decided to take it for a test drive this past May and ended up staying an extra night in a different room, so they were able to experience two different rooms.

They even visited Glidden Point Oyster Farms and fell in love with the area. 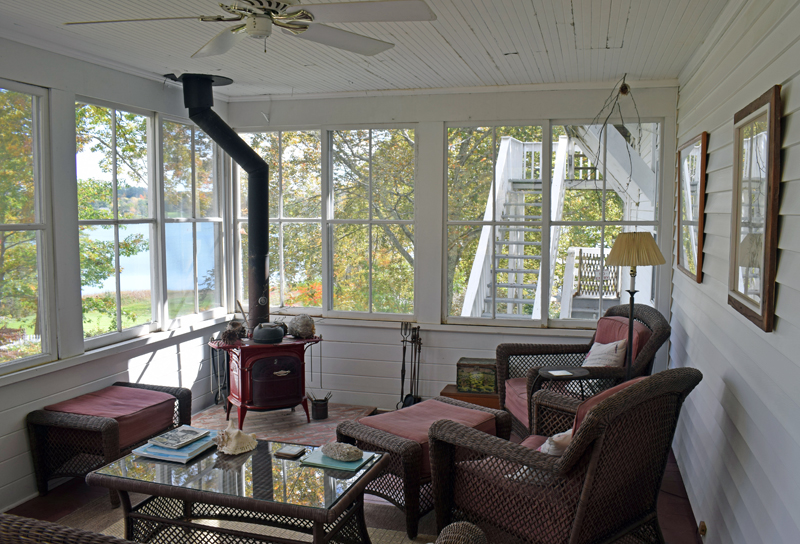 A sunroom offers a view of the Damariscotta River at the Newcastle Inn. New owners Liz and Carolyn Cooke took over at the beginning of October and plan to stay the course at the popular inn. (Evan Houk photo)

“Yep, in May, we went on a reconnaissance mission,” Liz said with a laugh.

After they told the former owner, Julie Bolthuis, that they were interested in purchasing the inn, they made an offer within 48 hours.

“We loved the area,” Liz said.

Bolthuis, who ran the Newcastle Inn by herself for over 13 years, trained the two on the workings of the inn and is still available for any questions.

“She’s been so helpful,” Carolyn said.

The Newcastle Inn has mostly stayed open year-round, but the Cookes said they may take a break in mid-February through March to take a vacation, visit family, and perform some upgrades around the property.

Bolthuis said during a phone interview that she performed extensive renovations to the property during her 13 years as owner and operator. She learned the business by staying at bed and breakfasts, eventually working for five-and-a-half years at the 1811 House in Manchester, Vt.

After a trip to Maine for a long weekend in 2007, Bolthuis realized this is where she wanted to be.

“That really solidified things, wanting to be in Maine and the coast,” Bolthuis said.

She purchased the inn in May 2008 and immediately began upgrading it, converting from oil to propane for the heating system; replacing sections of the roof; new propane lines; converting the radiators from steam to hot water; and little-by-little, began to update and renovate all the rooms.

Bolthuis said she decided to put the Newcastle Inn up for sale at the end of the 2019 season.

“It just felt the time was right,” she said.

She said the past year has been the busiest ever at the inn, as people look for refuge from cities and the COVID-19 pandemic.

“It’s a house, has a home-like feeling, every guest room is uniquely decorated,” Bolthuis said.

The Newcastle Inn was originally a three-story sea captain’s house built in 1860, according to The Lincoln County News archives.

“Opened in 1911, the Newcastle Inn features 15 comfortable rooms, which can rent for $150 per night and more. Room features can include a Jacuzzi, a four-poster bed, a fireplace, and a spectacular view overlooking the Damariscotta River,” an article from Sept. 18, 2003, says.