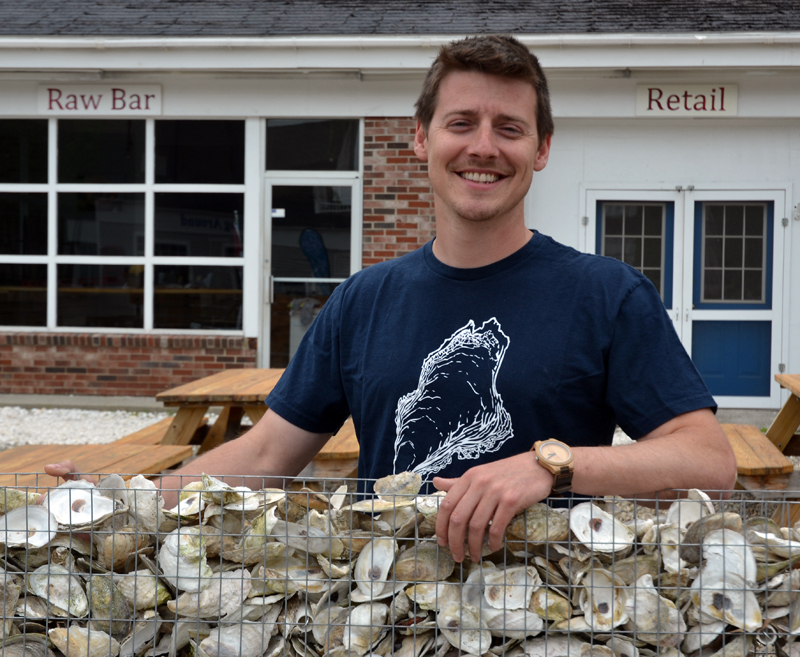 Parsons spent the most of last year renovating the former gas station at 68 Main St. into a distribution center, raw bar, and retail shop with the blessing of landlord Rob Nelson. In March 2017, Parsons opened Damariscotta River Distribution, where he cleans and sorts oysters for delivery to Maine restaurants and his own oyster-selling food carts, which operate under the name BP’s Shuck Shack.

The renovations of the raw bar and retail shop, which Parsons dubbed River Bottom Raw Bar, took a little longer, delaying the opening of that portion of the business until August. The name of the business originates from the creation of the custom cement bar top, which, when wet, resembles the bottom of the river.

This year, however, Parsons plans to have a full season at the raw bar, although it will operate under the new name of Shuck Station. In addition to being easier to say than River Bottom Raw Bar, the new name helps “build brand identity” between the Newcastle location and BP’s Shuck Shack, Parsons said.

“From day one, I’ve always called this place ‘the station,’ so this is just us coming full circle,” Parsons said. “We’ve started with a shuck shack, and we have progressed slowly up to a station.”

Graham Walton, of Duck Puddle Graphic Design, created a new logo for the business that incorporates the name change. Parsons said he hopes to have a sign up soon.

Parsons and his crew have been hard at work renovating the space for this year. The indoor dining area and bar space has doubled, creating extra space for employees to shuck oysters in front of the customers.

The retail shop, which carries all oysters available at the raw bar, as well as plates, shucking knives, sauces, and other oyster necessities, has been moved into the distribution center.

Outside, Parsons expanded the patio space and enclosed it with a new fence that incorporates oyster shells. Parsons plans to offer some live music on the patio throughout the season.

The menu has also undergone some changes with the addition of fried oysters, a smoked fish plate, and a seaweed salad made with locally grown seaweed from Maine Sea Farms. Parsons said he plans to add more offerings later in the season.

Customers will also notice a new oyster farmer at the Shuck Station for 2018, as Parsons has started his own farm, Blackstone Point Oysters. The small farm is located in the “most northern growing area of the Damariscotta River” and the oysters are heavily influenced by the fresh water of Damariscotta Lake, Parsons said.

“This is our first year on the market, and we’re very excited to present these oysters,” Parsons said.

Mackenzie Arsenault, Parsons’ girlfriend who assists in running the Shuck Station, said, “I think it brings a lot of credibility to educating other people on oysters when you truly know how they’re farmed.”

Oyster education is one of the main focuses of the business, Parson said. As it did last year, the raw bar will offer a “taste the river” option, which consists of a frequently rotating menu to highlight different parts of the Damariscotta River.

Parsons said he also hopes to bring in oysters from outside the Damariscotta River to help customers compare the differences between oysters, however, he will remain solely focused on oysters grown in Maine.

With the opening of the distribution business and the raw bar, Parsons has created 14 jobs in Newcastle, a mix of full-time and seasonal employees. So far, there are eight part-time employees lined up to work at the raw bar this season, but Parsons and Arsenault said the business could use more help.

“We grew from the first year to the second year and we’re still looking to add more,” Arsenault said.

Parsons and Arsenault said the business is looking to hold more public events throughout the summer, including wine and sake tastings and collaborations with other local businesses. The space can also be rented out for private parties, Parsons said.