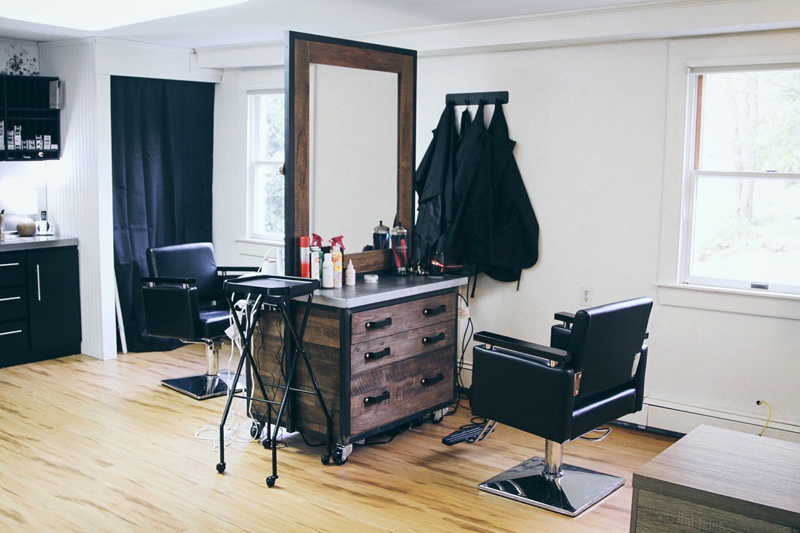 The owner of the former Aaron Michaels Salon in downtown Newcastle has returned to the village with the new B&Co. Hair Salon, in the Consigning Women building.

B&Co. Hair Salon, at 63 Main St., opened in mid-October. Britani Lavertu, a native of Newcastle, owns the new salon and has 15 years of experience in the industry.

Lavertu earned her certification as a hairdresser from the Capilo Institute, now the Aveda Institute, in 2003.

She worked in local salons and owned Aaron Michaels Salon, just a few doors down from her new location, for five years before moving to Portsmouth, N.H. with her husband. In 2016, they moved back to Newcastle.

Her mother, Terry Fairhurst, used to own Consigning Women, the shop next to the new salon, when it was in Damariscotta. Lavertu chose the location for her new business because her friends own the building and asked if she would like to lease the space. The Avantaggio family owns the building.

Lavertu always knew she wanted to own another salon, but did not expect to so quickly. The move “made sense,” she said.

“There are a lot of salons in town, but people seem to still need their hair cut,” she said.

Lavertu does not employ other hairdressers; instead, she rents booths to certified hairdressers. Lavertu provides the products they use for the customers.

Brooke Howard, of Bristol, rents a booth at B&Co. She is a graduate of the Aveda Institute and has about three years of experience.

“I wanted to have more freedom and independence, and start to specialize in things that interest me,” Howard said. Going out on her own has enabled her to fulfill those goals.

She called the rental “the next step” in her hairdressing career.

For Lavertu, there are perks when it comes to renting out booths, such as being able to choose your own schedule.

“I don’t really like to be a boss. I also feel like booth renting (allows) you to pay for your own profession in the long run and gives the girls more of a chance to run a place they want,” Lavertu said. “Everyone’s their own boss.”

Both hairdressers offer cuts for men, women, and children.

Other services include hair coloring, facial waxing, manicures, and pedicures. The price range varies for each service, Lavertu said.

Howard said she does regular and gel polish manicures and pedicures. However, she is focusing more on being a hairdresser, and enjoys doing haircuts for men.

“I feel like it’s a step up from your average hair color,” Lavertu said.

In the future, B&Co. Hair Salon will sell Davines and Verb products.

Hair coloring is Lavertu’s favorite part of her job. She said she can do all specialty hair-coloring techniques.

Howard and Lavertu participate in continuing education out of state. They took one class in Rhode Island recently and plan to attend another in New York early next year.

“That’s the fun part about being hairdressers, you travel and go to different classes,” Lavertu said.

B&Co. Hair Salon is an intimate space with crisp white walls, black furniture, and silver accents throughout the room. Lavertu refers to her salon as “fun and relaxing.”

Customers can have a cup of coffee during their appointment and watch Lavertu’s puppy, Parker, a Staffordshire-bull terrier mix, roam the shop.

“We try to keep it quiet and relaxing, and not overcrowded with a bunch of people,” Lavertu said. “It’s a small space, a great view, and good coffee.”

There is a maximum of four people in the salon at any time.

“And you can consignment shop after,” Lavertu said, referring to the business next door.

Lavertu said they will take walk-ins if they have time, or people can make an appointment a day or two in advance. Saturdays are by appointment only.