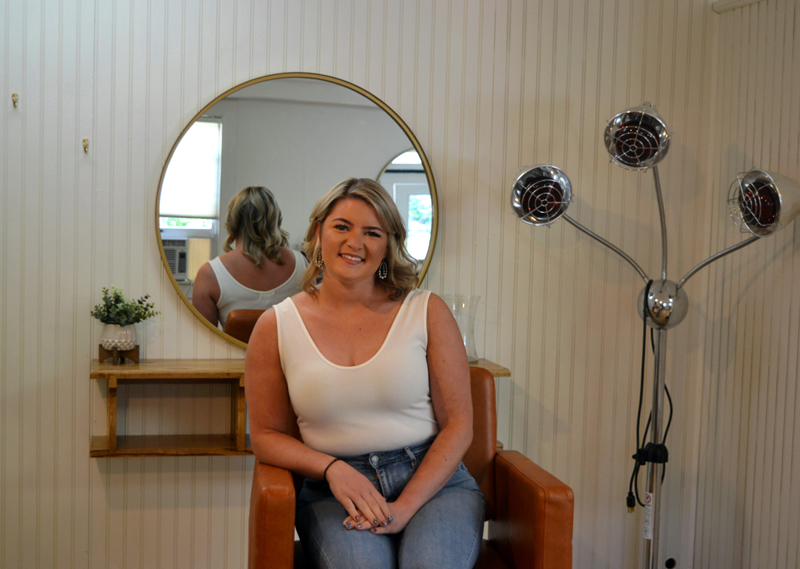 “It means creating an intimate and uplifting space where the client can connect with their stylist,” Schweighauser said.

Schweighauser discovered her passion for hair at 5 years old. Since then, she has tirelessly worked toward owning her own salon, a goal she achieved on June 3 when she opened Salty Bliss Hair Salon at 63 Main St. in Newcastle.

“There’s never been a more empowering feeling than unlocking the doors to my own salon,” Schweighauser said. “Hair has a way of following me everywhere I go.”

Schweighauser grew up in a foster home and attended 16 different schools across North Carolina, Massachusetts, and Maine before earning her license in cosmetology.

“I can’t count the number of times hairdressing has pulled me out of difficult situations and pushed me to stay on track,” Schweighauser said.

During her senior year of high school at Oceanside High School, Schweighauser enrolled in a course at Mid-Coast School of Technology to become a certified nursing assistant. She was eager to step into the workforce and assist people hands on.

While working full time on the memory care unit at Chase Point Assisted Living in Damariscotta, residents would ask Schweighauser to cut and style their hair for holidays, events, and weddings. She said she wanted the residents to feel taken care of, not just in preserving their memory, but their quality of life and self expression.

That same year, Schweighauser went on to earn her cosmetology license from the Capilo Institute in Augusta. She transitioned to working part time at Jennifer’s Family Hair Care in Jefferson while working per diem at Chase Point and part time in the medical surgical unit at LincolnHealth.

In October 2018, when B&Co. Hair Salon first opened in the space next to Consigning Women in Newcastle, Schweighauser started renting a booth part time while also working full time in the intensive care unit at LincolnHealth’s Miles Campus and per diem at Chase Point.

Schweighauser said that she fell in love with the intimacy of the salon space and started booth renting full time.

“Even in the hospital setting, I was pulled back to doing hair,” said Schweighauser, who provided haircuts to her coworkers in the emergency department. “It was a great way to break up the hospital shift and get to know my coworkers in a whole new light.”

In February, Schweighauser left B&Co. and opened her own lash studio in the space above Cosigning Women. She also started working full time at The Look Hair Salon in Waldoboro.

In March, when B&Co. moved out of the space in Newcastle and into the former Stable Gallery space in Damariscotta, Schweighauser jumped on the opportunity to take over the vacant salon.

“It’s always been the perfect location for a salon,” Schweighauser said. “It’s personal and relaxing, and the client can look out on the Damariscotta River from their chair. It’s really the ideal coastal salon space.”

Schweighauser took over the space on June 1, and with the help of friends and family she flipped the salon in less than three days.

“We all grabbed paint brushes and brooms; we added a new wall and awning to the exterior; my grandfather built me a desk, and the ladies at Serenity Hair Salon gave me their old sink,” Schweighauser said. She also downsized the salon to two chairs and one bed.

In the intimate salon space, Schweighauser said that she wants people to feel comfortable opening up to her, both generally and specifically about domestic violence.

“I got out of an abusive marriage in 2019, and have since used social media as an outlet to share my experience, and offer education on domestic violence awareness,” Schweighauser said.

She currently has 111,500 followers on TikTok, a global video-sharing social media platform.

Her best friend, Chelsea Demby, who was named Miss Connecticut USA in 2020, also keeps Schweighauser up to date on the latest fashion and cosmetology trends, and even helped her create a promotional video for the salon.

Having been open for more than a month, Schweighauser hopes to find a booth renter to join her at Salty Bliss. After working 12-hour shifts in the hospital setting, Schweighauser found booth renting to be more flexible and self-driven, as, “You are your own boss,” she said.

Salty Bliss is open Monday through Saturday by appointment, but Schweighauser said that she’s willing to open early or stay late.

“If you’ve ever sat in a shampoo chair while someone massages your scalp, after a 12-hour hospital shift, you’ll understand why,” Schweighauser said.

Schweighauser said that she’ll continue to evolve her skills, but for now, she’s satisfied with owning her own salon.