There’s a resort down at the tip of Ocean Point in East Boothbay that most everyone in Lincoln County has probably at least heard of, if not visited. It has, after all, been there for 120 years.

Ocean Point Inn and Resort is about a 10-minute drive down Route 96 from the lights in front of Hannaford in Boothbay Harbor. Guests pass through the small village of East Boothbay, and, as they approach the inn, see one of the most beautiful spots along the coast of Maine: Ocean Point.

The present owners, David Dudley, Tony Krason, and Mark Sweetland, have worked at the inn, in one capacity or another, for 46 years. Fraternity brothers at the University of Maine at Orono in the early 1970s, they first went to Ocean Point in the summer of ’72 to look for work.

Dudley had been offered a job at the inn, assisting the owner with accounting and reservations. Krason and Sweetland, fresh out of college, went along for the ride. They were also offered jobs. 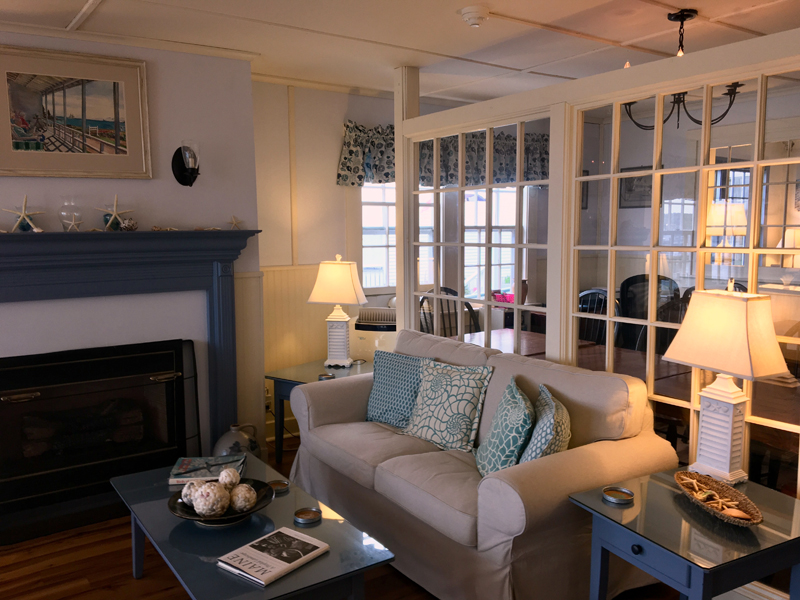 “I worked with the owner, Capt. Warren Barnes, learning about running the maintenance on the property,” Krason said. “Before coming here my goal was to go to graduate school and become a history professor, or go to law school. My mother was furious when I came down here, especially when the Barneses offered me a year-round position working in Winchester, Mass. in the winters.”

Founded in 1898 by Capt. Edward Burnham, Ocean Point Inn and Resort was originally called Capt. Burnham’s. When his son, Ralph Burnham, of Newcastle, took over the family business, the name was changed to Pleasant View House.

The business was sold to Warren and Mattie Barnes, from Winchester, Mass., in 1946, and renamed Ocean Point Motel, then Ocean Point Inn.

Warren Barnes, a one-time president of the American Hotel Association, was a well-known photographer in New York City, working with notable illustrators like Norman Rockwell and Matt Clark. 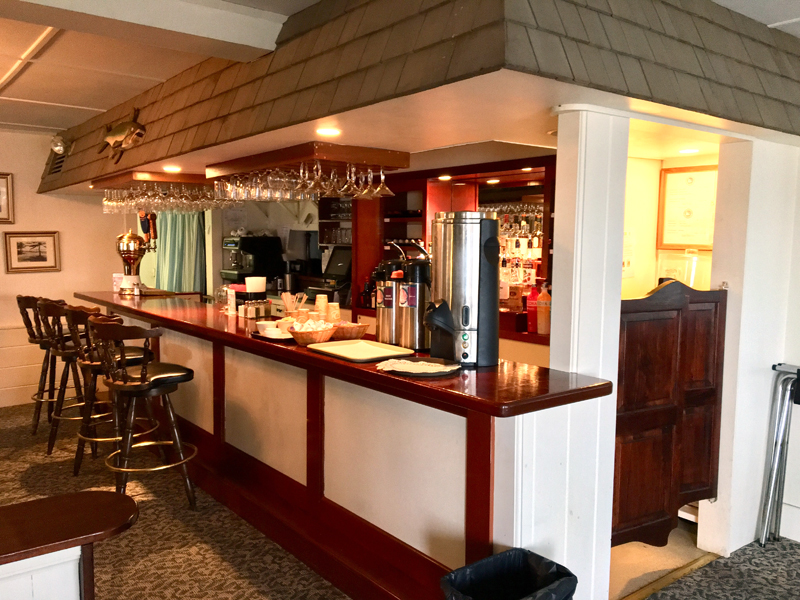 “Warren would gather models and actors together and photograph them, and Rockwell and Clark would use the photos to create paintings and illustrations and movie posters,” Krason said.

“He graduated from Colgate, where he was captain of the football team under the famous football coach Andy Kerr, at a time when they were undefeated and untied,” Krason said.

When the Barneses bought the resort, it included the “main house” and the “annex” next door. The restaurant was serving three meals per day. The business ran under the “American plan,” which included all meals.

During the 1950s, they made many improvements. The annex became the lodge, with new wrap-around porches and private bathrooms. Cottages were built and a larger dining room, living room, and lounge were added.

The main building had a small number of rooms in it and doubled as the post office and general store. The nearby Burnham farmhouse was added to the property and converted into two motel-like units. 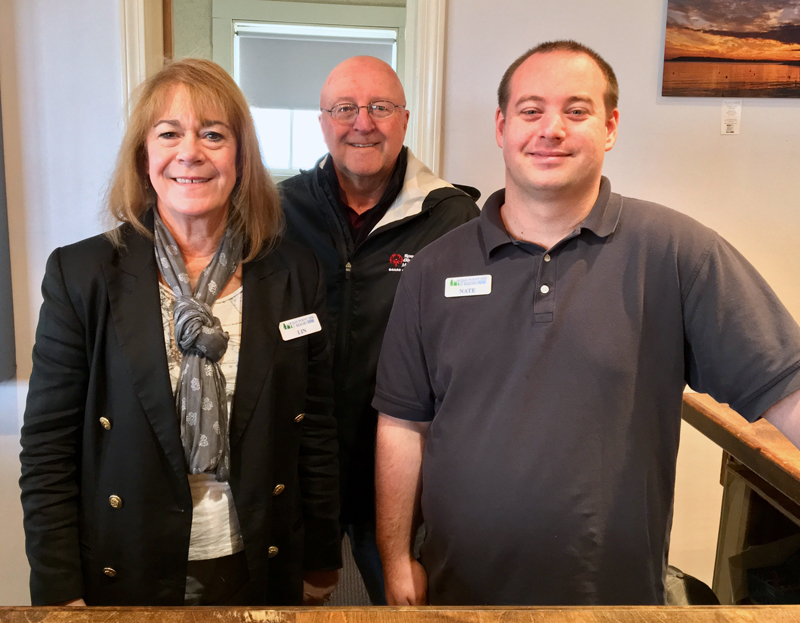 A brochure printed during that time read: “The rooms are large and airy, having an excellent view of the ocean and Linekin Bay. The house is fitted with bathrooms, toilets, and electric lights … The tables are spread with a large variety of first-class fare, plenty of milk, cream, fresh eggs, vegetables and berries in their season, also a large variety of fish, lobsters, and clams, strictly fresh from nearby waters …”

People lounged around and played cards – there were no TVs, cellphones, or internet. The inn hosted events, like Christmas in July, and guests stayed for weeks, even months. Room rates, including three meals a day, ran from $21-$25 per week.

During the ’70s and ’80s, rooms were enlarged and picture windows, porches, balconies, larger beds, and televisions were added. An outdoor heated pool, which the current owners say is still one of the largest in the area, was built.

Dudley, Krason, and Sweetland bought the inn from the Barneses in 1985.

Krason said other inns around Boothbay Harbor have been around for 120 years, but Ocean Point is the only one that has been open throughout all those years. 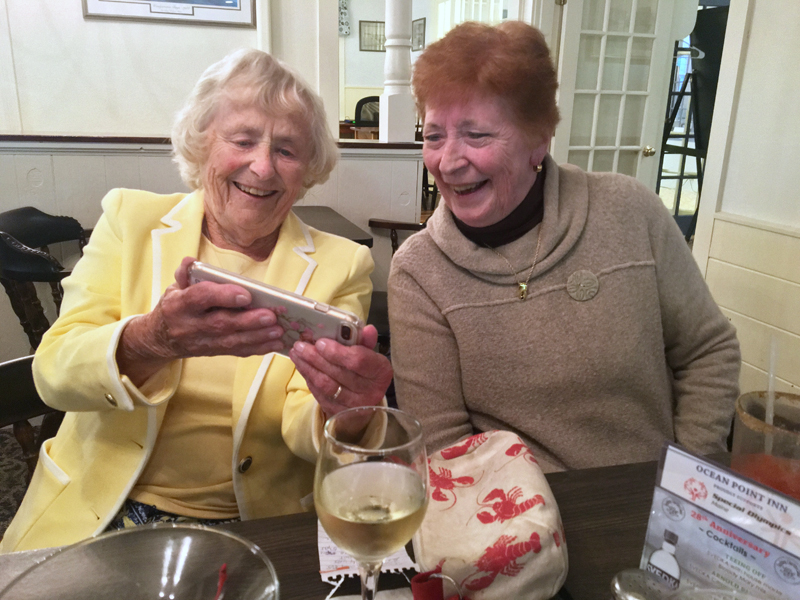 Jean Slayton (left) and Gail Ross have dinner at Ocean Point Inn on Sept. 28. Slayton was a waitress at the resort in 1946. (Suzi Thayer photo)

The resort now boasts 60 rooms in the main inn and 18 in other buildings, including cottages and motel rooms. At the height of the season, the inn employs 50 people, 28 of whom live on the property.

The dining room is open to the public for breakfast and dinner every day, and the resort is available for small functions.

Krason said the resort hosts many return guests. “Some have been coming for longer than I’ve been here, and it’s continuing down through generations. People came with their kids and now they’re coming with their grandkids.”

Krason likes to see new guests as well as return guests. “We know that any place can fill itself once, but we want new guests to join the very large group of former ones. We want them to enjoy their experience, and we take our reviews very seriously.”

“I guess we’re old school, but we really try to take good care of the customers,” he said.“We fit nicely in the community here,” he said. “We helped build the (community) pier, and the Ocean Pointers support us. Generations of Ocean Point families have worked here.” 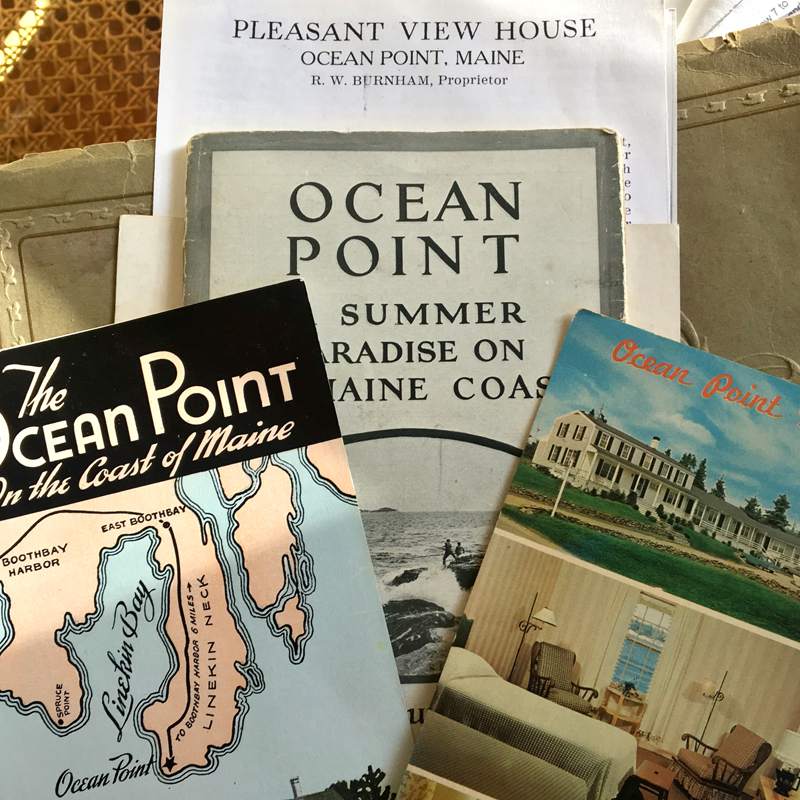 Ocean Point Inn flyers from over the years. The name of the inn was once Pleasant View House, as in the flyer at top.

Jean “Mimi” Slayton’s family has spent summers at Ocean Point for six generations. Her grandmother built the family cottage in 1923. Now 92, Slayton was a waitress at the resort in 1946, when the Barneses bought it. She comes in regularly for dinner with friends.

On Sept. 28 she was there having dinner with Gail Ross, another multigenerational Ocean Pointer, whose mother was a close friend of Slayton’s.

As the restaurant started filling up with diners, several came over to say hi to the two women. A couple at the next table, who Slayton and Ross had never met, started a conversation. They were going to be looking at the old cottage across the road the next day, with thoughts of possibly buying it.

It so happened that it had belonged to Slayton’s best friend, and by the time the couple left, a new friendship had been forged.

It’s that kind of place.