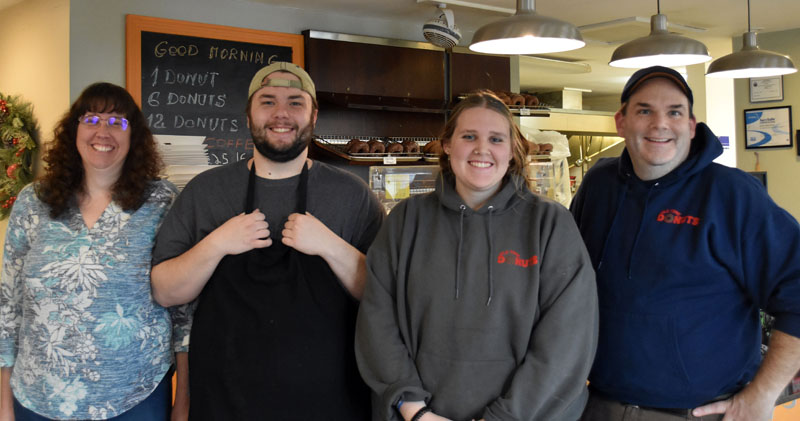 The Abruzese family, of Warren, stands in front of the counter at Old Time Donuts at 748 Main St. in Damariscotta. The family took over the business in July. From left: Candice, Jaden, Ashley, and Mark Abruzese. (Elizabeth Walztoni photo)

Mark Abruzese, of Warren, used to buy wholesale from Old Time Donuts in Damariscotta for his snack distribution company. Now, he owns and runs the donut business with his family.

“I always had it in the back of my mind as a nice little place,” Abruzese said.

One day in spring 2022, previous owner Andrew Rzycki asked if he knew anyone who would be interested in buying the shop.

By July, Abruzese and his two children, along with employee and honorary “Uncle Don” Deeton, were running it. His wife, Candice, who works up the road in payroll at the AOS 93 central office, helps out when she can.

The shop offers homemade old-fashioned cake donuts, with flavors including coconut, molasses, chocolate, classic, and others by chance, like maple walnut.

“It’s a very old school recipe, made from scratch here every day,” Abruzese said. “You can pronounce every ingredient.”

The Abruzeses did not have donut experience, but spent several weeks learning the recipes from Rzycki, who opened the shop with his son in 2018.

Each team member found their role. His adult son Jaden Abruzese is the donut cook, Mark does the decorating and finishing touches, and teenage daughter Ashley learned to make paczki, the Polish jelly-filled donut only available on Saturdays that was a specialty from the previous owner.

She also likes to bake, and her father said her cookies, muffins, and other goods appear from time to time at the counter.

“We want to encourage her,” Mark Abruzese said. “We tell her, if you make it, we’ll try and sell it.” 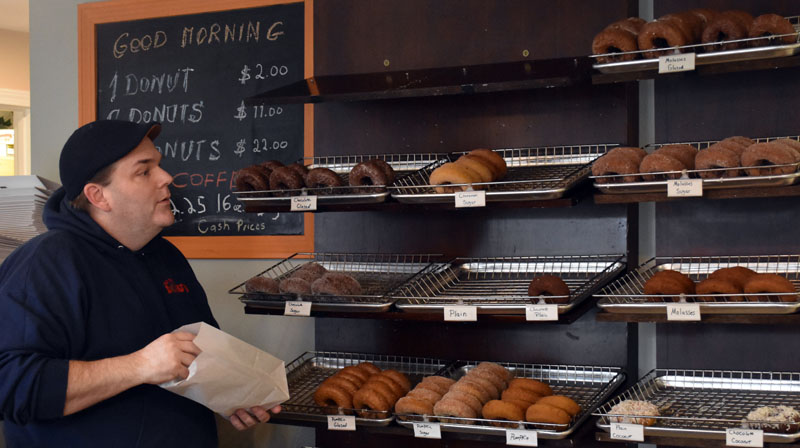 The team arrives at the store between midnight and 3 a.m., depending on order volume, to make 400 to 500 donuts on an average day.

All offerings are made fresh, and the Abruzeses won’t keep on the baked goods on the shelf for a second day — though it’s not unusual for them to sell out.

Along with quality, community connections are a priority for the business, Mark Abruzese said. The store carries hot Seacoast Coffee, of Wiscasset, and sells the Raider’s Sugarhouse maple syrup from South China, which they use in their maple donuts.

He said his favorite parts of owning Old Time Donuts involve community. He is happy to spend time with his children now that they work together, and they all enjoy hearing from customers.

One visitor wrote him to say that the pączki brought him back to his childhood in Poland; a couple that travels the East Coast sampling and ranking donut shops told him their product is in the top two.

“We’re not even six months in,” Candice Abruzese said. “That lets us know something’s going right.”

Closer to home, the couple said, the business has daily regulars. The wholesale side, to gas stations, convenience stores, and groceries, has “taken off,” according to Mark Abruzese, and he plans to expand those accounts in the new year. He also hopes to add new flavors and additional baked goods.

“I look forward to where we’re going,” he said.

Old Time Donuts at 748 Main St. is open Tuesday through Saturday from 6 a.m. to noon. For updates and information on available flavors, find the business on Facebook.