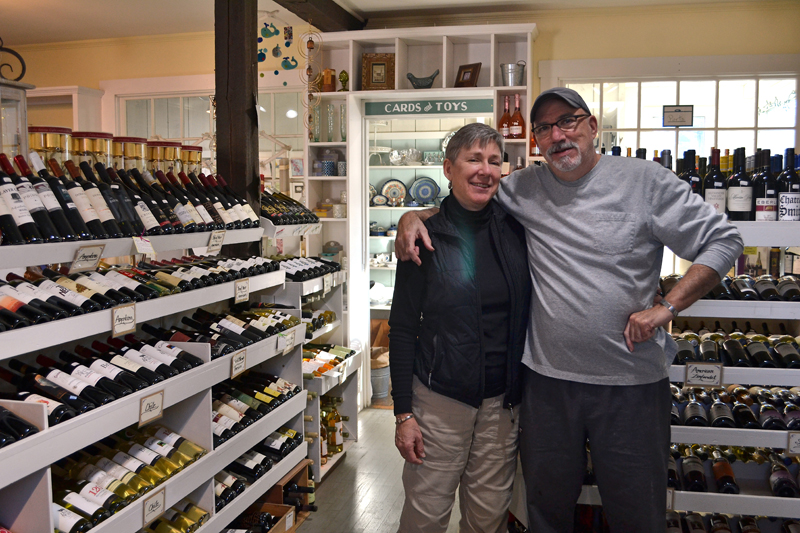 Weatherbird owners Debra and Scott Devlin stand in the specialty food store’s wine section. The Devlins recently purchased the food and kitchenware shop from Wayne and Joanne Moore, who will continue to own the clothing store on Main Street now known as W Boutique. (Maia Zewert photo)

The Weatherbird specialty food and kitchenware shop, at 72 Courtyard St. in Damariscotta, has been under new ownership since September.

Scott and Debra Devlin, of Damariscotta, purchased the business from Wayne and Joanne Moore. The Moores will continue to own the property and the Weatherbird clothing and accessory store on Main Street, which now operates under the name Wboutique.

“We enjoyed our time at the shop, and we will continue to operate the clothing store, but we’re looking forward to spending more time with family and traveling,” Joanne Moore said. “We’ve always been very thankful for the customers and their patronage, and we’re confident Scott and Debra will continue to maintain the Weatherbird legacy.”

The Moores will also continue working together, along with other members of their family, at their other business, Cabbage Island Clambakes in Boothbay Harbor, Joanne Moore said.

The Devlins owned and operated Salt Bay Cafe on Main Street in Damariscotta from 1989-1999. While the couple enjoyed being self-employed, they decided to sell the restaurant and see what was next.

Shortly after returning from a road trip, Debra Devlin began working for L.L. Bean. During her 12-year tenure with L.L. Bean, the company moved her to several locations around New England, including Ellsworth, Maine, and North Conway, N.H. At each new location, Scott Devlin found work at various businesses and food shops.

Eventually, “the appeal of moving every two or three years wore off,” Debra said. The Devlins decided to settle down and found a bed-and-breakfast for sale in Portland. They purchased the 140-year-old building in 2011.

Running the bed-and-breakfast, the West End Inn, differed slightly from the time the couple spent at Salt Bay Cafe, they said. Instead of the 18-hour days they experienced at the restaurant, the inn was a 24-hour commitment. 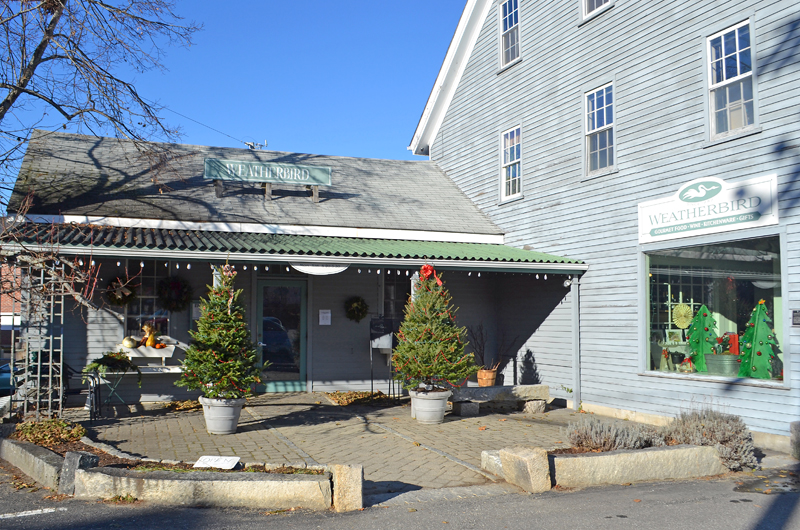 The entrance to Weatherbird at 72 Courtyard St. in Damariscotta. (Maia Zewert photo)

“And sometimes in between,” Scott added.

“You’re taking care of other people and their needs,” Debra said. “It was a much slower pace than the restaurant, but it was much more demanding in other ways.”

The inn was “a five-year project,” Scott said, and in April 2016 the Devlins decided it was again time to see what else was out there. By August 2016, an offer had been placed on the building. The sale was finalized Jan. 1.

“It was on the market for less than a year, which is pretty unheard of in that industry,” Debra said. “That’s partially why we were able to move back here.”

“We’re not quite ready to fully retire, not that this is retirement in any form,” Scott said.

While working at Whole Foods in Portland, Scott saw an advertisement for a specialty food store for sale in Damariscotta. Eager to return to the area, the Devlins decided to purchase Weatherbird and move back to the Twin Villages.

Since the purchase was finalized Sept. 1, the Devlins have made very few changes to the store. The employees who worked for the Moores agreed to stay on, which helped with the ownership transition.

“We’ve been hanging back on the fringes and just observing what’s been working well,” Scott said. “It’s a successful, thriving business, and there are reasons for that. We don’t want to just go in and make changes without realizing what makes this place successful.”

There have, however, been some behind-the-scenes changes. Items that had previously been purchased from a vendor, including holiday pies, are now made in-house by Scott. A menu of soups, each made from scratch, has also been added.

Most of the offerings and inventory remain, but customers might notice more local products on the shelves.

“Like everyone else, we’re trending more toward the locally sourced products,” Scott said. “It’s the big thing nowadays, going to what’s fresh and all-natural.”

So far the response from the community has been very positive, Debra said, with many former guests of Salt Bay Cafe expressing happiness to see the couple back in the area.

Scott and Debra have been married 40 years this month, and Weatherbird is the third business venture they have embarked on together, not including personal projects like renovating a home. The couple splits up responsibilities at the shop – Scott handles the food and wine while Debra focuses on customer service and marketing – but there is constant overlap between responsibilities.

“We like to work, we work a lot, but we work well together,” Scott said.

For more information about Weatherbird, find the business on Facebook or go to theweatherbird.com.