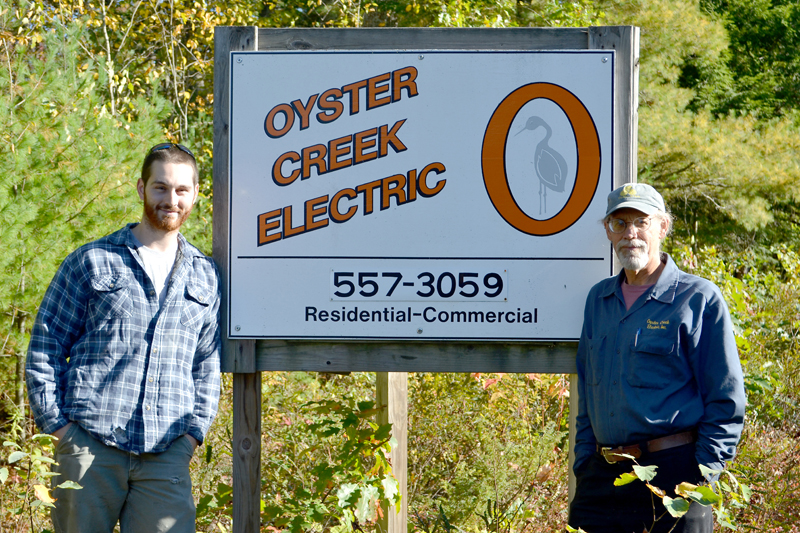 Daniel Baty (left) and Al Monaco stand in front of the sign for Oyster Creek Electric at 629 Bristol Road. Monaco is selling the business to Baty, his employee of four years. (Maia Zewert photo)

Bristol’s Oyster Creek Electric will soon be under new management, as owner and founder Al Monaco is selling the business to his employee of more than four years, Round Pond resident and 2014 Lincoln Academy graduate Daniel Baty.

Monaco, now of Alna, started Oyster Creek Electric in 1990, when he was living in Damariscotta. He purchased property in Bristol a few years later and moved the business to 629 Bristol Road, where it has been located ever since, offering everything from the rewiring of houses to the installation of both on- and off-grid solar-energy systems.

Over the nearly three-decade operation of Oyster Creek Electric, Monaco has hired a number of employees to work alongside him. For various reasons, many didn’t pan out.

“You could tell when they would start getting bored with it, and stop showing up on time before they stopped showing up at all,” Monaco said. “They were mostly young kids, so when Daniel first showed up, it was like, ‘Oh, here we go again.’”

Baty was in search of a job four years ago when his father, also named Daniel Baty, recommended working with Monaco. The elder Daniel Baty, the facilities site supervisor at LincolnHealth’s Miles Campus in Damariscotta, had worked with Monaco in the past.

“Al’s first reaction was ‘Well, we’ll try it,’ and I stuck with him,” the younger Baty said.

As a student at Lincoln Academy in Newcastle, Baty attended the Bath Regional Career and Technical Center for two years and gained knowledge of the field, he said. When he graduated from LA in 2014, he went on to Kennebec Valley Community College, where he earned an associate degree in electrical technology.

Baty is a licensed journeyman electrician, which means he can work on projects alone with general supervision from Monaco.

Among the important lessons Monaco has taught Baty over their four years of working together is “make sure to do it right the first time,” Baty said.

In the next year, Baty will have enough hours of field work to take the exam necessary to become a master electrician, completing a six-year training process.

As the two worked together, Monaco started considering selling the business to Baty when he was ready to retire.

“He shows up on time, for one,” Monaco said. “But he has an interest in it and the drive to continue. When you have the knowledge, the drive, and the ability to do it, that’s what matters.”

Baty’s positive interactions with customers also made him an ideal candidate to take over the business, Monaco said.

“Good customer service skills are crucial in the business, and Daniel knows that. He respects their homes when he’s doing the work, and he doesn’t leave until he’s met the customer’s needs,” Monaco said.

Monaco has not set a date for his departure from the business, but will slowly transition responsibilities to Baty over time.

“As we have it right now, it’s transitioned to the point where Daniel is doing all the work, and I’m just doing most of the selling,” Monaco said. “But I’m hoping we can start shifting that pretty soon here coming up.”

Monaco wanted to make sure he had the right person to pass his business on to before he retired and brought his nearly four-decade career as an electrician to a close.

“It was important to me that the business will continue on with or without me, and Daniel’s going to do that,” Monaco said.

Oyster Creek Electric’s hours of operation are from 8 a.m. to 4:30 p.m. Monday-Friday. Emergency service is available on nights and weekends. For more information, call 557-3059.