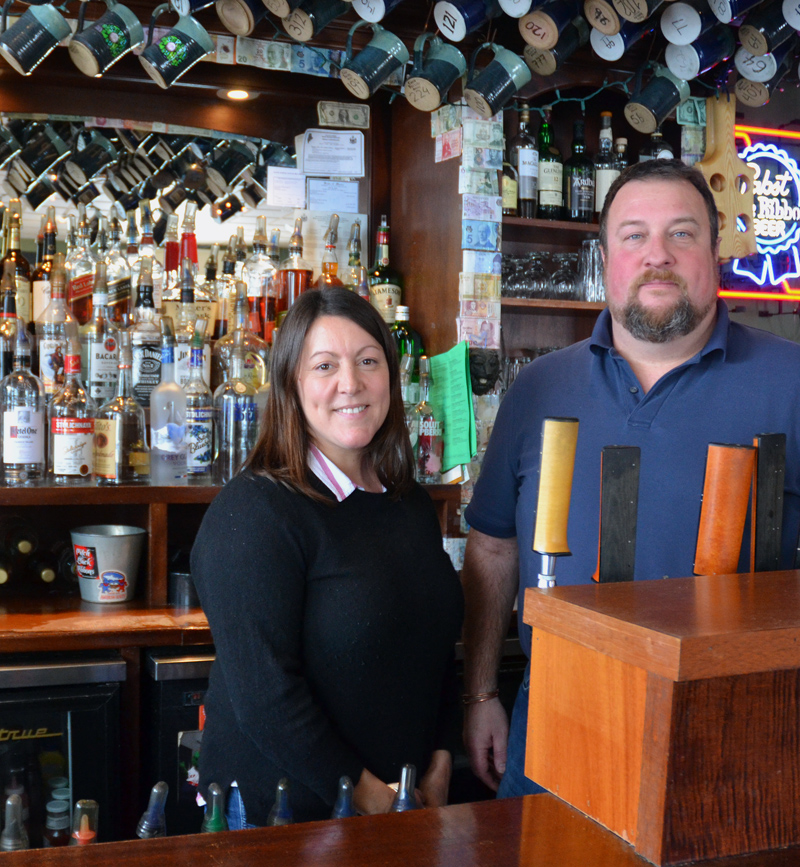 The owners of the Newcastle Publick House will launch a wood-fired pizzeria across the bridge in downtown Damariscotta this fall.

Alex and Rachel Nevens plan to open Oysterhead Pizza Co. at 189 Main St. in mid- to late September. The fast-casual restaurant will offer a variety of wood-fired pizzas, oysters, salads, and small plates.

“We’re excited to have a footprint on the other side of the bridge and be a part of this new energy developing in the downtown,” Alex said.

For almost 15 years, Nick Maragoudakis and Pat Dembkoski operated The Mediterranean Kitchen in the space. The restaurant closed March 31.

After learning The Mediterranean Kitchen was not renewing its lease, Alex and Rachel approached the landlord, Alex said.

The name Oysterhead Pizza Co. plays off that of the Oysterhead Lounge at the Newcastle Publick House, Alex said.

Customers will place orders at the counter and have the food brought out to them. The restaurant will seat approximately 30 people and will be open for lunch and dinner.

Oysterhead Pizza Co. plans to have pizza available by the slice during the day, Rachel said. Customers will also be able to place takeout orders.

Some items on the menu will be inspired by bits and pieces of pizza places Alex and Rachel enjoy, including a restaurant in Costa Rica that tops its pies with fresh ingredients. There will be a focus on using local and organic ingredients.

“We might have an Indian pizza with curry on it or a Mexican pizza with mole sauce,” Alex said. “We’re going to have fun with it.”

The restaurant will also offer multiple vegan options. The couple has two daughters who are vegan.

“We have some cool ideas about how to ramp that up and offer variety,” Alex said. “Vegan pizzas will not be an afterthought.”

Oysters and salads will also appear on the menu, however, sandwiches will not. The restaurant will also have draft beer, wine, and prosecco available.

Chef Nick Krunkkala, who has worked as a chef at Spruce Point Inn in Boothbay Harbor, will oversee the Oysterhead Pizza Co. and offer tapas specials on select nights. This summer, Krunkkala will be the chef at Coveside Restaurant and Marina in South Bristol, which Alex and Rachel also own.

Coveside will open for the season close to Memorial Day. Once the eatery goes “part-time” after Labor Day, Krunkkala will have time to plan the menu and specials for Oysterhead Pizza Co., Rachel said.

Once Oysterhead Pizza Co. opens in Damariscotta, the Newcastle Publick House will no longer have pizza on its menu, Alex said.

“Pizza tends to work better when it’s the focus instead of just something else on the menu,” Alex said. “It was something we added to the menu when we opened, but it ended up having more legs than we wanted.”

On the nights when the Oysterhead Lounge is open late, pizzas from Oysterhead Pizza Co. will be brought in for customers who want food after the kitchen closes.

“The goal is for the two places to be complimentary, not competing,” Alex said.

Oysterhead Pizza Co. will also share some staff with the Newcastle Publick House and Coveside and allow employees to pick up extra hours in the winter months.

“It’s really important to us that we don’t lay people off in the winter, so this will definitely help spread employees around and make sure everyone’s getting the hours they need,” Alex said.

The Way family owns the property and will make renovations to the building in preparation for their new tenant.

Pennington Way, manager for Way Vacation Rentals LLC, said they are happy for the Nevens family and their new restaurant.

More details about Oysterhead Pizza Co. will be posted on the Newcastle Publick House Facebook page as the new eatery gets closer to opening.