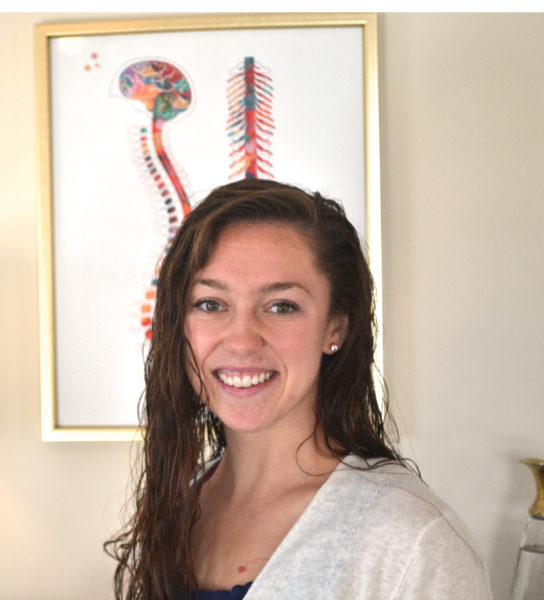 “Bird on a Perch” is one of 500 traditional exercises developed by Joe Pilates. The exercise focuses on building a foundation for taking flight, said Phaelon O’Donnell, which is why O’Donnell chose to name her recently opened Pilates studio, Perch Pilates, after it.

O’Donnell has been teaching individualized Pilates classes for more than a year through area studios. Ready to expand her practice and clientele, she began to search for a location to launch her own venture. She found 102 Main St. in her hometown of Wiscasset.

With the Wiscasset Board of Selectmen’s unanimous approval of her business license Nov. 15, O’Donnell is ready to instruct clients in an exercise she is passionate about at a studio of her own design.

Pilates, the set of exercises developed by Joe Pilates, were intended to benefit every unique body, O’Donnell said.

She personally experienced the benefits of Pilates after only a couple of classes, said O’Donnell, who is also a licensed massage therapist and holds a master’s degree in dance from Smith College.

After returning to Maine, O’Donnell was debating whether to pursue a career in dance performance or find a profession that would merge her interests in dance and health and wellness.

She was encouraged to try Pilates. “It made so much sense in my body,” O’Donnell said. “My base of support, alignment, posture, and overall focus” noticeably improved, she said.

She searched for a program to become a certified Pilates instructor and share the benefits she experienced with others. Through the Pilates Center of Colorado, which has a host school in Portland and specializes in classical Pilates instruction that remains true to the teachings of Joe Pilates, O’Donnell earned her certification.

The German-born Joe Pilates was a professional boxer in England at the outbreak of World War I, according to the Pilates Method Alliance, a professional association and certifying agency for Pilates teachers. 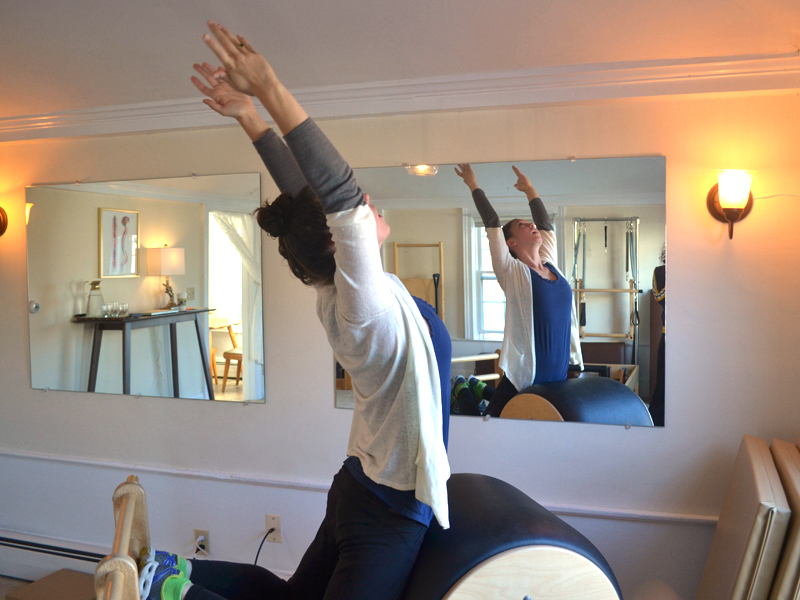 Phaelon O’Donnell demonstrates a Pilates exercise on a piece of equipment called the high barrel at her studio, Perch Pilates, in Wiscasset on Wednesday, Nov. 23. (Abigail Adams photo)

Like most Germans living in England, when the war began, Joe Pilates was placed in an internment camp. He devoted himself to teaching his fellow internees exercises based on his study of yoga, meditation, and Greek and Roman exercises, according to the Pilates Method Alliance.

Joe Pilates was transferred to another internment camp in England, where he became responsible for the health and well-being of sick and injured internees. Through rigging bed springs, he was able to create resistance that allowed the bedridden to exercise.

Through the exercise routine Joe Pilates developed, the health of the internees returned, according to the Pilates Method Alliance. The Reformer, one of the pieces of equipment created by Joe Pilates, was designed to resemble those beds, O’Donnell said.

Joe Pilates immigrated to the U.S. after the war and boxers, dancers, actors, and average citizens flocked to train with him.

“He was really ahead of his time,” O’Donnell said. “He worked with people from all walks of life. He was really interested in making Pilates accessible to everyone.”

The classical method of Pilates is very specific and the exercises are meant to be practiced in a certain sequence for maximum benefit, O’Donnell said.

Increased lung capacity, strength and flexibility, coordination, bone density, and joint health are among the physical benefits of Pilates, which spills into other areas of practitioners’ lives, according to the Pilates Method Alliance.

Joe Pilates “was convinced if people practiced what he came up with, the world would unite and come to peace,” O’Donnell said.

O’Donnell maintains the traditional exercises and sequences in her sessions with clients, with only minor variations, she said. While O’Donnell may add group “mat classes” in the future, her focus at the moment is on individualized Pilates instruction.

The one-to-one instruction enables O’Donnell to give increased attention to clients, help them achieve their personal goals, and make adjustments based on their individual needs, she said.

Through use of the Reformer, Cadillac, High Barrel, and Chair equipment developed by Joe Pilates to practice his exercises on, O’Donnell works with her clients to help them “make those incremental steps to better health,” she said.

Perch Pilates is located at 102 Main St. in Wiscasset. O’Donnell is currently accepting new clients and charges $55 per one-hour session.