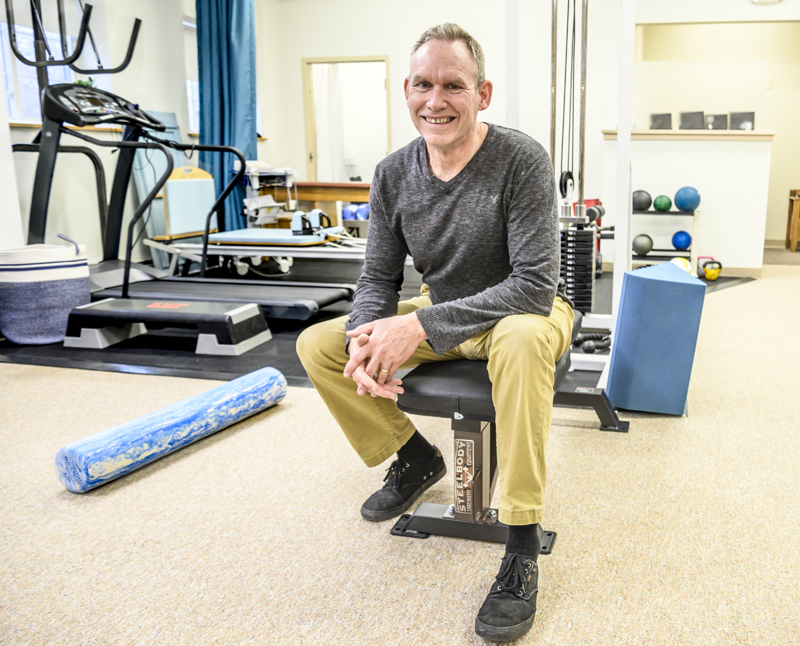 Physical therapist Glenn Flaming likes to cite the stages of learning to his clients. His goal is to move them through those stages until they achieve “unconscious competence.” The result can sometimes be a higher level of activity than even imagined. Life-changing improvement is possible.

According to Flaming, many people are unconsciously incompetent at the beginning of their health journey. They don’t know why their bodies are letting them down or how to improve.

With education they move to conscious incompetence. They learn where the issue lies, and they understand the reasons behind their pain or instability.

Putting what they have learned into practice leads to conscious competence. They are concentrating on moving correctly, and beginning to see results.

The end goal is unconscious competence – when the body knows the correct movement and performs it naturally.

Physical therapy is often prescribed to reduce pain and to retrain a body’s dysfunctional movement pattern in response to a disease state or injury. But physical therapy can also be used to address the decline in function that often comes with aging.

It can help people retain or regain their ability to perform basic activities of daily living. To get up from a chair, or even from the ground. To improve balance. To enjoy a walk outside.

Flaming’s approach to physical therapy is to treat everybody like an athlete. “Whether they’re trying to get out of a chair or doing a 300 pound squat, it’s the same function,” he said.

Back pain, shoulder pain, balance deficits, fear of falling – these are all issues that can be addressed by correcting alignment, expanding range of motion, and building strength, according to Flaming.

Loss of function doesn’t have to be irreversible. Movement training can help the body learn how to use every muscle and every joint to optimal advantage. And as new patterns are established the body can begin to self correct.

Flaming said it’s not uncommon for people to fall into poor movement patterns over the course of their lives. And it catches up to them at a certain age.

People who spend substantial time at a desk in a slumped posture become less capable of sitting erect. Legs may lose the strength needed to easily rise from that seated position. There comes a point where the lack of proper alignment and the lack of strength meet. When that happens, getting out of a chair may be impossible without assistance.

Physical therapy can reestablish innate movement functions. The right muscles start to kick in; strength can be gained quite quickly – not from an increase in muscle mass, but because for the first time in a long time muscles that haven’t been used are being put to work.

According to Flaming, an 80-year-old muscle will respond as well as a 50-year-old muscle, barring disease states. There are structural limitations because the machine is no longer working as a whole the way it did when a person was in their 20s or 30s, but it can still adapt.

“There is the capability of revitalization,” Flaming said. “That’s one thing older people need to recognize.” 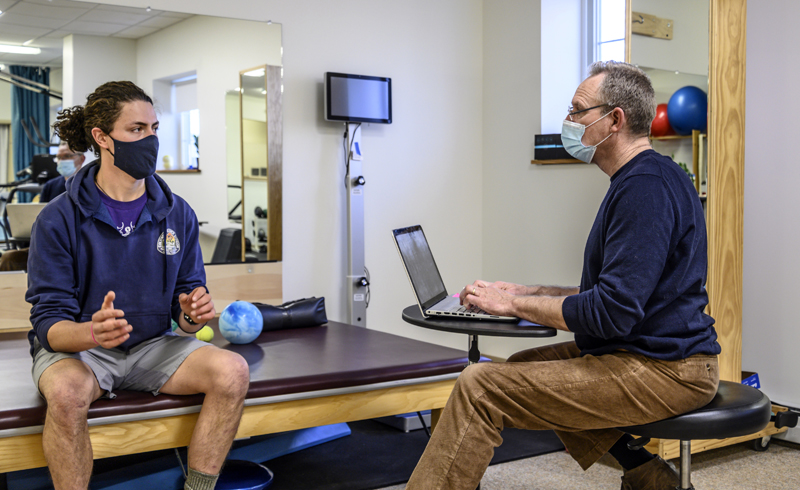 Physical therapist Glenn Flaming (right) takes a history from Logan Huntington at Flaming Physical Therapy in Damariscotta on Dec. 23. Huntington said he is seeking treatment for back pain from a fall while walking on ice. (Bisi Cameron Yee photo)

Flaming often centers goals for his clients around activities of daily living. “It’s something they are already doing,” he said. “They’re not having to learn something new.”

He has a list of simple activities that can make a difference in the body’s ongoing ability to function. When going from standing to sitting, take a moment and do it 10 times instead of once. Do 10 heel raises to strengthen calves while brushing your teeth. Take the stairs instead of the elevator. “Start with your daily life and go from there,” he said.

According to Flaming, the best exercise is whole-body exercise: walking, cycling, swimming. The more the exercise engages the whole body, the more encompassing the improvement.

Flaming also recommends focusing on attainable goals. Instead of trying to lose 20 pounds, try to just lose the five pounds gained over the holidays. Set a goal of 1,000 steps a day. Increase from there.

Accountability is another key to success. Walk with a friend. Or take a phone and ear pods and FaceTime them while walking. Share nature hikes on public forums like blogs or Facebook. Likes and kudos can up the motivation factor.

Flaming recommends starting slow and assessing how the body responds to a new exercise. If soreness goes away quickly, it’s an indication that the body may be capable of the work. Wait a day or two and give the muscles time to recuperate. Then go again.

The body will adapt over time and more exercise can be added. Flaming said increasing time or distance by 10-20% is a good rule of thumb.

According to Flaming, the body may feel stiff or tight at the beginning. That stiffness and the post-exercise soreness are normal responses. But immediate sharp pain is a red light.

“Don’t push through pain,” he said. It can be an indicator that the body isn’t ready for a particular pattern of movement.

Flaming said a good physical therapist will enable clients as opposed to creating a codependency.  Clients need to understand they have to put in the work on their own time too. It takes consistency. Proper movement and a focus on becoming more active need to become habits.

The cost of physical therapy can be a barrier, “but there is going to be a cost for anything that’s worthwhile,” Flaming said. Still, physical therapists can tailor programs in ways that contain costs. Reducing the number of visits, using time at the gym to practice correct form, supplementing therapy visits with video exercise programs are all strategies that can make physical therapy more affordable.

Flaming said it generally takes four to six sessions to fully assess clients who come in to treat pain or injuries. And sometimes up to 20 sessions to correct a problem. But for those who may be interested in addressing their body’s functionality, a onetime visit to evaluate balance and strength and to recommend a course of simple movements that can be followed at home may be helpful.

Flaming loves his job; it excites him to see someone who has capability unlock that capability during physical therapy.

“Your life is your athletic event,” he said. “Get back to what you do best.”

Flaming Physical Therapy is located at 64 Chapman St. in Damariscotta. For more information, call 563-7990 or go to flamingpt.com.