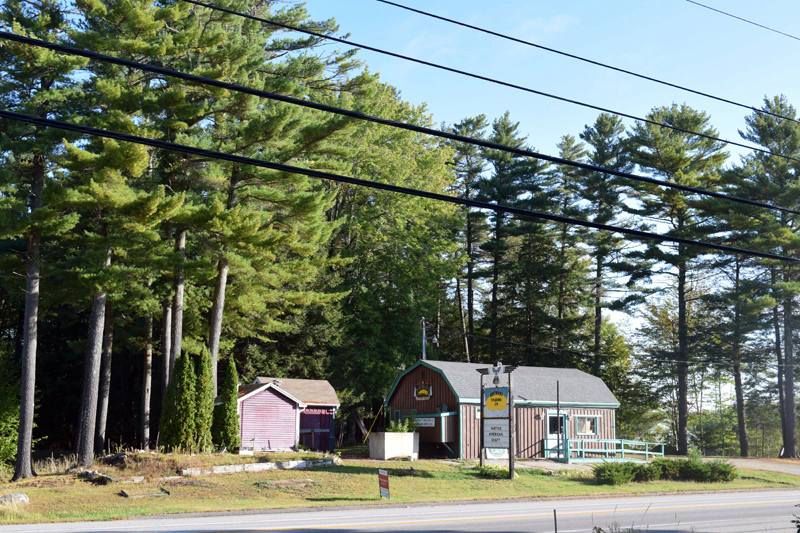 The Abenaki Trading Co. property at 48 Route 1 in Edgecomb remains on the market after a prospective buyer’s plan to build a restaurant at the site did not come to fruition. (Jessica Clifford photo, LCN file)

Plans for a seasonal eat-in and takeout restaurant on Route 1 in Edgecomb have fallen through.

Steve and Luanne Stinson presented their concept for a restaurant to the Edgecomb Planning Board on Sept. 19. They wanted to know their plan was viable before buying the property at 48 U.S. Route 1.

The Abenaki Trading Co., which sells Native American arts, crafts, and jewelry, is the current tenant of the property.

Property owner Ronna Lugosch, of Round Pond, who also owns the Peapod Jewelry shop and studio next door, said the sale fell through, but did not give specifics. The Stinsons could not be reached for comment.

The 2.2-acre property is listed for $155,000 by Newcastle Realty, Lugosch said. The real estate agent working with Lugosch declined to comment on the Stinsons’ reason for not going ahead with the purchase.

For a small business like Peapod Jewelry, the property carries a high tax bill, Lugosch said.

“I just finally made the decision that selling it would be the best answer,” she said.

The Stinsons planned to tear down the current building and build a new restaurant building, as well as a deck for outdoor seating.

The property had been used for a food shack for a number of years, Lugosch said.

“I guess I wasn’t completely surprised because there had been some history of it,” she said of the proposal to build a restaurant in the location.

Lugosch and her tenant shared their ideas of what might be best for the space.

“I would think retail would be really nice,” Lugosch said, adding that it would be a good fit with Peapod.

Jocelyn Howe, owner of Abenaki Trading Co., has had her store there since 2016. The business is continuing normal operations, Howe said. It closes from January to March every year.

“I still would like to stay and rent from someone,” Howe said. Later, she said she would continue to be a steward of the woods behind the building.

If the property sells and Howe has to leave, she said she would find somewhere else to sell her merchandise.

“I would never stop doing it because it is my passion and it’s what I’ve learned and these are the relationships I’ve built with the (Native Americans). They trust me,” Howe said. “I love doing it, so I would keep doing it and I would just keep looking for another spot.”

She would like to see the land remain as is because of its beauty. She said it is an ancient Native American fishing ground.

“It’s a beautiful piece of property. I would really think that somebody would want to come in and keep it a preserve,” Howe said.