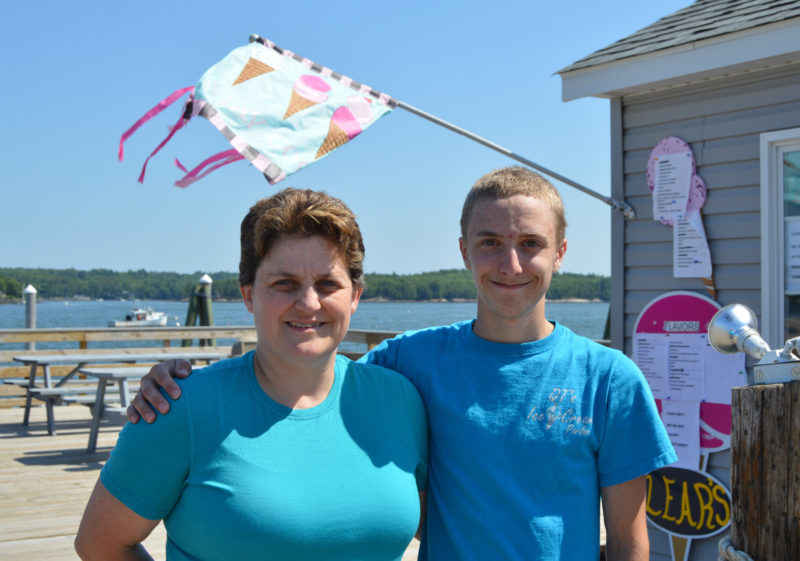 Anyone looking for Wiscasset’s famous lobster ice cream – and 25 other flavors of homemade ice cream – now needs to venture to the Waterfront Pier, as QT’s Ice Cream Parlor has moved to a new location at 2 Water St.

When QT’s previous location next to Red’s Eats was leased out to a new business, Cameron’s Pop Shoppe, QT’s owner Tammy Brooks considered opening a stand somewhere on the Creamery Pier. Ultimately, she and her husband Quintin decided to move to the other pier after talking with the town manager and selectmen about the Maine Department of Transportation’s plans for downtown Wiscasset.

“I love the view, even though it’s been a bit slower,” said Tammy Brooks. “Not many people get this office view.”

She said the biggest problem they are facing now is getting the word out about their new location.

“A lot of people even said they thought we were closed,” she said.

She said those who have found them have all seemed to like the new location better, though, especially as it is further away from busy Route 1.

“People can sit here and watch the sailboats,” she said.

Brooks and her family took over QT’s last year, when Ron and Pam Lear sold the business to them. The Lears continue to make the homemade ice cream. QT’s keeps a list of all ingredients used for the ice cream to assist with allergies and dietary concerns. Brooks said the Lears don’t put any non-essential ingredients in their ice cream.

“For instance, our mint chocolate chip ice cream is not green,” she said, adding that the Lears avoid color additives.

Keagan, the couple’s eldest son, 17, works at QT’s the most.

“I’m always here,” said Keagan. “It’s nice coming in and seeing the boats come in and out with the nice breeze.”

Keagan said their most popular flavor, or at least their most talked-about flavor, is their lobster ice cream. He said people either love it or hate it.

“It’s definitely different, that’s for sure,” he said.

Last year, QT’s sold 40 different ice cream flavors, but this year decided to cut back to 26 flavors to speed up the lines and decrease the amount of waste from unsold ice cream.

Adjustments like that are just one of many learning curves, Brooks said, but she has enjoyed learning the business with her family. She said she’s glad her sons, Keagan and Kyle, have the opportunity to learn customer service and business skills, while getting the chance to interact with visitors from all over the world.

“It’s always scary when you jump off a cliff and start something new,” she said.

QT’s Ice Cream Parlor is open from 1-9 p.m. every day until Columbus Day and is located on the Waterfront Pier by Le Garage and the Wiscasset Yacht Club.