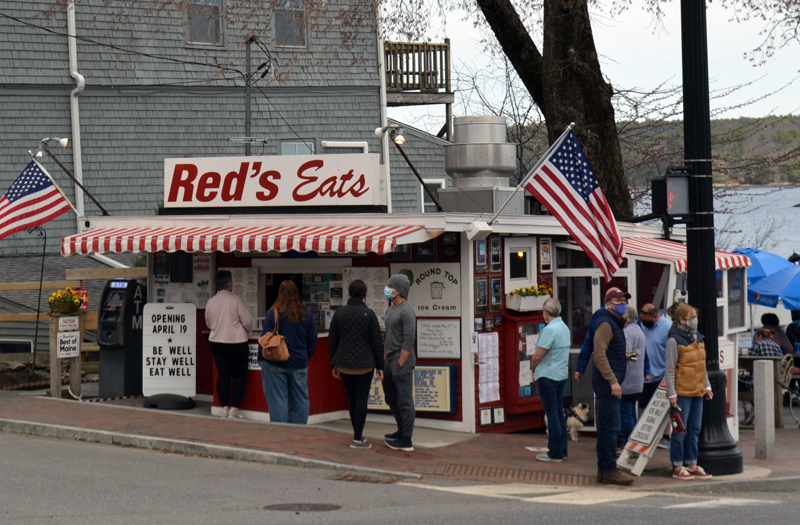 The Maine Lobstermens Association has teamed up with Reds Eats in Wiscasset to launch its 2022 Fall Fundraising Challenge. All contributions raised will go directly to the associations efforts to protect both the Maine lobster industry and the endangered North Atlantic right whale. (LCN file photo)

The Maine Lobstermen’s Association has teamed up with one of Maine’s most iconic lobster shacks, Red’s Eats in Wiscasset, to launch its fall fundraising challenge urging all businesses that rely on a strong lobster industry to contribute to the association’s Save Maine Lobstermen campaign.

All contributions raised will go directly to the Maine Lobstermen’s Association’s efforts to protect both the Maine lobster industry and the endangered North Atlantic right whale.

“There are so many restaurants, large and small, that serve delicious Maine lobster in many amazing ways, all because of the hardworking lobstermen and women who are out on the water, hauling traps, and supplying this healthy, sustainable product,” said Debbie Gagnon, general manager and co-owner of Red’s Eats. “I want to pay it forward and am delighted to be working to encourage others to help the MLA in its efforts to preserve Maine’s lobstering heritage for generations to come.”

The 2022 Fall Fundraising Challenge, which runs until Saturday, Oct. 1, encourages any person or business that relies on a strong lobster industry to donate at one of two levels:

Hard Shell Challenge: anyone who donates at least $2,500 will receive a special #SaveMaineLobstermen donor sweatshirt and a coupon for a dinner for two from Red’s Eats including two fresh Maine lobster rolls, one side dish (homemade onion rings, deep fried garden zucchini with ranch dressing or blue cheese sauce for dipping, or French fries) and two drinks.

The coupon must be used prior to Red’s Eats closing for the 2022 season.

Soft Shell Challenge: Anyone who donates at least $1,000 will receive a special #SaveMaineLobstermen donor sweatshirt.

“No one can imagine Maine without lobster,” said Kevin Kelley, director of advancement at the Maine Lobstermen’s Association. “It is the symbol of our state, and we are grateful to work with Red’s to encourage everyone who cares about the future of the industry to step up and help by contributing to MLA’s Save Maine Lobstermen campaign. It truly is an investment in the future of Maine’s economy

There are about 4,800 licensed lobstermen in Maine directly employing about 10,000 people. According to a 2018 Colby College study, Maine’s lobster fishery supply chain generates an additional $1 billion annually. Staggering as that figure is, it just begins to touch upon the real value of the fishery to the state.

Lobster directly infuses myriad sectors of Maine’s economy from real estate to hotels, restaurants, trucking companies, auto dealerships, and banks to name a few. Statistics from the Maine Office of Tourism shows an overwhelming majority of visitors come to Maine to enjoy food and culinary experiences and at least half say they are here to eat lobster.

However, the industry is threatened by a 10-year plan released last year by the National Marine Fisheries Service that is intended to help protect the endangered North Atlantic right whale.

In response to the plan, which the Maine Lobstermen’s Association contends won’t protect the whales, will decimate the lobster industry, and is based on an unrealistic, worse-case scenario, the association has launched a four-pronged plan to preserve the state’s fishing heritage.

For more information or to donate online, go to savemainelobstermen.org or mail checks payable to the Maine Lobstermen’s Association to 2 Storer St., Suite 203, Kennebunk, ME 04043.