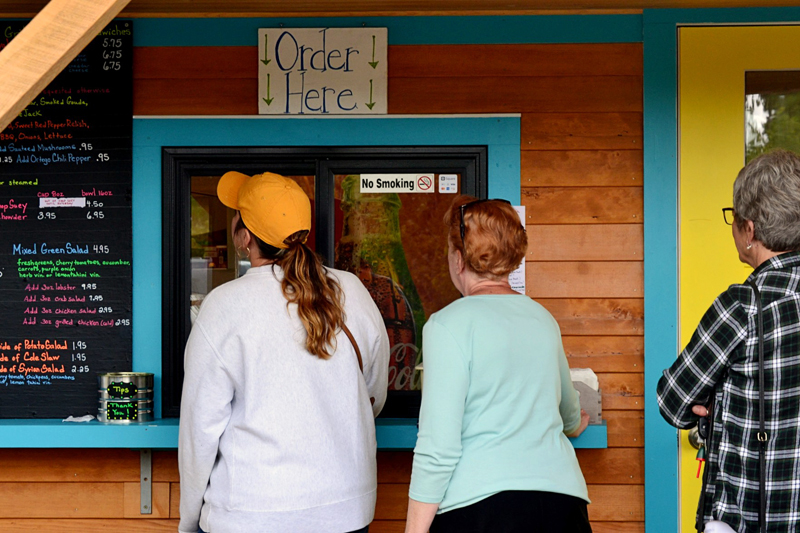 Customers line up to order at Larson’s Lunch Box on its first day of the season, Thursday, June 20. (Nettie Hoagland photo)

For many locals and visitors, a summer in Maine is not complete without an overstuffed lobster roll or a serving of American chop suey from Larson’s Lunch Box in Damariscotta. The walk-up eatery, which dates back to 1962, reopened Thursday, June 20, after an extensive renovation that will allow for a longer season.

An expansion of public sewer from School Street to Hannaford Supermarket last October facilitated the decision to lengthen the season, as their new connection does away with worries about lines freezing.

“At its core, the restaurant hasn’t changed much since the Larsons owned it,” Billy Ganem said.

Mary and Arthur Larson founded Larson’s Lunch Box in 1962, then passed the business on to their niece, Suzanne Carney. “They were always known for their lobster rolls,” Billy said. 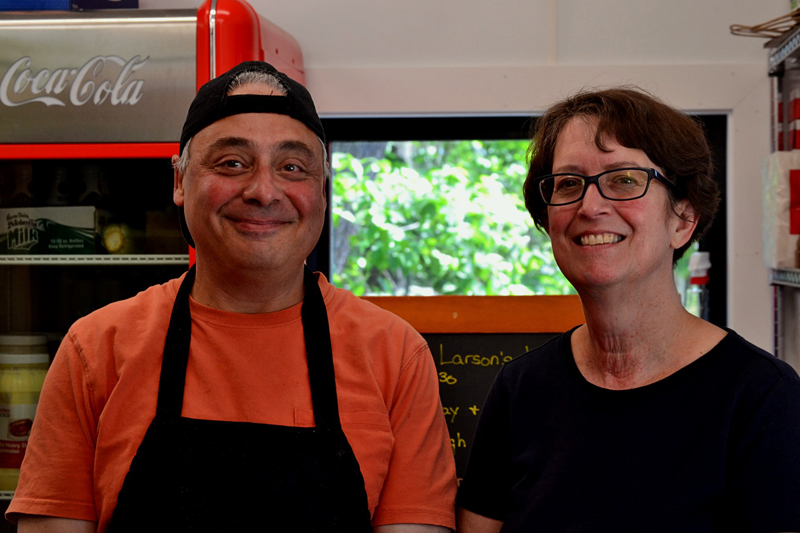 Larson’s Lunch Box proprietors Barb and Billy Ganem are celebrating their 14th season at the walk-up eatery. They recently completed an overhaul of the building. (Nettie Hoagland photo)

The Ganems stumbled upon Larson’s while vacationing in Damariscotta. “We immediately fell in love,” Billy said.

After that summer in Maine, the Ganems moved to Nevada with their son, Eli, then in second grade, only to return to Damariscotta five years later to purchase Larson’s. Billy said it was the best decision he ever made.

The Ganems said that over the years, they’ve built close friendships with their customers.

“We’ve met all of our friends right here at Larson’s,” Barb said. “It’s not just about serving the food.”

Nonetheless, working in the hot kitchen every day all summer comes with its challenges, Billy said. Before this year, Billy cooked and Barb took orders six days a week inside the elbow-to-elbow kitchen, which did not have air conditioning.

“You reach a burnout point if you do too much,” Billy said. The Ganems mulled over selling the business for several years, then decided to sell in 2015. The business did not sell, however, and they returned for another summer in 2016. 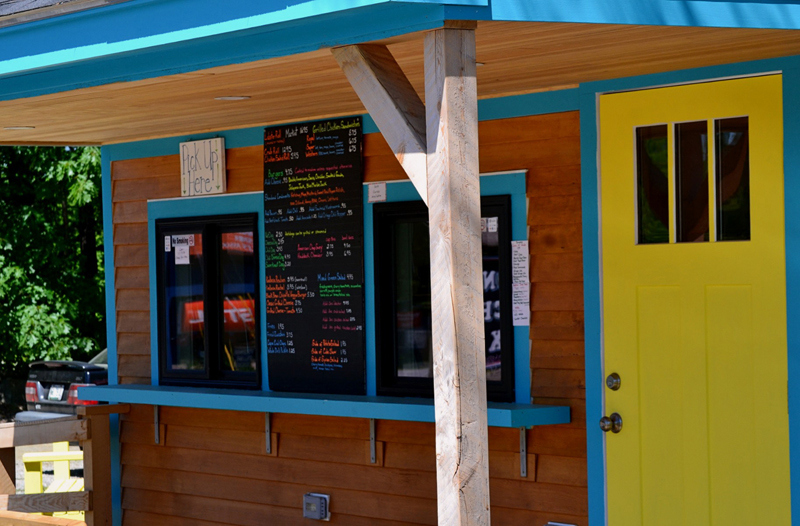 Now, with their season extending through November, the Ganems will close Larson’s on Sunday and Monday. They said the two days off will allow them to get ahead, but also to breathe in the hectic months of July and August.

“It was tough to manage a seasonal business. We had to sweat hard every day of the summer to make it work in the winter,” Billy said.

Staying open later will allow the Ganems to let go of their winter jobs in the kitchen at Bowdoin College. While they love working with the people at Bowdoin, the Ganems look forward to exploring more of the world and spending time with their son, who graduated from Boston University in May.

For now, from behind the counter, the Ganems look forward to serving customers with their smiling faces.

“We want to keep this landmark that we’ve inherited going,” Billy said.