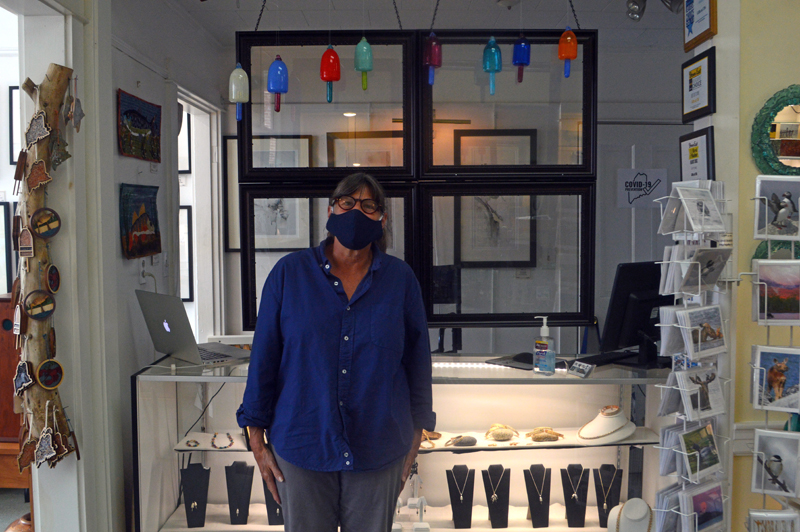 Gifts at 136 co-owner Martha Kalina in front of the counter at her shop in downtown Damariscotta. To keep herself and her customers safe, Kalina installed a Plexiglas barrier over the counter. (Alyce McFadden photo)

Up and down Damariscotta’s Main Street, the COVID-19 pandemic has slowed sales and changed the way many owners of restaurants and retail shops operate and engage with customers.

For coffee shop Cupacity and retailer Gifts at 136, there is one experience they share: uncertainty.

“We’ve had some really great days and some not-so-great days. We just take it day by day,” said Martha Kalina, who owns Gifts at 136 with her husband, Rick. “We don’t have a strategy. Our concern is: what is the winter going to be like? Nobody knows.”

Down the block, Cupacity owners Susan and Ted Murphy are also taking business in the pandemic one step at a time.

“This is one of the first times in my life I don’t know how to pivot,” Susan Murphy said. “I don’t have a plan.”

For Susan Murphy, Cupacity is about more than “baking the muffins and brewing the coffee.”

To keep their customers and staff safe, the Murphys are selling coffee and food for takeout only, Thursday through Saturday. Before, the cafe was a gathering place where customers could read, write, play board games, or just chat.

“This really put the kibosh on that,” Murphy said. “People would come in and talk to people. They would play the piano. So it was really different.”

To simulate some of that convivial atmosphere in the time of physical distancing, Ted and Susan Murphy have begun inviting community members, one by one, into the shop to tell a story on video.

“We had quite a cast of regulars. They could tell a yarn for sure,” Ted Murphy said. “This is an electronic way to create that sense of connection.”

Cupacity closed in mid-March. The Murphys laid off their staff and shut down their entire operation. The cafe reopened in June. Ted Murphy said they used the intervening months to “reinvest in our floor plan.” Part of this reinvestment came in the form of a new deck off the back of the building, complete with high-top tables with umbrellas where guests can linger and converse safely.

On weekends, the Murphys set up tables in the alley adjacent to the coffee shop. They share the space with their next-door neighbor, the Damariscotta River Grill.

Susan Murphy oversaw the installation of overhanging bistro lights in an effort to make the space a bit more hospitable to patrons. 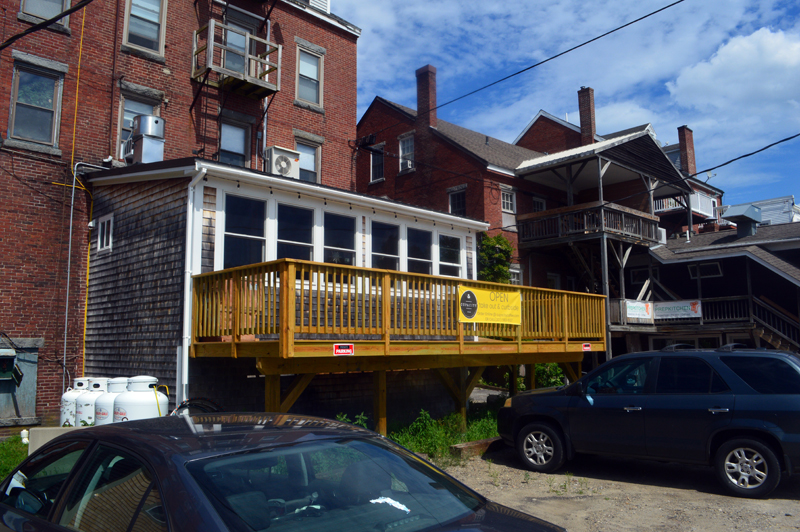 The new deck behind Cupacity offers customers a spot to sit and enjoy their coffee with a view of the Damariscotta River. (Alyce McFadden photo)

“I thought, ‘Let’s make it as funky out there as it is in here,’” Susan Murphy said.

The Murphys hope that by going the extra mile, they might recoup some of this season’s losses. Ted Murphy estimates that the cafe’s business is between 40% and 50% of what it was last year.

To make the changes they decided would be necessary to stay in business, the Murphys looked for help from grant programs.

“I think we applied for every grant we could find,” Ted Murphy said.

Over the past few weeks, Cupacity was able to rehire three employees on a part-time basis. Two are participating in Maine’s WorkShare unemployment program, which pays part-time workers some money if their employer can guarantee at least some regular employment.

The program aims to help employers bring back laid-off workers without shouldering a payroll burden they are unable to sustain.

“We are really leery about jerking people around with employment,” Ted Murphy said.

“The people who work for us are like family,” Susan Murphy added.

Gifts at 136 secured an Economic Injury Disaster Loan from the U.S. Small Business Administration. But, unlike Cupacity’s grants, the sum of the loan will eventually come due.

“It would get us through the next few years,” Kalina said, “but I don’t even know if I want to use it.”

Most of Kalina’s customers are visitors to the area, who might pop in to browse paintings of nearby landscapes or statues of local wildlife. The business model does not translate well to online retail, so Gifts at 136 relies on in-person sales and customers’ willingness to walk into the shop.

Susan Murphy agreed that the work has become harder. “Absolutely everything is more labor-intensive,” she said.

For Kalina, the decision to close for good or tough it out will come down to whether the business can sustain another year of rent payments.

“It has to be a business decision,” Kalina said. “We just haven’t decided yet.”

The pandemic has even changed how Kalina talks to customers and what kinds of things they buy.

“They’re just so thrilled to be here in this area,” Kalina said of her customers.  “I used to chat with people about where they were from while I wrapped things up, but now it’s kind of loaded.”

Cupacity barista Kayla White has noticed a change in her customers as well.

“A lot of people are much more happy just to interact with a new face,” White said of customers in recent months.

“It’s like they’re treating themselves,” Kalina said. “If they’re going to be home more, they want to look at beautiful things.”

All in all, Kalina describes business right now as “totally unpredictable.”

“Things are better than expected,” she said. “We set the bar really low, but we’re exceeding it.”