Parsons first appeared before the Newcastle Planning Board this spring to discuss his plans to transform the former gas station into a retail distribution center, raw bar, and retail shop. Parsons rents the building, which he refers to as The Station, from Rob Nelson.

In March, Parsons opened Damariscotta River Distribution, where he cleans and sorts oysters for delivery to restaurants across the state and to his own oyster-selling food carts, which operate under the name BP’s Shuck Shack. 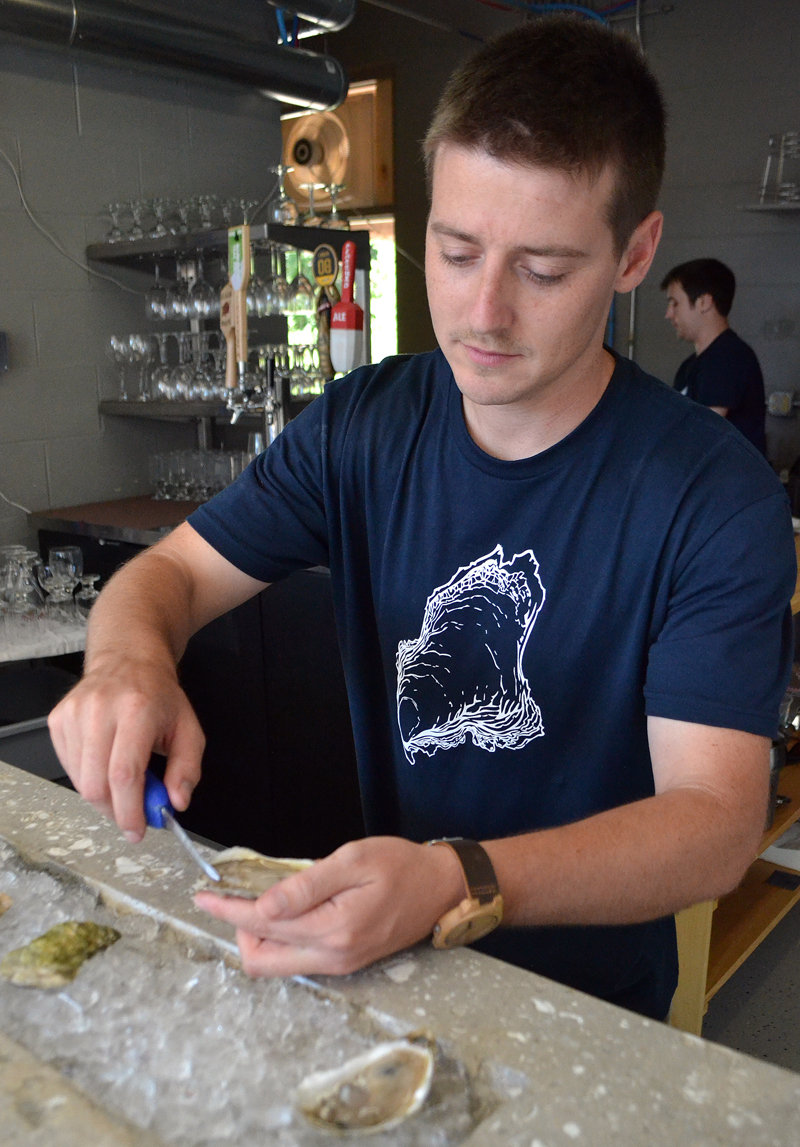 Parsons hoped to open the raw bar and retail shop in June, but a number of factors delayed the business’s debut. The building, a former gas station, needed renovations to support the needs of a restaurant. Parsons worked with local contractors and family and friends to complete the project, including his girlfriend, Mackenzie Arsenault, her father, Thom Shippee, and Newcastle resident Henry Gastaldo.

“Ideally, we had hoped to be open earlier in the summer, but we really wanted to have everything perfect for the customers before we opened to the public,” Parsons said.

The name of the raw bar comes from the creation of the custom cement bar top. While placing oyster shells into the wet cement, Parsons realized it resembled the bottom of the river.

Photographs of the seven oyster farmers of the Damariscotta River by local photographer Michael Austin Kane hang on a wall overlooking the raw bar. When explaining the differences between the oysters, bartender Joel Spinney will sometimes point to the photos to help customers identify which farmer grew the oysters they’re eating.

All of the employees at River Bottom Raw Bar have worked on oyster farms, but as part of their training, they will spend at least a day working with farmers on the Damariscotta River to get a better understanding of how the industry works, Parsons said.

“Our mission here is oyster education,” Parsons said. “There are people who only know whether they like oysters or if they don’t, and they don’t really know all the intricacies of the industry. We want to show them all the details, from how old the oysters are, the growing techniques the farmers use, anything that makes them unique.”

The menu is likely to change and expand in the future as River Bottom Raw Bar experiments with smoking oysters and adds other seafood options, Parsons said.

Next to the raw bar in River Bottom Retail, customers can purchase everything they need to shuck their own oysters at home.

Customers can purchase all the same oysters available in the raw bar, as well as Waldo Stone Farm sauces, wooden plates from Oyster River Joinery, and shucking knives featuring the business’s logo, an oyster shell in the shape of Maine designed by Graham Walton, of Duck Puddle Graphic Design. All products for sale are used at River Bottom Raw Bar, BP’s Shuck Shack, or both, Arsenault said. 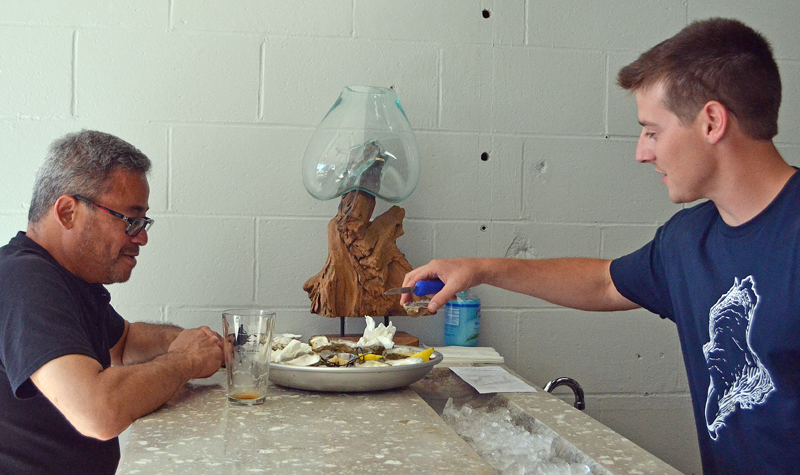 “I’ve been lucky enough to have a lot of support here, both from the community and from the farmers. I think everyone understands I’m trying to pay homage to the thriving aquaculture industry we have here,” Parsons said.

River Bottom Raw Bar will celebrate its grand opening from noon to 10 p.m., Saturday, Aug. 19. The raw bar’s hours of operation and schedule beyond the grand opening are to be determined, with plans to stay open in some capacity for most of the year, Arsenault said.

With River Bottom Raw Bar open, Damariscotta River Distribution delivering oysters around the state, and BP’s Shuck Shack running two carts in Portland, Parsons said he’s lucky to have the support of his parents, Regina Davey and Lee Parsons, as well as a “good, self-sufficient crew” in Portland led by the first employee he hired, Gregory Buffum.

“It’s all keeping me busy, but thankfully it’s all oysters, so it’s all related,” Parsons said.