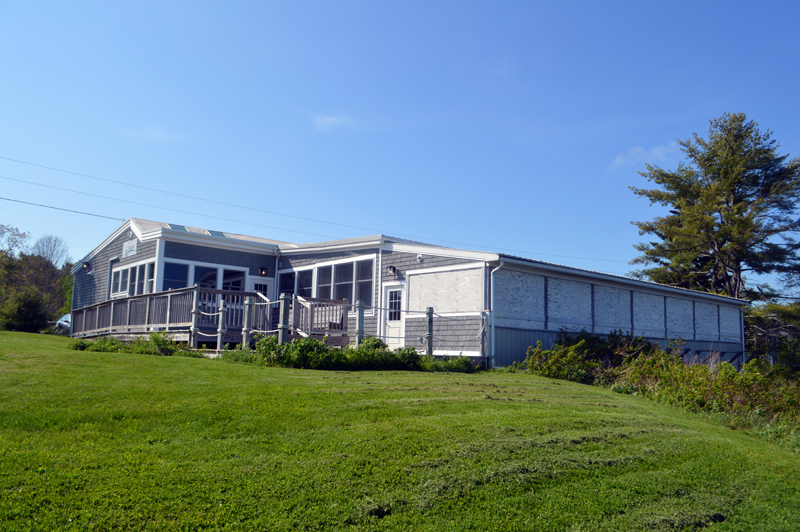 Plywood covers some windows at The Anchor, a seasonal restaurant in Round Pond. Andrea and Dan Reny will not open the restaurant this year, but their Muscongus Bay Lobster Co. opened May 23. (Alyce McFadden photo)

The Anchor, a seasonal restaurant in Round Pond, will not open this year due to concerns about COVID-19. The restaurant’s sister establishment, Muscongus Bay Lobster Co. – which has only outdoor seating – opened May 23.

Andrea Reny, who owns the two eateries with her husband, Dan Reny, said they chose not to open The Anchor to protect staff and customers, even though relaxed regulations on indoor dining in Maine took effect May 18.

“It’s too risky for us to open,” Andrea Reny said. “It’s indoor and we have a lot of guests that we consider our family and a big staff.”

The Renys made the decision to close just days before The Anchor was set to start serving customers for the season. They had already begun preparing the restaurant for opening day.

“We literally talked about it every night, like, ‘What should we do?’” Andrea Reny said. “Everyone’s lives have been kind of turned upside down” by the pandemic, she added.

Muscongus Bay Lobster, just feet away from The Anchor, serves customers outside, at picnic tables on a waterfront deck. This model, the Renys decided, would be safer and more comfortable for staff and customers alike.

Working around the clock, the Renys made adjustments to Muscongus Bay Lobster’s setup – like spacing out tables and adding Plexiglas to the ordering counter – to ensure everyone’s safety before reopening for Memorial Day weekend.

These precautions and the alfresco setting are precisely what drew Round Pond locals Ronna and Emile Lugosch to Muscongus Bay Lobster on Friday evening. 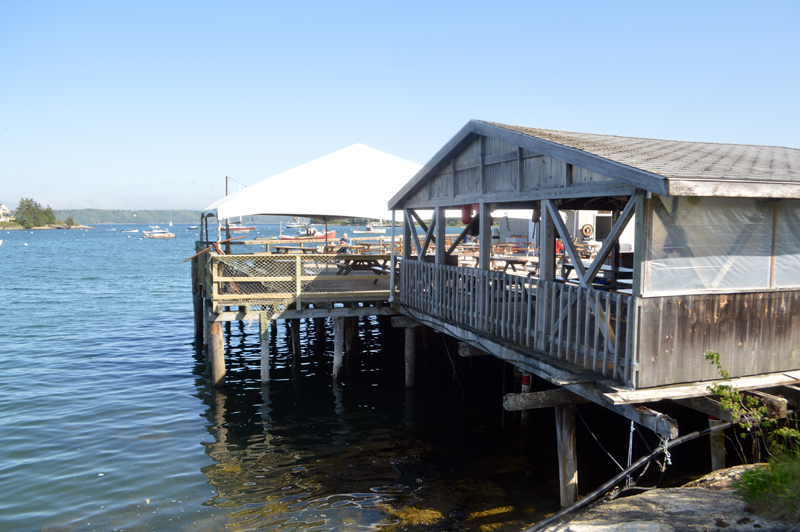 Muscongus Bay Lobster Co. in Round Pond is open Thursday-Sunday. Owners Andrea and Dan Reny own two restaurants next door to each other. They decided to open the outdoor restaurant, but close The Anchor, which has mostly indoor seating. (Alyce McFadden photo)

“This was an easy choice because it’s wide open, and we knew it would be safe,” Ronna Lugosch said.

Of The Anchor’s 12-person summer staff, about half have taken the Renys’ offer of alternate employment at Muscongus Bay Lobster. The remainder, according to Andrea Reny, decided to stay in their offseason jobs or seek employment elsewhere.

“Anyone who wanted to come down to Muscongus Bay Lobster will be incorporated in,” Andrea Reny said. “We’re kind of like a little family.”

The Renys’ restaurants were the beneficiaries of a loan through the second round of the federal Paycheck Protection Program, though Andrea Reny said the loan exceeds the sum she would need to pay her current staff.

The loans are calculated based on the size of a business’s staff at the same time last year. A delayed opening, an anemic start to the tourist season, and employees’ voluntary decisions not to come back for the summer add up to a big disparity between this May and last.

Even though the business won’t qualify for automatic forgiveness because the loan will help pay other expenses beyond staffing, the Renys are glad to have the extra liquidity.

Though The Anchor’s harbor-facing windows are boarded up, the Renys hope the building won’t sit idle this summer.

“We’re getting the kitchen up and running, just so it’s ready,” Andrea Reny said.

Though opening The Anchor’s dining room is out of the question for this year, the Renys are considering expanding Muscongus Bay Lobster’s menu to include dishes prepared in The Anchor’s kitchen, which has more complex appliances and a bigger capacity than its dockside counterpart.

“For example, we might use the fryolator up there and run stuff down,” Andrea Reny said.

These plans, like so much else, depend on how the tourist season shapes up in the coming months. Based on business over Memorial Day weekend, Andrea Reny is cautiously hopeful.

“People were really happy we were open, but the numbers just weren’t as high as previous years,” she said. “We’re thinking that by the end of June more people might be comfortable going out to eat.”