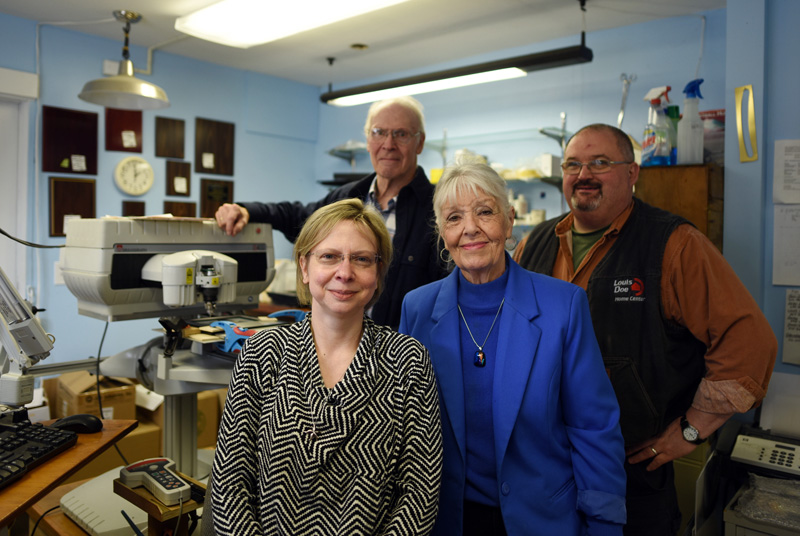 The current and soon-to-be owners of Emporium Engraving pose for a photo at the Newcastle business Friday, April 6. From left: Tara Doe, John and Ellie Day, and Mark Doe. (Jessica Picard photo)

The sale of Emporium Engraving in Newcastle will fulfill the owners’ wishes to keep the business local, as it will move only a short walk down Mills Road to Louis Doe Home Center.

Louis Doe Home Center will soon buy Emporium Engraving, which specializes in computer-assisted mechanical engraving, and move it from the corner of Academy Hill Road and Mills Road to the home center at 92 Mills Road.

Tara Doe will manage the engraving business. The sale will close April 30.

“We are sending out our baby to a new family,” Ellie Day said.

“It’s almost magical to see something that’s plain, and then you engrave it, and then it’s become someone else’s heirloom, their personalized gift that somebody is giving recognition, or love, to someone through an item,” Doe said.

An engraving room is being built in a storage area at Louis Doe’s, and the business will be moved to the new location by April 30, according to Doe.

The Days will stay at the current location until the end of May.

“We will be staying here for one month to sell any remaining merchandise,” Ellie Day said.

The 3 Academy Hill Road building is owned by Bob and Lynne Plourde, who also own Mail It 4 U next door. Once the engraving business moves out, the space will be available for rent, according to Bob Plourde.

John Day will visit the new location in the coming months to help Doe start her business, according to the Days.

“There are a whole array of items that we are hoping to be able to offer to people, even beyond the traditional engraveable gifts,” Doe said.

According to Doe, this includes items from the store’s flower shop, such as vases or gifts for weddings, tools, and IDs from the pet section.

Orders can be taken during Louis Doe’s store hours, even when Doe is not present. Appointments can also be made.

Doe’s hours of being in the shop will fluctuate, as she also works at the Lincoln County Communications Center.

Doe will also be doing online sales, and creating a Facebook page for the engraving business.

The Days originally owned a country gift shop called Days Emporium on Main Street, which they opened in 2001. The store offered engraving, but the work was contracted out.

“We realized that the engraving was becoming an important part of what we did … Being the middleman isn’t a very good place to be in a business that is very date-sensitive,” Ellie Day said.

John went to some engraving classes and “realized he had a knack for it … the rest is history,” Ellie Day said.

The Days moved their business to its current location in 2005 and changed the name in 2015.

“Think owning an engraving business could be in your future? It really could, because we’d like to retire,” Emporium Engraving’s website has read.

“We had kind of tossed around the idea when we first knew that it was for sale … Once I came down and started seeing it and being a part of it, then that really peaked my interest more,” Doe said.

When Doe showed interest in the engraving business, John began giving her lessons on how to use the equipment.

“It’s very exciting. There is so much to learn. It’s really satisfying and interesting to be able to create something special for someone,” Doe said.

“And she’s very good at it,” Ellie Day added.

Ellie Day could tell that John was impressed with Doe after their first engraving lesson.

“The first day Tara was here, John says, ‘Did you see her? I could tell she was fascinated!’ John doesn’t usually talk whimsically,” Ellie Day said.

“She knew her way around the screen. She understood immediately what was going on,” John Day said.

“John is a great teacher. The learning by doing versus just learning by watching has been a huge help,” Doe said.

The Days had met with others who were interested in buying the business, but many of them “didn’t have the excitement about doing it,” John Day said.

The Days’ customers have been supportive of the change in ownership.

“Every single person has said, ‘That is so great!’ … they are absolutely thrilled that it’s going to stay local and (that) people they know, who do a good job, will be taking it over,” Ellie Day said.

While ready to retire, the Days will miss the business that they have been building for the past 14 years.

“People are so happy that you will sit down and spend a little time with them and help them to express themselves … It can be very gratifying, and I will miss that,” Ellie Day said.

However, the Days are excited for the growth of the business.

“A local business is actually growing, which I think is real special. In a small town, to see a business that continues to grow and thrive is a wonderful thing,” Ellie Day said.

“I can’t tell you how excited and enthusiastic John and I are about the Does buying the business. To see something that we started flourish is going to be a real feeling of pride for us. And we are going to help them to succeed any way we can,” Ellie Day said.

“They’ve set the mark high,” Doe said. “John has a great reputation and great skill in what he does, so I have a lot to learn and a lot to live up to.”