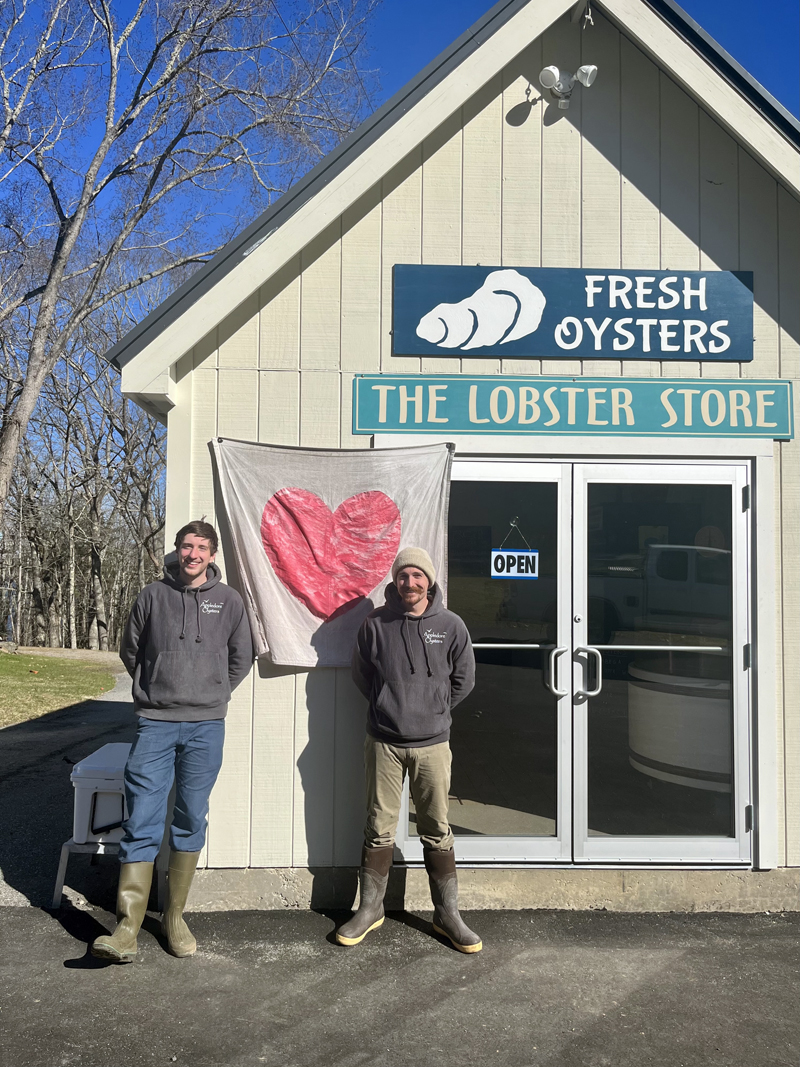 Under different business names, Scully has sold oysters since 1988. Most recently, she owned and operated her business under the name Scully’s Sea Products on River Road in Edgecomb since selling her first oyster farm, Glidden Point, in 2016.

But since late January, Scully’s Sea Products has been in Rogers’ and Jolie’s hands.

“The customers loved them, that became very clear last year. They’re very nice young people. They’re intelligent and polite, and they run a tight, clean ship,” said Scully. “They have similar principles to what I do.”

Rogers and Jolie purchased the business from Scully after a year of learning the ins and outs of the business under her guidance.

“We had a full year to sort of soak in as much of her wealth of knowledge as we could as we learned the ropes and got the hang of things,” said Rogers.

An open flag waved bright from the Scully’s Sea Products shop. Rogers and Jolie opened the shop on April 1 and plan to be open seven days a week until the end of December.

For now at least, they will keep the name.

“I was thoroughly comfortable with them keeping the name because I knew that I had seen them operate. And I knew how they were going to go about things,” said Scully.

The two business owners and new aquaculturists first met Scully through sourcing her oysters at their traveling raw bar – Jolie Rogers Raw Bar – which they founded in 2019.

Rogers and Jolie said they started getting more involved with her operation after “falling in love” with the quality of her oysters. The partnership culminated in last year’s “running it under her management” and “purchasing (the business) over the winter,” said Rogers.

The business may have changed hands, but Scully is still present as a mentor.

“Ryan comes to me with questions just about every day about this or that. And I think that’s a good thing,” said Scully. “I mean, even after having done it 35 years, sometimes something comes up that’s even surprising to me. It allows me to stay involved as much as they want to ask me questions, and I welcome that. I think that’s great.”

Plus, until they are up for renewal next year, the LPAs are still in her name.

“The LPAs that are here are still in my name for this year. And that’s part of what I’ll be mentoring them through the process of like growing seed and things of that sort,” said Scully. “But I fully anticipate that next year, instead of me renewing those LPAs, they will take them, you know, they’ll get them in their name.”

The raw bar focused on weddings and similar events, until the start of the pandemic when those big gatherings came “to a screeching halt,” as Jolie put it. So the two transitioned to a door-step model and did some pop-up events at breweries and distilleries along the way.

“When you’re working on a raw bar, you’re just as much of a storyteller as you are a shucker or a kitchen worker,” said Rogers. “So you learn a lot about the characteristics of every region and the farmers and what different farmers are doing and how that affects the flavor.”

“We did a lot of brewery pop ups and things to get started. And we still do some of that,” said Rogers. “It’s a great way to sort of get your brand and get your sea legs, I guess.”

Rogers, originally from Massachusetts, studied hospitality management and eco-gastronomy at the University of New Hampshire, where he also helped open up a raw bar.

“I just kind of couldn’t get away from the oysters since. I fell in love with the shucker position,” said Rogers.

Jolie, originally from Maine, also came to oysters from a background in culinary work, having been in restaurants for about 20 years prior to starting Jolie Rogers.

“I’ve always worked on the sea coast mainly,” said Jolie, who also worked one season on an oyster farm in Elliott. “And so the food that you’re dealing with is seafood.”

The shop and gear transferred to Jolie and Rogers through their purchase. Owning the shop and having access to the growing sites, “strengthens what we were doing on the raw bar because there’s even more control over our product and freshness and quality,” said Rogers.

The traveling raw bar hasn’t walked the plank – but their primary focus has shifted to the store and the oysters they grow.

“At the moment, we’re really trying to really focus on the retail shop and being more of a distributor,” said Jolie. “So getting a lot of product from other local farmers. And, you know, showing the community what they have, being a spot or a destination for tourists to kind of come and see what this river has to offer, as well as other Maine watersheds.”

“It’s quite amazing,” said Jolie. “I mean, the shop is just this little farm stand thing on the side of River Road, and the amount of people that show up here is crazy. It’s really amazing how much this place can crank.”

“We are always trying to find the highest quality oysters we can,” said Rogers. “We’re always looking to find people who have just exceptional oysters to work with, and tell their stories and just work with them, support them. Build up our community together.”

“We also source other farmers’ products at our shop,” said Jolie. “It’s not just specifically out of our raw bar.”

They buy steamers from a co-op and work with a lobsterman, whom they were connected with through Scully.

The two are as devoted to freshness and quality as they are to their new operation. For example, the steamers, as Rogers explained, are “pursed out in the Damariscotta River, in our wet storage rafts, which makes a huge difference.” The process cleans the clams, reducing grit for buyers.

Jolie and Rogers walked down to their docks, where a boat was tied off and the river calm just after high tide. They pointed out the wet storage rafts, where shellfish are kept submerged in river water after being harvested.

Looking out at the LPAs, marked with white buoys, Rogers reflected on a love for the river, observing its behavior, its moods, its beauty. And its role as a productive oyster habitat.

Jolie said the two have been taking classes through the Maine Sea Grant and the Maine Aquaculture Association, which has helped them connect with others in the industry – especially young people.

“We definitely meet a lot of young oyster farmers and different people. And it’s really exciting. To see so many young people energized by this just growing industry here in Maine,” said Jolie. He expressed gratitude and excitement about the younger generation of oyster farmers stepping into the industry – and respect for those who came before.

“The beauty of last year was getting to meet all of her customers and having Barb introducing us to the ones who have been here since day one for her, and kind of helping us to establish a connection with them before passing it over to us,” said Jolie.

“We’re hoping to continue the same relations and the same quality standards that she has provided them in the past.”