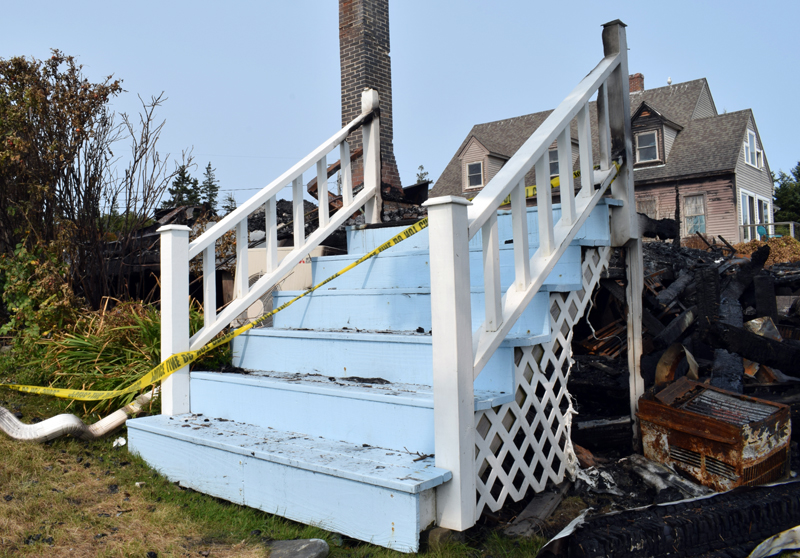 The staircase to the dining room of the Seagull Shop was one of the only things to survive the fire Wednesday, Sept. 9. Co-owner Tim Norland said the staircase was a favorite spot for parents to take pictures of their children throughout the years and he plans to incorporate it into the new building. (Evan Houk photo)

The owners of the Seagull Shop, the 83-year-old restaurant and gift shop at Pemaquid Point that burned last Wednesday, Sept. 9, hope to rebuild in time to open for the 2021 season.

Co-owners Tim and Betsey Norland and Brooke Cotter, in an interview next to the rubble Tuesday, Sept. 15, said they have received a tremendous outpouring of support and encouragement to rebuild.

Fundraising is underway. Tim Norland said there was insurance on the building but it will not cover the cost to rebuild, hence the need for fundraising.

On Sunday, Sept. 27, Seagull Shop staple Jud Caswell will perform outdoors at The Bradley Inn from 2-5 p.m. Tickets are available for $50 at seagullshopstore.com.

There will be a limit of 100 tickets for the event in order to adhere to limits on large gatherings.

Tim Norland said The Bradley Inn donated the use of its back lawn for the event.

A GoFundMe page was set up the day after the business burned by a longtime friend of Cotter’s, Seth Seaberg.

As of Sept. 16, 221 people have donated to the effort that has raised $20,548. The money will go toward paying all 25 employees of the Seagull Shop for five or six more weeks, through the remainder of the season, said Tim Norland. He said anything left over will go toward the rebuilding effort.

Betsey Norland expressed how much the outpouring of support has meant to her.

“Our neighbors, when they were asking what they can do and I sent them a link to the GoFundMe, they said their kids wanted to donate their allowance to the GoFundMe. To me, that really was very, very moving,” she said.

Kids especially loved the Seagull Shop, the Norlands said. Tim Norland said one of the only things to survive the fire was the blue staircase that led into the dining room, where parents would take their kids’ pictures, some every year they visited. 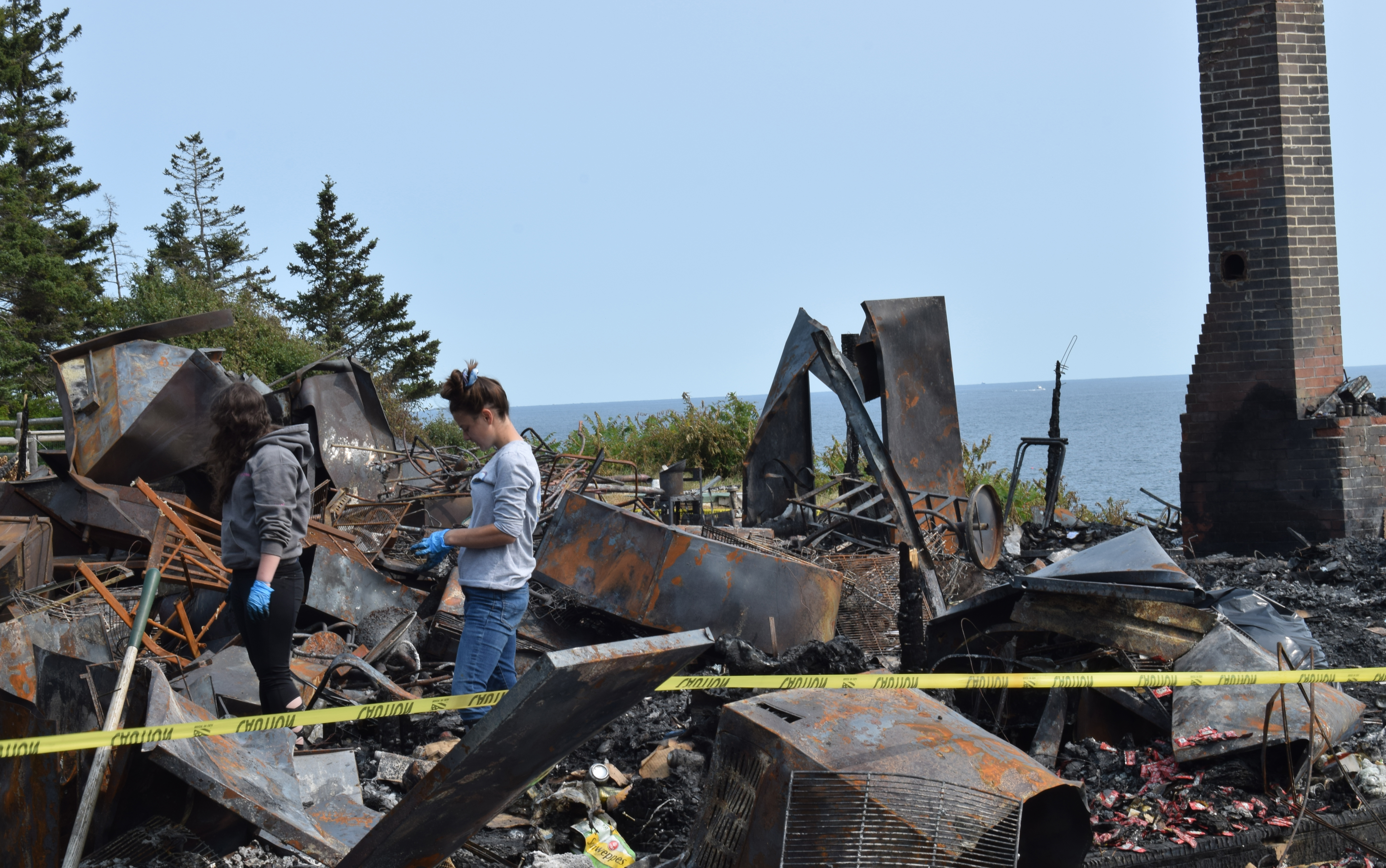 Employees of the Seagull Shop sift through the rubble Tuesday, Sept. 15. The owners plan to rebuild and hope to have the new shop ready for the 2021 tourist season. (Evan Houk photo)

He plans to incorporate that staircase into the new building somehow.

There were a few employees rummaging through the detritus from the fire on Tuesday, looking for anything that could be saved and maybe used in a memorial to the old shop.

Cotter described the Seagull Shop as a second home for her and many of the employees, which may explain the homey and cozy atmosphere described by so many of the shop’s patrons on social media after the fire. 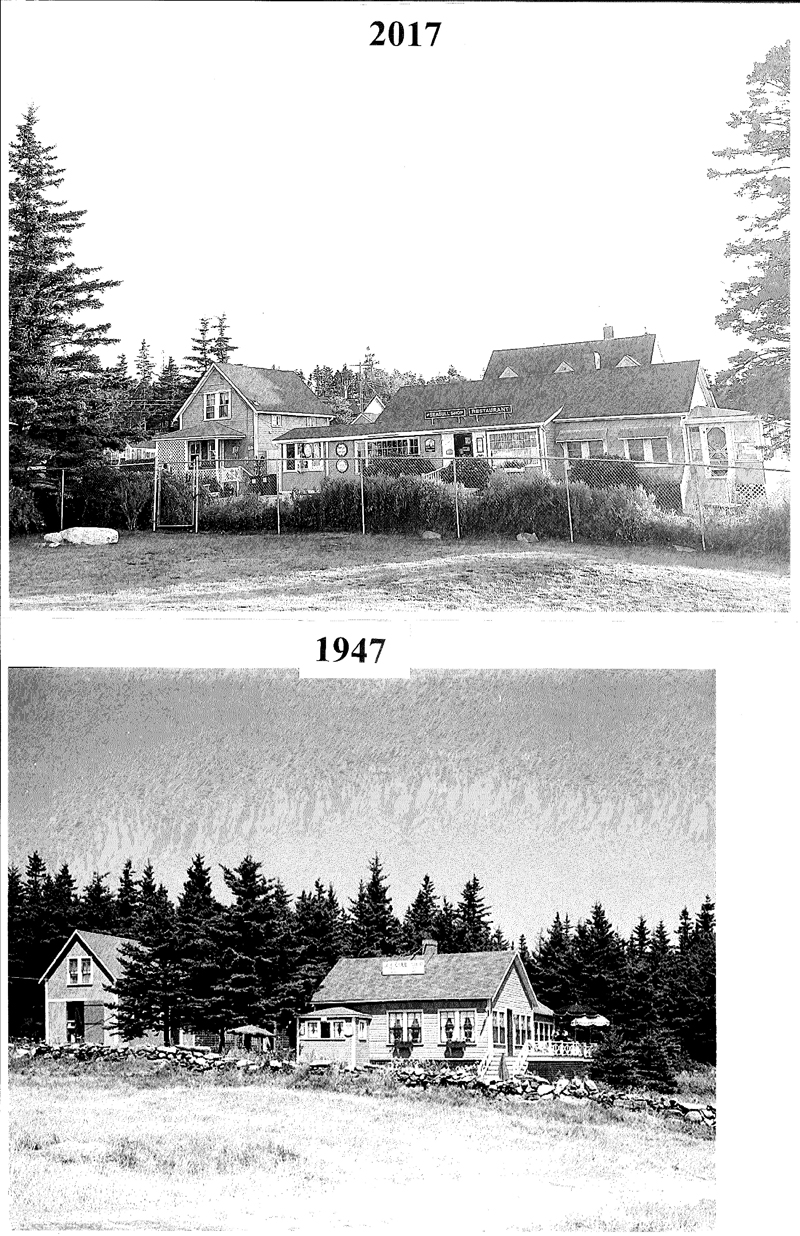 A comparison of the Sea Gull Tea Room in 1947 and the Seagull Shop in 2017. (Image courtesy Tim Norland)

“We still can’t even pull ourselves away. That’s another reason we’re digging through, not necessarily for souvenirs, but just to be close to it. It’s sort of a grieving process to slowly be able to let go of it and move on,” Cotter said.

Employees of the Seagull Shop have also organized bake sales, one of which will be held in the Seagull Shop parking lot on Saturday, Sept. 19 at 10 a.m. Cotter said anyone wishing to donate baked goods can do so after 9 a.m. Saturday.

The first bake sale was held last Saturday, Sept. 12 at 10 a.m. and sold out, Cotter said.

She said they are looking for a location in Damariscotta to hold another bake sale, for people who cannot make the trip down the peninsula.

Tim Norland said that within the next two weeks, he hopes to have a webcam set up on the house next door that will show the progress of the new construction.

“We want to keep it basically the same,” Cotter said of plans for the new Seagull Shop. “We want to bring back that same feel that everybody had before.”

The owners plan to include the long windows in the dining area overlooking the ocean, as well as the ice cream window.

Cotter gave a special shoutout to Joyce McCoy, who lives in the house next door that was damaged by the fire. “She had just redone that (house) and she is full of heartache as well,” Cotter said.

She said McCoy has been a huge supporter of the Seagull Shop, even donating money toward ingredients for the first bake sale.

Mark Eelman, the namesake of “Mark’s Famous Burrito” on the Seagull Shop menu, monitored the webcam that provided a 24/7 view from the shop. He has been a patron since 1997.

Like many others, Eelman expressed a love for the Seagull Shop’s famous blueberry pancakes.

On Tuesday, some unsuspecting visitors from Pennsylvania hoping for a bite to eat were shocked to see that the Seagull Shop was gone.

Ray and Lida Shetzline said for the past 10 or 12 years, they have always made it a point to visit the Seagull Shop whenever they were in the area.

“It was friendly, everybody was nice, the food was good,” Ray Shetzline said. 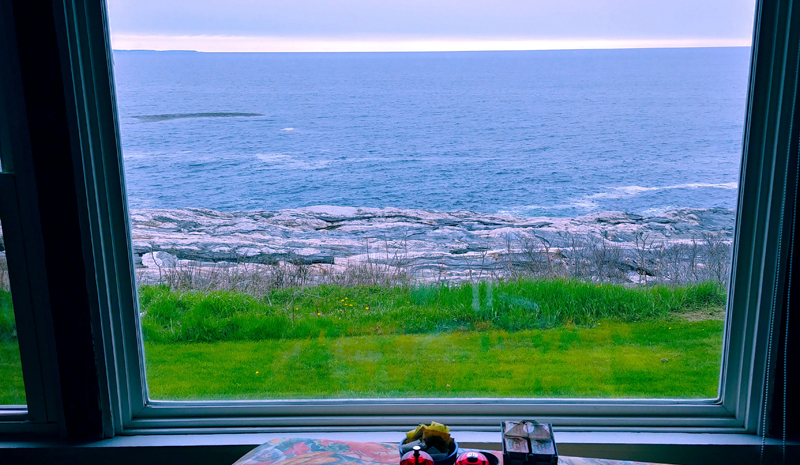 A view from inside the Seagull Shop at Pemaquid Point. The iconic restaurant and gift shop burned down Wednesday, Sept. 9. (Photo courtesy Tim Norland)

“I can still taste the blueberry pancakes,” Lida Shetzline said with a sigh.

A Facebook post on the Seagull Shop’s page announcing the news of the fire has drawn 324 comments, all expressing regret and a desire to see the shop rebuild.

Many people said they plan to visit the new location as soon as it is completed.

There were also many comments expressing regret at the loss of the webcam, calling it their connection to Maine or to family.

“People from all around the country, whenever the camera has a technical glitch, they’ll call me and say, ‘Come on, you got to get it going because that’s how we get through the winter,’” Eelman, who monitors the webcam, said. 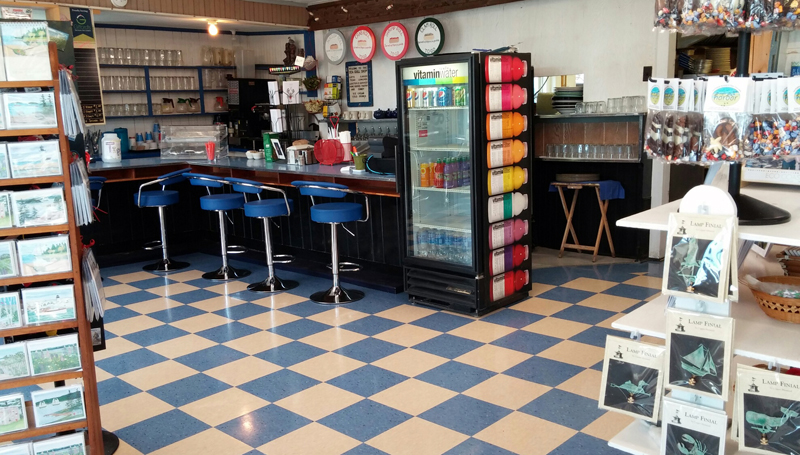 A view inside the Seagull Shop at Pemaquid Point. (Photo courtesy Tim Norland)

A comment on the GoFundMe page from Emily Bialek sums up what most people loved about the iconic Seagull Shop.

“Those morning cups of coffee, blueberry pancakes, and pies. The staff, always accommodating and polite, despite the endless line of us summerfolk and the patient locals. That webcam that reminds me that despite what turmoil our lives might be in, our peaceful spot remains. History is full of change though, and I truly look forward to seeing the Seagull rise again,” Bialek wrote.