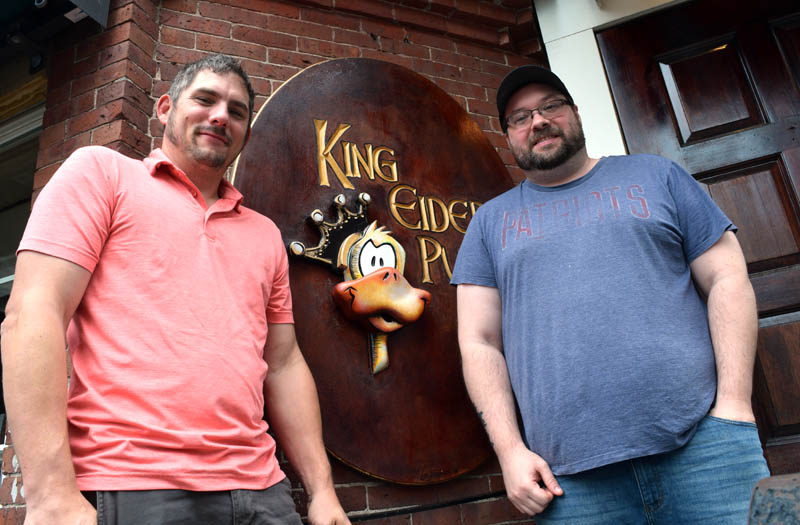 The new owners of King Eider’s Pub, former employees Scott McArdle and Damon Waltz, stand outside the downtown Damariscotta establishment on Monday, July 25. The duo said they want to keep the pub largely the same initially because they “love what it is.” (Evan Houk photo)

The new owners of King Eider’s Pub in Damariscotta are looking to maintain the iconic downtown establishment as the “same place” with the “same faces” and “same food,” new owner Scott McArdle said on Monday, July 25.

“We want to buy it because we love what it is,” McArdle said. “It’s been open for 26 years and not a whole lot has really changed. We want to keep that atmosphere and that feeling.”

McArdle has purchased the business, along with his best friend Damon Waltz, from owners Todd and Sarah Maurer and Jed and Cynthia Weiss, who have owned it since 2003. Larry and Sherry Schneider originally opened King Eider’s in May 1996.

The Maurers and Weisses will refocus their efforts toward their family businesses — The 1812 Farm and Stone Cove Catering, Jed Weiss said in a phone interview on Wednesday, July 27.

The pub has been sitting on the “50-yard line of Damariscotta” for 26 years and is an important part of the downtown area “welcoming people to town,” he said.

“The soul of King Eider’s will continue,” Weiss said.

McArdle and Waltz both started working at King Eider’s Pub as dishwashers in 1997 and quickly developed a strong bond.

One night last year, McArdle and Waltz were playing cribbage and enjoying a few beverages when McArdle brought up the idea of buying King Eider’s Pub.

“I said, ‘hey, this is our first official business meeting,’” McArdle said.

Waltz laughed it off at first before realizing his friend was serious.

“I forever wanted to run a business or own my own business,” McArdle said.

The two talked to the Weisses and the Maurers to consider logistics and the current owners helped them every step of the way. Waltz said they were “godsends” in helping to make for a “smooth transition.”

“Everything worked out and kind of played out perfectly for it to actually happen,” McArdle said.

The last day for the current owners is Monday, Aug. 1. The restaurant will be closed on Tuesday, as per usual, and then reopen on Wednesday, Aug. 3 with the new owners taking over.

McArdle was born and raised in Newcastle and has worked full time at Pine State Beverage and part time at King Eider’s for the last 17 years. He spent four years in the U.S. Marine Corps before returning to his home state. He has worked in every position in the restaurant and was most recently a server in the front of the house.

Waltz got his start as a dishwasher at King Eider’s before moving up to sous chef. He has always been a chef and has learned purely from his varied experience over the years.

Waltz worked at the Key Largo Angler’s Club in Florida for 10 years and most recently at the Kawanhee Inn in Weld for the past 13 years honing his skills.

“I have so much range, from fine dining to pub fare to everything in between,” Waltz said.

One of the biggest sellers at the Kawanhee Inn is the Steak Danahy, named after Stephanie Danahy, the chef that Waltz first learned under at King Eider’s.

The new owners don’t yet have any plans for changes, but may make some tweaks to increase efficiency. Waltz said in the winter he might try some new things on the menu, depending on feedback from customers.

King Eider’s is lucky to have an “amazing and really nice” staff, most of whom have been there for a long time.

“We’re going to learn from the staff,” McArdle said.

The two described the opportunity as an ideal situation because of their friendship and varied skills.

King Eider’s Pub is open six days a week, 11:30 a.m. to 9 p.m., Wednesday thorough Monday. For more information, go to kingeiderspub.com or find the business on Facebook and Instagram.